Who won the leaders debate? Everyone, and no one: Poll

A new poll shows that all of the leaders succeeded in rallying their bases (Trudeau appealed especially to Quebecers), but it also finds voters increasingly tuning out 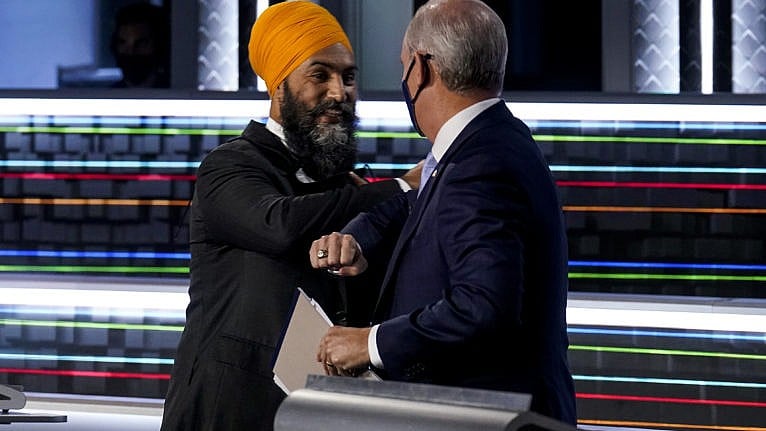 The polling consensus is a shrug emoji. The running assumption, as neck-and-neck frontrunners lay out their final arguments, is still that this election could go any which way.

Another piece of collective wisdom, with six days left in the campaign, is that last week’s debates must’ve had a favourable impact on the Liberal Party effort. Most polls show that a small but consistent Conservative lead has evaporated in the days since—despite the pummelling Justin Trudeau took on the debate stage for his six-year record as prime minister.

But is that really the case?

A weekend poll from Innovative Research for Maclean’s implies the debates had no clear winner overall, with all leaders succeeding in rallying their bases, and all leaders making better impressions on those who watched the debate than on those who simply heard about the debate.

The survey took the pulse of 1,831 Canadians Friday through Sunday. It was weighted to be representative of the Canadian population, but the pollster says margins of error are not available due to the online format.

READ: Five takeaways from the federal election debate, a disjointed but feisty showdown

In last week’s French contest, Yves-François Blanchet of the Bloc Québécois had a small edge over Trudeau among Quebec voters, while Trudeau won according to the rest of Canada. In the English edition, Trudeau won, according to Quebecers; in the rest of the country, Erin O’Toole got the best reviews, but Jagmeet Singh and Annamie Paul fared best among unaligned voters.

The same poll tracked other trends that could be more relevant as we try to divine why topline numbers are tightening in the dying days of the campaign.

Almost three-quarters of respondents, 73 per cent, say they are “very worried about what might happen to this country if the wrong government is elected.” A majority, 57 per cent, reported being disappointed with Trudeau and his Liberal government. A similar number, 59 per cent, say they are upset with his decision to call an election, though only 12 per cent would consider themselves less likely to vote Liberal as a result.

But despite their disgruntlement with Trudeau, on policy, respondents said they believe Liberals would do better than Conservatives in a majority of categories: on climate change, gun violence, women’s rights, containing further waves of COVID-19 and, by small margins, “helping people like you make ends meet,” “helping people like you get ahead” and “making housing more affordable.” Despite offering a fairly robust policy book that tried to check all of those boxes, Conservatives only have a minor edge on economic recovery, though they enjoy, unsurprisingly, a huge advantage on balancing the budget.

READ: Could it be Prime Minister Erin O’Toole?

The poll confirms that the fear of a Conservative government coming into power is lower than it was in 2019 under the leadership of Andrew Scheer—with 36 per cent of respondents agreeing that the “most important thing” in the election would be to stop Conservatives from getting into power, versus 41 per cent agreeing with the same in 2019. This could be why the Liberals have had a harder time making bogeyman attacks stick.

Perhaps the most interesting finding is one that sheds a little light on the surge for Maxime Bernier’s People’s Party of Canada, which currently sits at 6.2 per cent support in poll aggregator 338Canada’s projection.

That the Tories enjoy support from both groups will continue to prove tricky for O’Toole as he navigates his position on vaccine mandates. But that Bernier is the only comfortable choice for people who are anti-vaccine may be the bigger problem. In 2019, when the PPC was much weaker, the Tories lost a handful of swing ridings because of tiny numbers of defectors to Bernier’s tribe. The dent could be larger this time.

If a tree falls in the forest…?

An Abacus Data survey over the weekend found only 12 per cent of 2,000 respondents said they were following this election “very closely,” pollster David Coletto pointed out in POLITICO Tuesday. Another 29 per cent are following “pretty closely,” but 47 per cent only a little, and 11 per cent not at all. About a third of those who haven’t paid much attention to date are just starting to now, Coletto said.

Greg Lyle, from Innovative Research, notes there has been a recent drop in voters looking for more information from parties, from 47 per cent to 35 per cent. At the same time, respondents’ attention is “flat,” he says, with 40 per cent not hearing anything from any campaign. “This suggests as new people tune in, those who have made up their minds are tuning out.” ”

Looking at the debate-specific numbers from Lyle’s weekend poll, one of the most noticeable statistics was that the majority— of Canadians didn’t bother to watch the debates at all.

Maybe they were just exasperated at the mere thought that an election campaign is taking place. (Lyle’s poll sure seems to suggest so.) Maybe they decided to prioritize enjoying the last few days of a relatively “normal” summer before the cold weather and the school year and the Delta-driven fourth wave and the renewed social anxiety set in. Maybe they buried themselves in the TV show they’ve been binging lately, because they’re deep into season three and the important thing is to know whether Jack and Kate are going to make it off the island.

Whatever the reason for Canadians’ indifference to the debates, these numbers track closely with viewership over the past couple of elections. It is the norm.

But however this election shakes out on what’s likely to be a nail-biter of an election night, it might be worth remembering, next time, how few voters decided that watching leaders square off was worth their time. It might be worth asking what we can do to change that. Or the fact that a large minority of them won’t bother to vote at all.