Who’s going to stand up to China? This Canadian senator, for one. 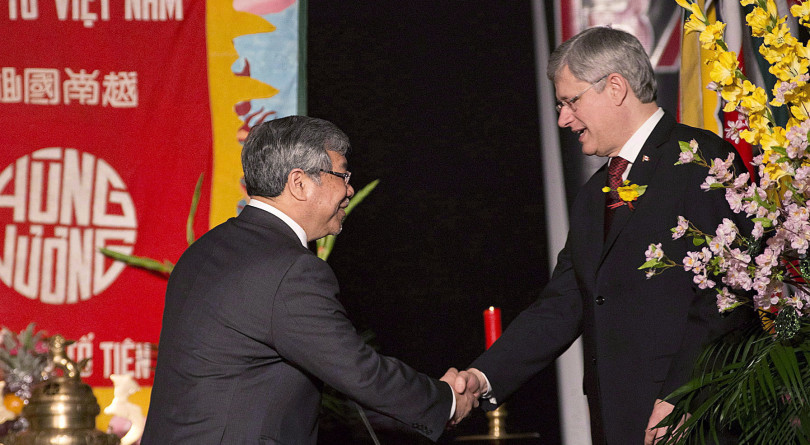 Setting aside Prime Minister Justin Trudeau’s preferred option of pretending that it isn’t even happening, there are what you could call two schools of thought in and around Ottawa about how to respond to what all sides agree is the deepest rupture in Canada-China relations since the Tiananmen Square massacre of 30 years ago.

The first is the old Liberal establishment standpoint. It’s the one that has run an almost uninterrupted course ever since Jean Chretien’s first big Team Canada mission to China in 1994, the one Prime Minister Trudeau put into hyperdrive as soon as he took office in 2015.

It’s all about a deepening of trade, political connections, cultural ties and other such entanglements, a policy enthusiastically described by John McCallum, Canada’s last ambassador in Beijing, as “more, more, more.” It would be more than fair to say that this way of looking at things has been quite thoroughly discredited in recent months, but it’s still dominant in the Liberal Party’s governing circles.

The idea is that Canada’s overarching priority at the moment should be to grant whatever concessions Beijing deems necessary in order to put things back together again. That’s how to secure the release of diplomat-on-leave Michael Kovrig and entrepreneur Michael Spavor, and it’s how to secure the lifting of Beijing’s embargo on billions of dollars’ worth of Canadian canola and pork exports. What Canada’s China-trade lobby and its variously supportive think-tanks and academic institutes want is to get everything back to the days of “more, more more,” as plausibly and discreetly as possible.

In Canada’s Senate, this remains the dominant view. And it’s strictly enforced.

An important dissenter from that view is Senator Thanh Hai Ngo, a 72-year-old human rights activist appointed by Conservative Prime Minister Stephen Harper in 2012. Senator Ngo is among a minority in the Upper Chamber whose view of the current state of play reflects the second school of thought.

In this way of looking at things, Xi Jinping’s brute-force retaliation for Canada’s detention of Huawei chief financial officer Meng Wanzhou on a U.S. Justice department extradition request is of a piece with Beijing’s long game of global domination by alternatively subverting by “elite capture” and bullying weak and ordinarily China-compliant governments of the sort typified by Team Trudeau’s government.

President’s Xi’s most recent thuggish behaviour is all in the cause of undermining and supplanting the international rules and conventions that Foreign Affairs Minister Chrystia Freeland has attempted to rally UN member states to get behind—the global order that has allowed the world’s liberal democracies to flourish over the past 70 years or so.

To the great annoyance of Liberal senators and the Senate’s mostly Liberal-appointed “independent” majority, Ngo sees things this way, and he has refused to comply with the long-standing policy dictum around Ottawa that it’s best to keep our heads down and behave the way Beijing wants in hopes of winning favourable trade concessions for Canadian corporations with business interests in China.

Ngo has fought for tough responses to the Chinese Communist Party’s persecution of minority groups, Beijing’s regional belligerence, and the Chinese state’s intrusions in Canada. Over the past three years, Ngo has put 29 questions to the government about China’s human rights abuses, its infiltration of Canadian society and its harassment and intimidation of Chinese-Canadians and Tibetan-Canadians.

Over the past year, Ngo has put six pointed questions to the government side about the Trudeau cabinet’s wishy-washy response to the danger of Canada’s fifth-generation (5G) internet auction being thrown open to Huawei. The Shenzhen telecom behemoth, an arm of the Chinese state in everything but name, is owned by a “trade union” committee that does not represent Huawei workers but rather answers directly to the Communist Party brass in Beijing. Huawei’s CEO, Ren Zhengfei, Meng Wanzhou’s father, is a ranking Communist Party member.

Recent events have proved Ngo to have been consistently right about the threats Beijing poses to the international order, and about the sinister role Beijing’s agents of influence are playing in Canada. It’s a wonder he doesn’t just burst out with “I told you so,” lean back in his comfortable seat in the Upper Chamber and just sit there from now on, watching his adversaries squirm. But Ngo is not for sitting back.

Xi Jinping is engaged in a spiteful campaign against Canada at the moment and he’s winning, hands down, says Ngo. “I think so, yes.” In response to the arbitrary arrest of Spavor and Kovrig just days after Meng Wanzhou was detained in Vancouver on a U.S. warrant involving charges of bank fraud and violating U.S. sanctions in Iran, “Canada, so far, we didn’t do anything. . . we did nothing,” Ngo told me the other day.

“I think Canada should go a different way. I don’t think we should negotiate at the moment because they’re not going to budge at all. “They don’t even pick up the phone.” Another pair of Canadians convicted on drug offences in China have recently had their sentences conspicuously elevated to the death penalty. “What did we do? Nothing.”

In the bigger picture, Canada has remained mostly quiet about Beijing’s confinement of at least a million Uighur Muslims in concentration camps in the remote and almost entirely off-limits province of Xinjiang. Ngo describes Being’s draconian measures “nothing short of a cultural genocide.” Canada has further allowed itself to become hostage to a Beijing-patrolled “One China” policy that has grossly stunted Canada’s relations with a sister liberal democracy, Taiwan.

Ngo says the reach of Beijing’s influence in Canada extends deeper than most people understand, and Canadians should pay attention to the way the Senate’s behaviour is enforced in China’s favour.

Senator Peter Harder, who headed up Trudeau’s 2015 transition to office, is a former president of the Canada-China Business Council. He’s also a former president of the Pierre Elliott Trudeau Foundation, which was controversially enriched in 2016 by a $200,000 donation from a Chinese banker and Communist Party insider. Harder is now the government leader in the 105-member Senate.

The Senate’s small “official” Liberal caucus is headed by Senator Joseph Day, the chairman of the Canada-China Legislative Association, which regularly brings together Canadian parliamentarians with China’s rubber-stamp People’s Political Consultative Conference. Even though Chinese Foreign Minister Wang Yi won’t even return Chrystia Freeland’s telephone calls, Day and a small group of legislative association parliamentarians were on a guided tour of Chinese cities just this past week. During the group’s previous tour in January, only a month after Kovrig and Spavor were whisked off to detention centres and denied access to lawyers, their case wasn’t even on the agenda, Senator Day admitted at the time.

The Conservatives claim the loyalties of 30 senators, but by far the largest caucus in the Senate is the 58-member “Independent Senators Group,” now led by one of the most controversial senate appointments in recent years, Yuen Pao Woo. The group is made up mostly of Liberal senate appointees.

While Trudeau has been choosing prospective Senate candidates from recommendations put forward by a newly-established “independent” advisory panel, the Independent bloc almost always votes with the government side. And although Woo doesn’t like being described as “Beijing-friendly,” he is rarely described any other way.

Woo’s maiden speech in the Senate was in opposition to a motion Ngo put forward protesting Beijing’s annexation of the South China Sea and its persistent defiance of international law.

Ngo’s motion was finally passed last year, but only after a great deal of procedural brinksmanship, and Ngo expects the same stiff opposition to greet the bill he’s put forward to amend the Investment Canada Act to ensure that all Canadian acquisitions by Chinese state-owned enterprises are subject to national-security reviews.

Canada can’t do much to restrain China except in alliance with like-minded democracies, Ngo says, but in the meantime there are tools at Canada’s disposal. Canada’s “Magnitsky law” has allowed Freeland to impose sanctions on notorious human rights abusers with the regimes in Saudi Arabia, Russia, Venezuela and Myanmar, but strangely, not against human rights abusers in China – not for what has been done to Kovrig and Spavor, and not even over what is being done to the Muslims of Xinjiang.

At the top of Ngo’s list: revoke Chinese ambassador Lu Shaye’s credentials and order him out of the country. “Send the ambassador home. That’s it. Let China see that we’re serious about this.”

“We have to change our course. It doesn’t work.”