Who's the real election flip-flopper?

The Liberals’ double-talk narrative on Mulcair is catching on, but who’s the real linguistic flip-flopper? 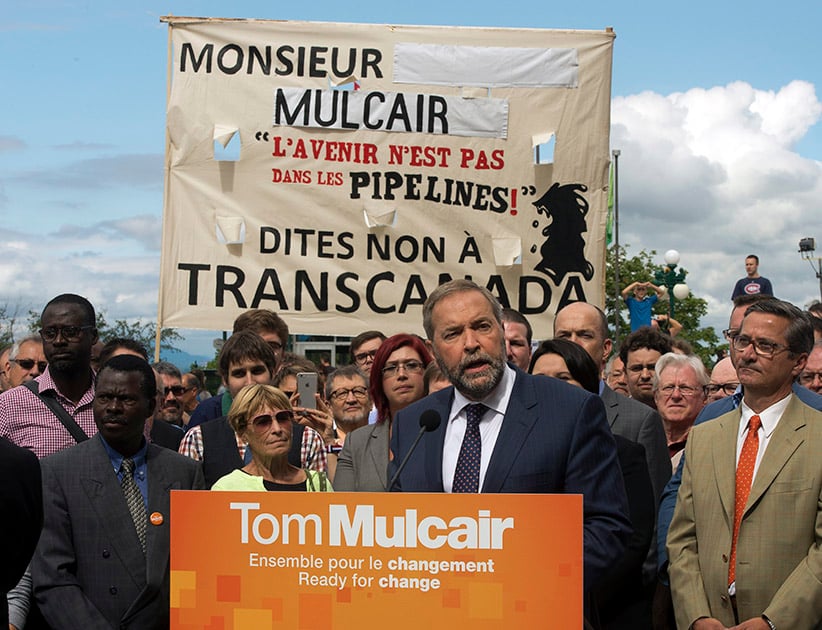 Is Thomas Mulcair really a flip-floppeur? Since the beginning of the federal election campaign, the Liberals have been hard at work trying to sell the notion that the NDP leader has a habit of saying one thing in English while delivering an entirely different message in French.

“One of the things that really frustrates a lot of people is when they see politicians pandering,” Justin Trudeau said during the Maclean’s National Leaders Debate, going on to accuse Mulcair of cozying up to Quebec separatists by talking about repealing the Clarity Act, mais seulement en français. “Anyone who wants to be prime minister . . . should not say different things in French and English.”

In the weeks since, the Liberals—still stuck in third place in the polls—have been developing the theme. Party news releases point to what they allege are other contradictory statements by the NDP leader about resurrecting the long-gun registry, supply management and free trade, and the proposed Energy East pipeline. The Liberals declined a Maclean’s request for an interview about their claims, but provided an emailed statement. “This [NDP] strategy is strictly electoral, and mirrors Stephen Harper’s divisive politics, while feeding into the growing cynicism felt toward politics and politicians,” it reads, in part.

Mulcair mostly ignored Trudeau’s jibe in the debate, but, on the campaign trail in Quebec this past week, he discovered that the Liberals’ double-talk narrative had struck a chord. At the Montreal launch of his autobiography Strength of Conviction, Mulcair was interrupted by banner-waving environmentalists shouting, “Stop Energy East!” The same thing happened the following day at a rally in Quebec City. Afterward, Mulcair tried again to find a line that might satisfy both development-hungry Albertans and risk-averse Quebecers. “It’s as big a mistake to be against something that’s never been studied thoroughly as it is to be in favour of something that’s never been studied thoroughly,” he said.

The NDP accuses the Liberals of demagoguery, saying Trudeau and his party have been cherry-picking Mulcair quotes and twisting their meaning. And, in the case of his supposed support/opposition to Energy East, they appear to have a point. Yes, Mulcair did say Tu ne peux pas approuver Énergie Est,” (“You can’t approve Energy East”) in a July interview with L’actualité magazine. But he went on to explain that was because Harper had dismantled environmental laws, making it impossible to do a proper impact assessment. He also restated the NDP’s support for the “principle” of moving natural resources from west to east, and keeping good processing jobs in Canada—an answer that, in truth, differed very little from remarks about the pipeline that Mulcair delivered, in English, in September 2012. The other double-talk examples the Liberals cite are similarly vague and debatable.

Brad Lavigne, a senior campaign adviser for the New Democrats, says the Liberals are simply making things up. “Mr. Mulcair is consistent on all of the issues, in both languages, whether he is in Calgary or Quebec City,” he told Maclean’s. “The problem they are having is that their leader isn’t up to the job, so they are focusing their guns on the NDP, while the NDP is focusing on replacing Stephen Harper and the Conservatives.”

All the fuss about Mulcair has served to obscure the fact that Trudeau’s own position on Energy East is less than crystal-clear. Last December, he gave an interview—in French—to Quebec City’s Le Soleil, in which he suggested that the pipeline didn’t have the necessary “social licence.”

“This project hasn’t yet achieved the level of acceptance it needs to go forward,” he said. It was a much harder line than he had previously taken in English, and seemed to confuse even his fellow Liberals, such as New Brunswick Premier Brian Gallant, who stood in the legislature the next day and claimed Trudeau was, in fact, in favour of the project. “I spoke to him last night . . . and Mr. Trudeau says he is for the east-west pipeline,” said Gallant. His position has since been refined even further, with Trudeau saying he won’t “fully back” the project until the public does. “We need to get our resources to market . . . and that means pipelines,” he said, in English, during a July stop in Fredericton. “But those pipelines have to achieve the public trust and the social licence that is necessary.”

Politicians speaking out of both sides of their mouths is, of course, not a new phenomenon, and Canada’s linguistic divide—and accompanying prejudices—makes such charges perhaps even easier to shill. (The idea that Justin’s father, Pierre, frequently tailored his message to suit his audience was the subject of a 2013 book by Ottawa political consultant and Conservative activist Bob Plamondon called The Truth About Trudeau.)

Whether it actually works as a campaign strategy is a bigger question. Back in April 2011, Michael Ignatieff levied virtually the same charge at Jack Layton. “He is a centralizer, except in Quebec,” claimed the Liberal leader. “He says one thing in English and one thing in French.” A few days later, Canadians went to the polls. The NDP won 103 seats, 59 of them in Quebec, and went on to form the official Opposition.