Why are MPs browsing their phones during question period?

Whether they're on Facebook, checking messages or even playing video games, mobile device use in the House is out of control 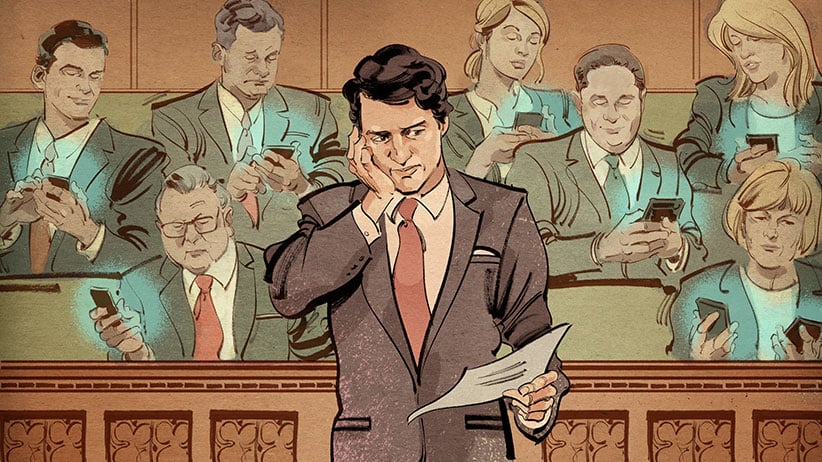 It’s a Wednesday afternoon in the House, and Andrew Scheer is at Bill Morneau’s throat trying to tear a chunk of meat off. Minutes before question period, the Conservative leader called for the finance minister’s resignation over conflict-of-interest questions that broke hard on the heels of controversy over his small-business tax plan.

A resignation isn’t remotely likely, but Scheer is looking to draw QP blood. With the pool cameras fixed squarely on the speakers, as required by the rules on televising House proceedings, the scene translates on screen as a heated and consequential skirmish.

But beyond the allowed camera angles, the atmosphere is heavy with routine slouches punctuated by restless fidgeting. Many elected officials appear not to notice the debate unfolding before them, and nearly half are preoccupied with something in the palms of their hands.

From 2:20 p.m. to 2:40 p.m. on Nov. 29—while Scheer was having at Morneau—three Maclean’s reporters tallied the number of phones, tablets and laptops they could see in use in the packed chamber. From the press gallery vantage point above the Speaker’s chair it’s impossible to collect exact statistics (photographs are prohibited), but an estimate for that moment puts 40 devices in the hands of the Liberals, and 50 in use on the opposition side of the aisle.

In Justin Trudeau’s front bench, Ralph Goodale and Chrystia Freeland are glued to their screens. Carolyn Bennett and Jane Philpott gab with each other between clicks and scrolls. Bill Casey taps away on his red-cased tablet, and Nick Whalen is enthralled with a video game—probably Clash of Clans, he later admits—on his iPad.

RELATED: Jagmeet Singh and the shunning of Parliament

Among Conservatives facing them, Dave MacKenzie refreshes his Twitter feed, Mike Lake checks Facebook, Ted Falk surveys the stock market, and Todd Doherty scrolls back and forth between his phone’s home pages as if waiting to be beckoned by notification alert. When nothing pops up, he takes out a small cloth and polishes the fingerprints off his device.

It isn’t exactly revelatory to note that handheld devices pervade about every nook and cranny of contemporary life, pushing and pulling on productivity. Visitors, however, might assume that the tradition-saturated heart of Canadian democracy, the House of Commons—where each MP sits as a representative of some 100,000 of their countrymen and women—would be an exception to these bad manners and the continually clicking rule.

But that isn’t so. Over a seven-day span, Maclean’s reporters observed four QP sessions and one special sitting in the House, and noted extensive device use during each session. The proportion of active users ranged from one third to a half of all sitting members at a given time. During each hour of question period, nearly every MP—including all sitting party leaders—at some point tapped, swiped, thumbed or scrolled a mobile device.

Maclean’s contacted close to two dozen MPs and asked about their device use in the House. Of those who responded, all said they are important tools in QP that enable them to do their job more effectively. “It’s a great research tool,” said Whalen.

Casey actually emailed from QP one day to argue that devices speed up the voting process now. “Yesterday we had 18 (!) votes which each take up to fifteen minutes,” he said in that message. “The time would be wasted without iPads.”

And Liberal MP Mark Holland noted that the inexhaustible access to the Internet better informs House exchanges. “Oftentimes in debate, you’ll hear something and think, ‘That doesn’t quite add up’,” he says. “The ability to verify that in real time I think is useful.”

But most MPs don’t claim that phones and tablets are used solely to engage more keenly in QP. Many will admit to squeezing in other work-related tasks during the hour—responding to an endless stream of emails, interacting with constituents on social media, or catching up on the news.

Some members even cop to stealing a few minutes of “me time” during QP. “I only get to ask a question once every 40 sessions,” says Whalen, a Liberal backbencher. “On days I get the opportunity to ask a question, I’m extremely focused for that 45 minutes.” Other days, he says, “I’ve on occasion played a crossword or chess.”

In practical terms, question period is largely theatre. It isn’t where laws are debated or passed, but it is a chance for MPs to put questions to the government and possibly get their face on the evening news. Ultimately, though, it’s where the opposition shows Canadians that the government is being held to account.

Still, the Liberal MP Holland is sympathetic to—and in some cases pleads guilty of—waning attention. “We’ll often spend several days on the same issue,” he says. “It can be very repetitive, and so it makes it easier for people to get lost in their messages and news and whatever else they’re doing.”

It’s not just the monotony of the House, though, that compels device use. During the Prime Minister’s sombre, historic apology on Nov. 28 to federal LGBTQ public servants who were purged from jobs for their sexual orientation or gender identity, the thumbing let up but it did not cease. Three Maclean’s reporters observed device users from the press gallery during that session. Among the many users were 31 Liberal MPs, including three cabinet ministers.

Based on Maclean’s conversations with MPs, discussions around mobile device etiquette in the chamber are few and far between. Heather Bradley, director of communications in the Office of the Speaker, notes that rules of the House permit devices at any time, so long as members don’t take photos with them (or any other camera, for that matter) and they don’t cause disturbances to other members.

The ubiquity of wireless devices in the Parliament has rarely raised complaints. However, in 2005—the year after all MPs got their first government-issued BlackBerrys—cabinet minister Joe Volpe was called out for having a cell phone conversation from the Liberal front bench during QP. “Mr. Speaker, would you please advise the House as to whether the use of cell phones is still not permitted in this chamber?” said Bloc Québécois member Michel Guimond.

Peter Milliken, the veteran Speaker at the time, confirmed that MPs weren’t allowed to chat on their phones. “They are supposed to go to the lobby to use these things,” Milliken said. “I would urge all honourable Members to cooperate. It helps to maintain order in the chamber if we observe the rules, including that one, although not all the rules are observed all the time.”

In the years that followed, as text messaging surpassed phone calls as the foremost means of communicating, MPs were able to have their devices and use them too. While members have been instructed to quell their mobile urges during committee meetings—particularly when witnesses are present—using phones and tablets during QP is now generally seen as a non-issue by MPs.

In all workplaces, the jury is still out on how much mobile devices help and hamper productivity. In 2016, the global recruitment agency CareerBuilder polled 2,186 hiring managers and 3,031 full-time employees, and found that 55 per cent of employers said smartphones were the main source of distraction for workers, and 48 per cent said they compromised their quality of work. Another 38 per cent noted that devices led to decreased morale, as other workers pick up their distracted colleagues’ slack, and 27 per cent said smart devices contributed to missed deadlines.

Certainly, replying to email on the fly can save a few minutes, but once a device is unlocked, uncommon discipline is needed to tune out the myriad other distractions the small screen delivers non-stop. “If we look at cellphone use in general, I think we’re all just probably addicted to those little machines,” says Liberal MP Joël Lightbound, speaking broadly of society’s attachment to devices.

In the CareerBuilder survey, 82 per cent of employees said they had their phone within sight at all times. A glance around the House—with a device or two tethered to most MPs’ desks—suggests a similar rate among our parliamentarians.

Elected representatives are mere mortals, subject to the same boredom and distraction as anyone else. In fact, their schedules are busier than most, and the online commentary directed at them is more relentless. MPs arrive in the House representing, on average, the interests of 92,000 constituents. To do that in a wireless world, they argue they need the flexibility to make real-time choices about when they need to listen to proceedings, and when they can afford some screen time to address other matters.

Missing a bit of a circular debate, however, isn’t the same as tuning out patches of an historic apology. Phones, tablets and laptops are as much a part of the House now as passing notes and reading the daily paper once were. But if digital modernity has taken hold, old-fashioned decorum and discretion now needs to catch up.

—with reporting by Murad Hemmadi, Meagan Campbell and John Geddes