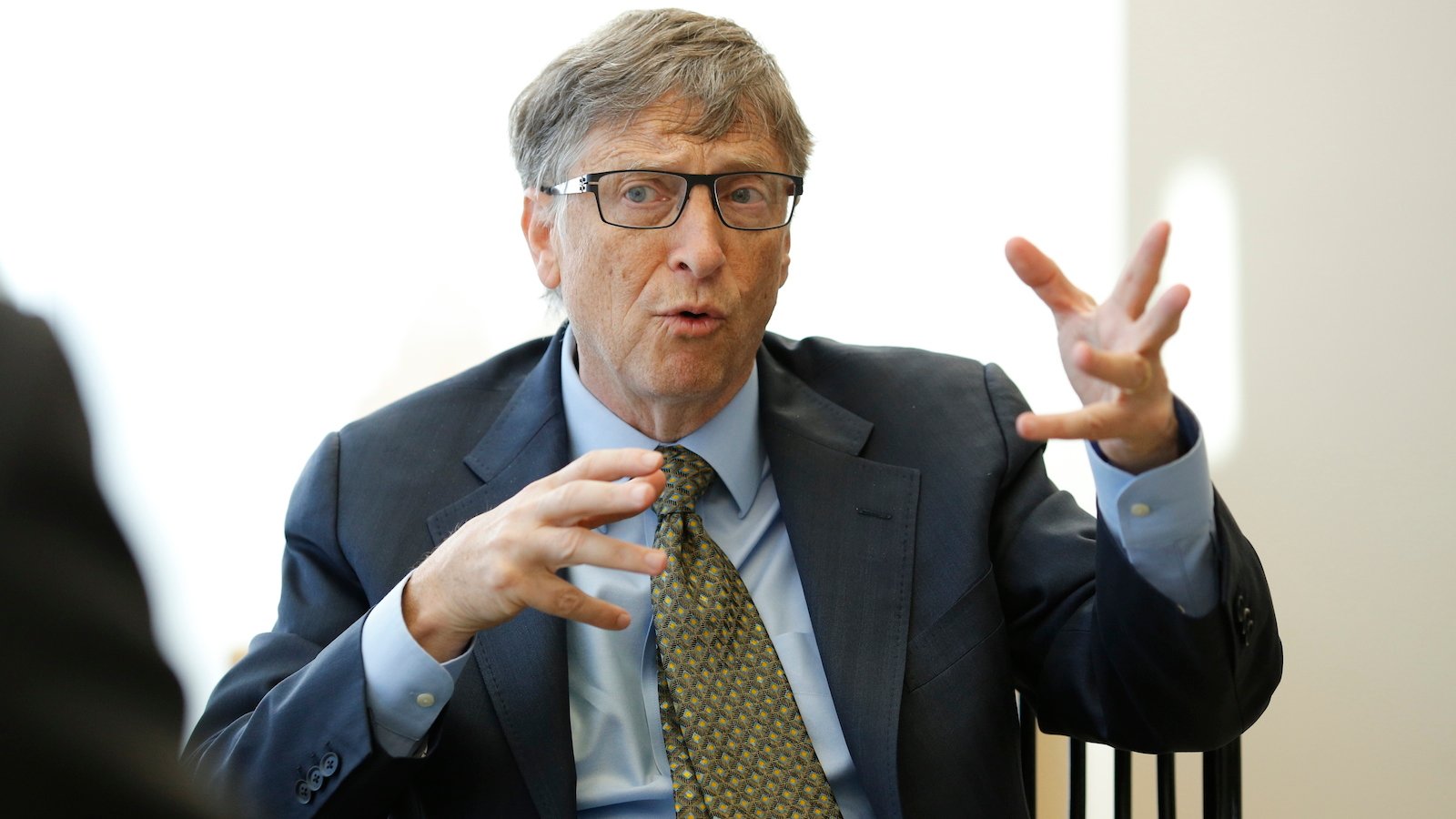 “Canada and the Gates Foundation have been on a similar journey,” the Microsoft billionaire-turned-super-heavyweight-philanthropist told my colleague John Geddes during a visit to Ottawa last week.

The Prime Minister’s Office pushed out a bunch of promotional material before and after Gates’s visit, including photos, transcripts and an extra-special edition of the government’s weekly YouTube video. This one featured off-camera questions from an unidentified female speaker (referred to, in the PMO’s official transcript of the video, as “UNIDENTIFIED FEMALE SPEAKER”) about what Gates and the federal government are doing together.

So, yeah, the staging is weird, but the quotations from both cerebral protagonists are gold. “It’s been a very strong partnership,” Gates says. “We’ve been as aligned with Canada as any partner, and very enthused about what we’re able to achieve.”

Harper speaks with real emotion about the potential of rapid progress in reducing death in childbirth and in the first years of a child’s life. “When you’re dealing with mothers and children,” he says, “you are dealing with the most fundamental building block of society. And if anything else good is going to happen in the world, it starts there.” He calls the Gates Foundation “a fantastic partner” that has “brought a kind of a business-oriented rigour” and a “focus on results [and] achievements.” 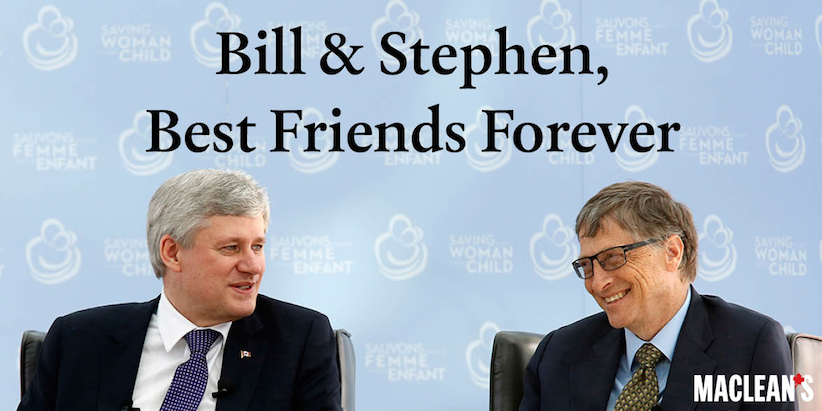 All of which raises a question: Why does Stephen Harper get along so well with Bill Gates and so poorly with Barack Obama?

The contrast is striking.“I think the relationship” between the U.S. President and the Canadian Prime Minister “is as cool as I ever remember,” Allan Gotlieb, who represented both the Trudeau and Mulroney governments in Washington in the 1980s, told the Canadian Press recently.

Harper’s office kept the White House waiting for weeks over the date of a trilateral summit with Mexico’s president, which was supposed to take place in Canada some time this year. Then Harper simply cancelled the summit. It looks for all the world as though the institution of an annual “Three Amigos” summit is dying on the vine: There were meetings every year from 2005 to 2009. Harper cancelled the 2010 meeting, which was to be in Wakefield, Que., a half-hour’s drive from 24 Sussex. Then there was no meeting in 2013. And now none in 2015. I like Gotlieb’s choice of words.

The Obama-Harper relationship isn’t overtly hostile, it’s just cool. Frosty, even. It’s true that on the main file tormenting them, the proposed Keystone XL pipeline between the two countries, the level of cross-border passive aggression is off the charts. Obama cannot mention Keystone in public without making derisive jokes about it. Harper has taken to contrasting the eternal logic of Keystone with the fleeting tenure of a President whose hostility to Keystone Harper simply cannot understand. There’ll be a pipeline someday, Harper insists, even if a future president has to approve it. Neither leader actually insults the other in public. It’s a low bar, but they manage to clear it.

But neither are the two working closely on any major international project. The days when Brian Mulroney and Ronald Reagan negotiated free trade, or Bill Clinton and Jean Chrétien hatched (doomed) ambitions of hemispheric free trade, are gone. Gone, even, are the days when George W. Bush and Paul Martin could launch the Three Amigos summits, even if Bush was barely speaking to Martin over the latter’s refusal to participate in ballistic missile defence. Today, where the Canadian and U.S. governments do work together—in Europe around Ukraine, in Africa against Ebola, and in Iraq against Islamic State—there’s no sense of shared ownership at the top.

There’s plenty of blame to go around here. Harper and Obama are similar in just about every way except ideology. They’re loners. They dislike reaching out to peers by phone, and they hate getting on a plane and visiting in person even more. But the frostiness of the Harper-Obama relationship has a lot of parallels in Obama’s relations with other traditional allies.

This is hard to write about, because Obama is such a polarizing president, even in Canada. Critics on the U.S. President’s right view him as a uniquely inept and wicked leader; defenders on his left won’t hear a word said against him. I’m an admirer, on balance, but it’s hard to remember a president who built so few strong alliances around the world. When I was complaining about the Harper-Obama relationship recently over lunch, a European diplomat leaned forward and said, “It’s the same between Obama and Merkel.” In London, the Daily Telegraph frets about the breakdown in confidence between Obama and British Prime Minister David Cameron. In Israel—well, don’t ask.

In the eternal U.S. battle between isolationists and interventionists, the former have been losing in a rout for most of a century. Obama isn’t really an isolationist, but he believes America has made its problems worse by overextending itself. He wants allies who will lighten his load, or he will do without allies.

Comparing Obama to Gates is, of course, comparing apples to oranges. Even a man as rich as Gates isn’t as rich as the U.S. Treasury: The Bill & Melinda Gates Foundation disbursed $3.9 billion in grant payments in 2014—less than one-fifth the annual budget of the U.S. government’s development-assistance agency, USAID. But USAID’s reputation is mired in decades of waste, mismanagement and willingness, for too long in the early years, to extend Cold-War power politics through other means. Gates has an altogether better image. Business-oriented, in Harper’s words. Focused on results.

Gates’s tight focus on concrete measures and defined results also contrasts with the style of an earlier prime minister’s preferred jet-setting global do-gooder. Paul Martin was so friendly with Bono, the U2 singer and crusader, that Bono addressed the Liberal leadership convention at which Martin succeeded Jean Chrétien. But Bono expressed a yearning more than a plan. He wanted Canada to spend 0.7 per cent of GDP on foreign aid by 2015. That’s today, and, despite Harper’s fondness for Gates, federal spending on development assistance is nowhere close to that mark.

Harper would argue that results matter more than total spending. So would Gates. No wonder they get along.