Why cabinet shuffles are a lot like weddings and graduations 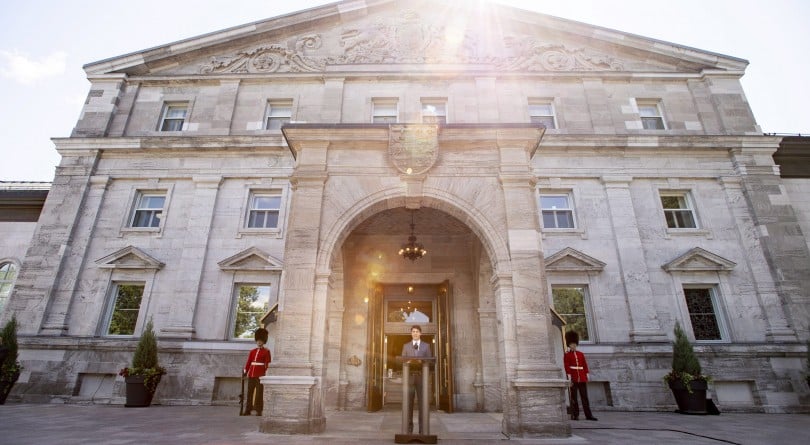 The installation of new ministers to the federal cabinet unfolds a lot like those other occasions when a bunch of nicely dressed people who are mostly strangers to one another but have a rooting interest in one of the participants gather together: weddings and graduations.

Before the swearing-in ceremony in the Ballroom at Rideau Hall on Wednesday, there were friendly greetings and introductions, cooing over new babies and the fretful redistribution of people and seating as at a wedding, with a string quartet to boot. During the ceremony itself, like any graduation, it was instantly clear which knot of family members belonged to which freshly minted or shuffled minister, by the volume of applause and location of smartphones thrust into the air when a particular person swore their oath.

Just a few minutes before the ceremony began, Kate Purchase, Prime Minister Justin Trudeau’s communications director, walked in hauling her four-month-old son, Kit, in his carseat. She walked to her seat in the second row in that unhesitating way parents do when they’ve learned to ignore the heft and bulk of a bucket seat and swing it around like a handbag. A few people scuttled over to coo at Kit, as they had when Carla Qualtrough’s chief of staff, Matt Stickney, strolled in with his three month old, Elias, a few minutes earlier.

At the back of the room, the double doors of the Reception Hall where all the ministers-designate were waiting briefly swung open, releasing a soft ocean roar of chatter. A short time later, there were two loud bursts of laughter, the cause of which no one chose to share with the class.

Then, the Canadian Armed Forces Serenade of Strings quartet cued themselves up, the doors opened, and the new faces of the cabinet walked in, with Governor General Julie Payette and Trudeau bringing up the rear. The ministers filed into the first two rows of seats, and Trudeau and Payette took upholstered chairs under the acrylic gaze of Queen Elizabeth II, whose portrait by Phil Richards—commissioned to celebrate her Diamond Jubilee in 2012—presided over the whole affair.

RELATED: Trudeau’s new cabinet: The old, the new, and everyone else

The ceremony somehow managed to be both stately and ruthlessly efficient. Each of the ministers was called to the front in turn, where Michael Wernick, clerk of the Privy Council, stood before a microphone holding the script of their oath on a mounted card, flipping it over between official languages with such understated efficiency as to render himself virtually invisible.

As Dominic LeBlanc walked over to be sworn in as minister of intergovernmental and northern affairs and internal trade, Trudeau offered a wink to his close friend. LeBlanc appeared to be the only one who earned that particular honour, but everyone got a warm hug from the boss before Trudeau presented them to Payette.

When Jim Carr returned to his seat for the first time as minister of international trade diversification, he and LeBlanc threw their arms around each other’s shoulders and offered a few mutual claps on the back. François-Philippe Champagne had just undergone surgery, and when it was his turn to be sworn in as minister of infrastructure and communities, he hobbled gingerly across the room. But when he reclaimed his seat, there was nothing delicate about the way he administered a hearty bro-shake to Pablo Rodriguez, who was seconds away from being sworn in as minister of Canadian heritage and multiculturalism.

As Filomena Tassi began to recite her oath as minister of seniors, the arms of a young woman in what was obviously Tassi’s personal cheering section shot into the air to take a series of poorly framed photos; Trudeau grinned at her. Mary Ng, the new minister of small business and export promotion, had her own phalanx of family videographers, though it must be noted with regret that of the five people shooting video of her swearing-in, three filmed in portrait mode.

After all the oaths were sworn, the paperwork signed and the new iteration of the 29th Canadian ministry was thoroughly applauded by loved ones, they all filed out again, with the Prime Minister’s personal photographer, Adam Scotti, crouched at the foot of the aisle like a wedding photographer seeking that jubilant exit shot of the bride and groom.

READ MORE: Trudeau-Ford: The next chapter in Canada’s eternal campaign

The media gathered in a penned-in area at the centre of Rideau Hall’s circular driveway to await remarks from Trudeau and his new cabinet. By the time the Prime Minister emerged 15 minutes later, perhaps two dozen tourists clustered behind the press gaggle, held at bay by security officers. The visitors looked more confused than enthralled, possibly because there was no way for them to see who the man at the podium was.

Trudeau fielded questions about how much of this shuffle was about President Donald Trump wanting to light NAFTA on fire, why the issue of irregular migrants crossing the border had been hived off from the immigration file and handed to Bill Blair, and whether Blair and LeBlanc were basically being deputized to handle new Ontario Premier Doug Ford, double-answering nearly every question in both official languages, prompted by hollered requests from the press corps.

He was flanked by two members of Rideau Hall’s Ceremonial Guard who were real, live humans by reputation only; they did not shift or blink or even seem to breathe.

One reporter asked Trudeau if he was worried about a looming conservative movement at the provincial level  affecting his agenda. “We need strong, reassuring forces to counter that,” Trudeau said. “And to demonstrate that the safety and security of Canadians and their communities is something that we will never flinch on, that we will continue to deliver, and we will deliver in a way that pulls Canadians together instead of dividing them.”

Then, in that friendly-rushed voice every single politician uses to wrap up questions while trying not to sound like they are crabbily wrapping up questions, Trudeau chirped, “Merci beaucoup, tout le monde,” grabbed his speaking notes and turned away from the podium. Whereupon a voice from the reporter herd shouted, “En français, s’il vous plaît?” Trudeau turned on his heel, stepped back to the podium with a self-mocking smirk and re-did the whole thing en français, as requested.

That time, when he thanked everyone and turned to walk away, it took.

Suddenly, on either side of the now-empty podium, the Ceremonial Guards clicked to life, executed a few crisp steps, maneuvered their weapons and lapsed back into eerie, still perfection again. Further down the driveway, the tourists appeared to have lost whatever interest they might once have had in the proceedings.

With the news of the day over and the 2019 election still far enough away for real summer vacation plans to take hold, one small corner of official Ottawa sighed back into its sunny summer dormancy.