Why Canada's military risks returning to a decade of darkness

Who would have guessed that, at the time of his most critical decision, Defence Minister Harjit Sajjan would be doing a military sample of the 1976 Genesis prog-rock song, Ripples?

“If we want to understand the ripples we are creating, we have to understand the environment we are creating them in,” Sajjan said last week. He was being asked—as he is on an almost daily basis—when he will reveal details about the long promised Liberal plan to pull out CF-18 jets from the mission in Iraq and Syria. Apparently this “ripple effect” theory is the “genesis” of the long delay. “We may not be able to control all the ripples that are out there, but we can control the ripples that we create,” Sajjan said, adding something or other about “negative ripples.”

As there is no formal military theory about “ripple effects,” it’s hard to tell exactly what the minister is talking about. But we get the gist: The decisions he makes now will have an impact on the future. The problem is, the future is already here. The Conservative mandate for the mission is up by the end of March. If the Liberals were not ready with an alternative plan—and clearly they weren’t—why didn’t they just say they would complete the original mandate and then end it? Pulling out now, after more than 100 days of post-election bombing, looks disorganized at best—at worst, it smacks of cheap politics.

Related: Why Trudeau’s crass stance on Syria is lose-lose

But as politically charged as the bombing mission is, it is really nothing compared to the deeper funding crisis facing the military. “There is simply not enough money to buy the military hardware that we need,” says Dave Perry, senior analyst at the Canadian Global Affairs Institute. Perry is to military procurement what Nate Silver is to polling, so when he crunches the numbers on the military budget you tend to listen. “There’s three times more demand for procurement dollars than there is budgeted fiscally, which means the Canada First Defence Strategy—the plan to maintain Canada’s military capabilities to protect our interests—is now, essentially dead.”

That’s a big problem. It would cost the government another $2 billion a year for 20 years, on top of what we’re already spending, just to maintain the Air Force, the Army, the Navy—and upgrade our technology for the North American Aerospace Defense Command (the NORAD commander comes to Canada later in February to demand those upgrades). Meanwhile, NATO is asking Canada to fulfill its commitment to contribute two per cent of our GDP to military spending. That would mean another $20 billion this year alone. Not happening, NATO. Because it’s 2016. And we’re still broke.

Fulfilling the military promises Trudeau made in the campaign looks equally unlikely. “The biggest one from the campaign in terms of the budget is the idea of savings tens of billions on the acquisition of new aircraft to devote to ships,” Perry says. “The $9-billion fighter budget was set when the Canadian dollar was worth 100 cents American—and now it’s 70 cents.” We’ve lost close to 30 per cent of our purchasing power. There’s no way to save on planes and still have a viable air force. 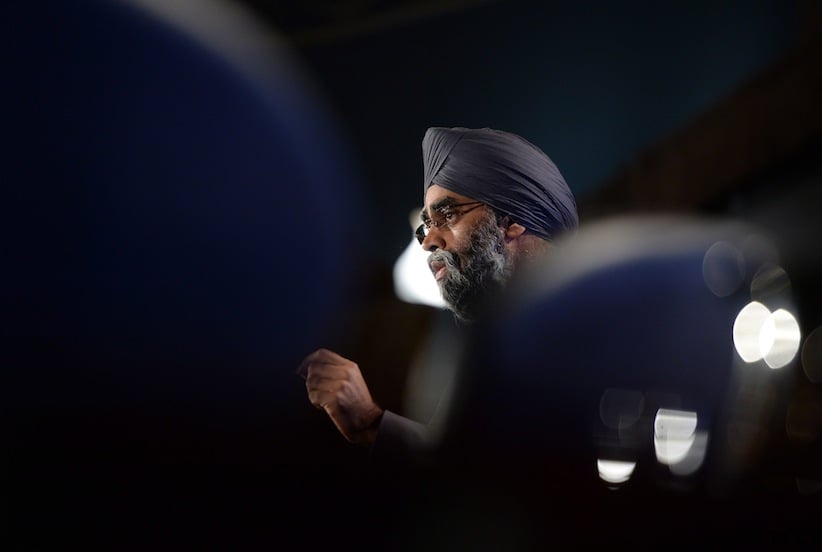 The Navy’s needs are even greater. The government has budgeted $26.2 billion over the next 12 years or so to build 15 surface combat ships, destroyers and frigates. Any savings on jets—at best a few billion—won’t make a dent in this.

Related: The sinking of the Canadian Navy

The status quo alone is fatal. “We’re spending an inadequate share of the defence budget on capital equipment—between 10 to 12 per cent over the last three years,” Perry says. The bare minimum is supposed to be 20 per cent. “That’s the lowest share of the budget devoted to procuring new kit since 1977.”

That leaves Sajjan with three choices, Perry argues. “Invest the $2 billion a year, cut our military capabilities, or cut the size of the military.” That could mean giving up on a blue-water Navy or an expeditionary air force. And the chances of new money coming? “No government of any stripe has ever invested more in the military in a time of fiscal restraint,” Perry says. Given the other Santa Claus-like promises Trudeau has made on infrastructure and health care, more money to defence is about as likely as Stephen Harper asking women to wear a niqab. Cuts, cancellations or constriction.

This is not all the Liberals’ fault. Since 2007, the Conservatives lapsed over $10 billion in military spending. They turned military procurement into a game of freeze tag: whatever they touched stopped moving altogether—from military jets to joint support ships, maritime helicopters to the tactical armoured patrol vehicles. But if the Conservatives—and the Martin Liberals—didn’t spend, at least they did what NATO insiders call “swimming.” They took on tough missions in Afghanistan and Libya. That got Canada to the table, even with a light wallet. Trudeau says he’s out of that game, which is why Perry is not surprised Canada was not invited by our allies to the recent meeting on Syria and Iraq. If we don’t spend and we don’t swim, we get shut out.

Trudeau likes to say Canada is back, but unless he has a big budget surprise for the military, we may be back to the decade of darkness that once defined the military under Jean Chrétien. These aren’t ripples. These are full-size waves.