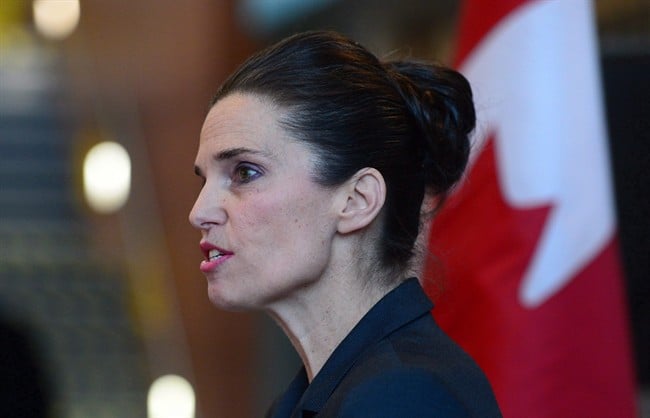 Much hubbub this morning over two interviews Kirsty Duncan, the science minister, has given the papers. The subject is Canada’s Fundamental Science Review, commonly called the Naylor Report after David Naylor, the former University of Toronto president who was its main author.

Other authors include BlackBerry founder Mike Lazaridis, who has bankrolled much of the Waterloo renaissance, and Canadian Nobel physicist Arthur McDonald. It’s as blue-chip as a blue-chip panel could be.

Duncan appointed the panel a year ago. It’s her panel, delivered by her experts. Why does it not seem to be… getting anywhere? Why does it seem to have no champion in government? Therein lies a tale.

Note, first, that Duncan’s interviews—her first substantive comment on the report’s recommendations!—come nearly three months after its April release, which in turn came four months after Duncan asked Naylor to deliver his report, last December. (By March I had started to make fun of the Trudeau government in print for dragging its heels on the report’s release. That column was not widely appreciated in the government, I’m told.)

Anyway, the report was released, at an event attended by no representative of the Canadian government. Here’s the gist of what I wrote at the time:

Naylor’s “single most important recommendation” is a “rapid increase” in federal spending on “independent investigator-led research” instead of the “priority-driven targeted research” that two successive federal governments, Trudeau’s and Stephen Harper’s, have preferred in the last 8 or 10 federal budgets.

In English: Trudeau has imitated Harper in favouring high-profile, highly targeted research projects, on areas of study selected by political staffers in Ottawa, that are designed to attract star researchers from outside Canada so they can bolster the image of Canada as a research destination.

That’d be great if it wasn’t achieved by pruning budgets for the less spectacular research that most scientists do.

Naylor has numbers. “Between 2007-08 and 2015-16, the inflation-adjusted budgetary envelope for investigator-led research fell by 3 per cent while that for priority-driven research rose by 35 per cent,” he and his colleagues write. “As the number of researchers grew during this period, the real resources available per active researcher to do investigator-led research declined by about 35 per cent.”

And that’s not even taking into account the way two new programs—the $10-million-per-recipient Canada Excellence Research Chairs and the $1.5 billion Canada First Research Excellence Fund—are “further concentrating resources in the hands of smaller numbers of individuals and institutions.”

That’s the context for Duncan’s remarks. In the Globe, she says she agrees with Naylor on “the need for a research system that promotes equity and diversity, provides a better entry for early career researchers and is nimble in response to new scientific opportunities.” But she also “disagreed” with the call for a national advisory council that would give expert advice on the government’s entire science, research and innovation policy.

This is an asinine statement. When taking three months to read a report, it’s a good idea to read it. There is not a single line in Naylor’s overlong report that calls for the new body to make funding decisions. Its proposed name is NACRI, for National Advisory Council on Research and Innovation. A for Advisory. Its responsibilities, listed on Page 19 if you’re reading along at home, are restricted to “advice… evaluation… public reporting… advice… advice.”

Duncan also didn’t promise to meet Naylor’s requested funding levels: $386 million for research in the first year, growing to $1.3 billion in new money in the fourth year. That’s a big concern for researchers, who have been warning for a decade that two successive government’s—Harper’s and Trudeau’s—have been more interested in building new labs than in ensuring there’s money to do research in them.

But let’s go back to that remark about “an unelected body making funding decisions.” A poker player would call that remark a “tell”—a gesture that gives away the game.

On to her other interview, which she gave on the same day to the National Post. Lo, Duncan makes the same rebuttal to something Naylor never asked for. “I believe that as elected officials … who are responsible to the people who put them in government, we have to be prudent with taxpayer’s money. We have to be accountable,” said Duncan. “I don’t think putting in place an unelected body, I don’t think it should have say over funding. That’s not on.”

The minister has talking points. She gave the same answer to both reporters about whether Naylor’s recommendations will be implemented in time for the next federal budget. “It takes time to turn the Queen Mary around,” she said. Twice. I’ll say it does: She’s reacting three days before Canada Day to a report that was written before Christmas. Which makes me worry when she says elected officials should be in charge of being nimble.

The Naylor report represents Canadian research scientists’ side of a power struggle. The struggle has been continuing since Jean Chrétien left office. After early cuts, he presided for years over very large increases to the budgets of the main science granting councils. But since 2003, governments have preferred to put new funding dollars to targeted projects in applied sciences. These are elaborate programs that promise to solve big challenges in science. Nobody ever checks later whether they have. The result, for most researchers in Canada, is steadily shrinking operating budgets. From Naylor: 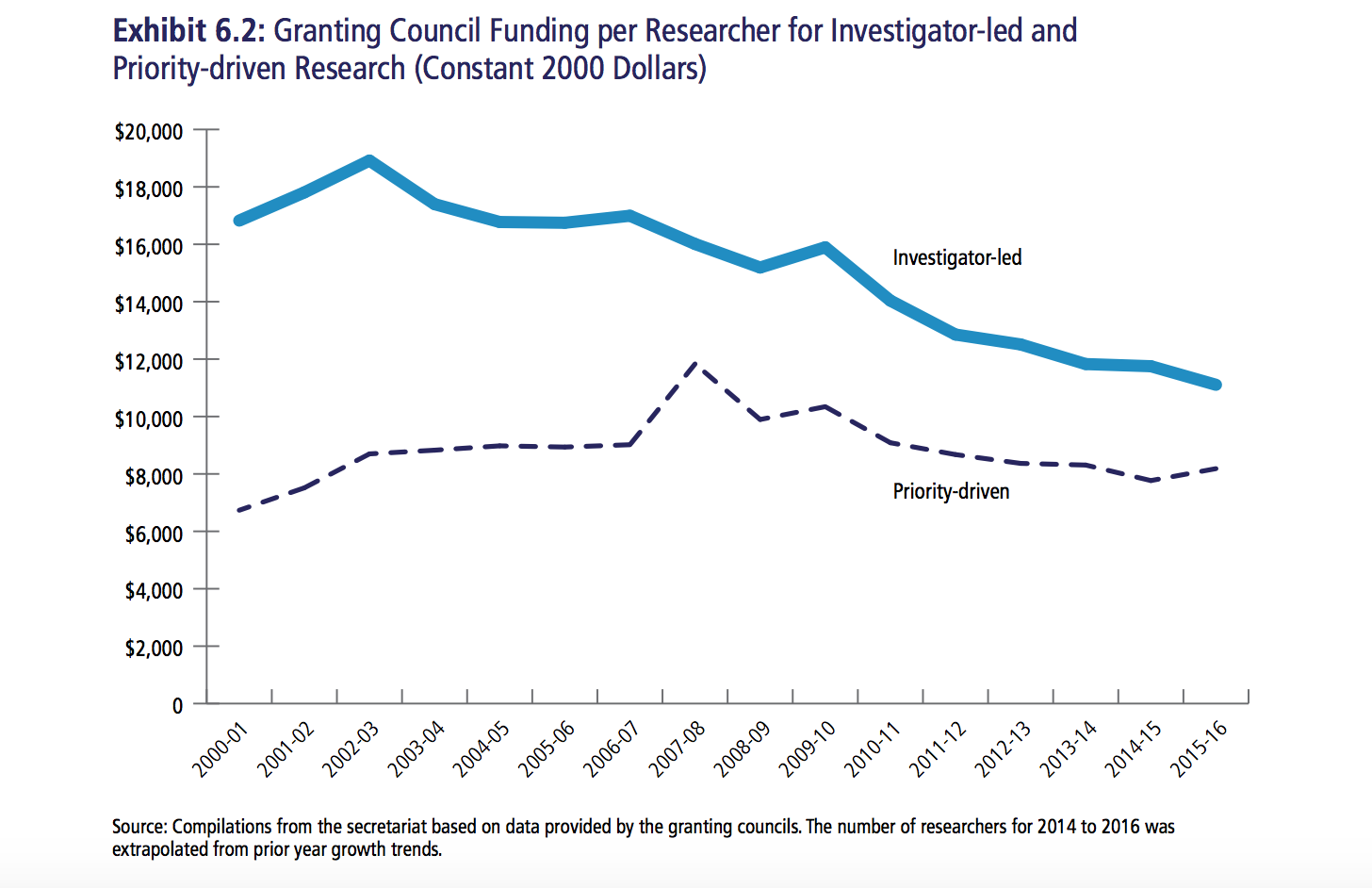 Naylor wants that trend reversed, quickly. He is supported in that call by a frankly astonishingly broad coalition of university administrators and working researchers, who until his report were more often at odds. So you have the group representing Canada’s 15 largest research universities and the group representing all universities and a new group representing early-career researchers and, as far as I can tell, every Canadian scientist on Twitter. All backing Naylor. All fundamentally concerned that new money for research is of no particular interest if it does not back the best science as chosen by scientists, through peer review.

The competing model, the one preferred by governments of all stripes, might best be called superclusters. Very large investments into very large projects with loosely defined scientific objectives, whose real goal is to retain decorated veteran scientists and to improve the Canadian high-tech industry. Vast and sprawling labs and tech incubators, cabinet ministers nodding gravely as world leaders in sexy trendy fields sketch the golden path to Jobs of Tomorrow.

You see the imbalance. On one side, ribbons to cut. On the other, nerds experimenting on tapeworms. Kirsty Duncan, a shaky political performer, transparently a junior minister to the supercluster guy, with no deputy minister or department reporting to her, is in a structurally weak position: her title suggests she’s science’s emissary to the government, but she is not equipped to be anything more than government’s emissary to science.

Here’s why it matters.

I want to tell you a story about Geoffrey Hinton. The brightest jewel in the Trudeau government’s eye, the chief science advisor for the new $125 million Vector Institute, perhaps the world’s leading star in the hot trendy field of artificial intelligence.

I’ll admit plainly that I’m slow catching up on him. My layman’s interest in science has been in other fields, so the first time I heard Hinton’s name, or retained it at least, was when a senior Liberal working for Justin Trudeau told me a year ago that one of the country’s big challenges was ensuring that guys like Hinton stay in Canada rather than being lured away by Google, which was then Hinton’s half-time employer. And now many tens of millions of dollars have been put to the task of ensuring that he does stay.

But here’s the thing.

Geoffrey Hinton’s red-hot personal reputation today is the result of conceptual breakthroughs he made in the 1980s and the 1990s and the early 2000s, when no government anywhere in the world would consciously allocate a thin dime to his work—when the particular branch of AI he has devoted his career to was deeply unfashionable among other AI researchers. He wanted to simulate brain function with vast computer networks; all the action in AI was in more streamlined methods for using logic to approximate human decision-making. The best expert opinion at the time was that massed computer firepower couldn’t possibly match by brute force what more elegant methods might achieve.

The best expert opinion turned out to be wrong, but let’s stay with Hinton. How did he survive to become a star? How did he publish the papers that made him worth huge money today, near the end of his career?

Read the papers. I read some last weekend. The “acknowledgments” section of several of Hinton’s key papers mentions that he received funding from NSERC, the Natural Sciences and Engineering Research Council of Canada—one of the very unfashionable ordinary-researcher granting councils that Naylor champions.

And the thing about the granting councils is, they fund research into interesting questions, not into keeping decorated stars home on the farm. So every once in a while, they score big. Off the charts big. Bigger than anyone could have guessed.

Hinton’s other main source of funding in those days was CIFAR, the Canadian Institute for Advanced Research, a sort of virtual university with no campus that connects experts in a dozen research areas around the world. CIFAR’s earliest online financial statement is from 2005-06, and it shows the research area Hinton led, Neural Computation and Adaptive Perception, accounting for all of $402,000 of the institute’s budget in 2007.

None of this is a secret. Last weekend’s New York Times profile on Hinton—and in Justin Trudeau’s Ottawa, there is no greater Holy of Holies than a Times profile of a Canadian who has received a grant—is all about his many years in the wilderness, and how it was CIFAR’s willingness to fund his research because it was merely interesting that made him come to Canada in 1987. Perhaps that’s why CIFAR president Alan Bernstein, who is helping to set up the new Vector Institute, is also on the long list of Naylor report backers.

So here’s what a serious government would do. Here’s what a government that thinks like a scientist, as Kirsty Duncan told the Globe she’s doing, would do. It would look at the circumstances that gave rise to one specific Geoffrey Hinton; notice that the trend of over a decade is steadily less attractive to comparable investigators at comparable stages in their careers; and conclude that it does no good to retain end-of-career stars if there is no mechanism for letting oddballs flourish.

A government that consistently buys into the market for intellectual capital at the very top of the price curve is a factory for producing white elephants. But don’t take my word for it. Ask Geoffrey Hinton.

“There is a lot of pressure to make things more applied; I think it’s a big mistake,” he said in 2015. “In the long run, curiosity-driven research just works better… Real breakthroughs come from people focusing on what they’re excited about.”

I keep saying this, like a broken record. If you want the science that changes the world, ask the scientists who’ve changed it how it gets made. This government claims to be interested in what scientists think. We’ll see.