Why Conservatives need to shake up their leadership debates

The Tory leadership debate at the Manning Conference offered a different format, but no one was knocked off finely tuned talking points 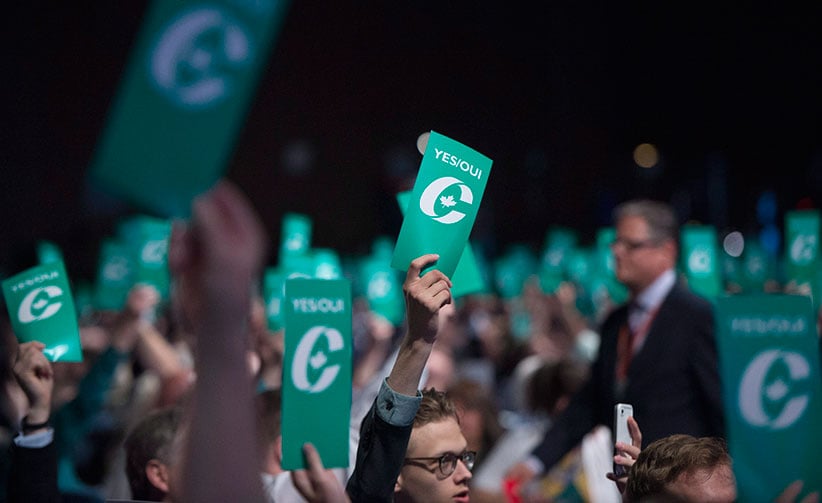 Delegates raise their yes vote cards to change the wording of the traditional definition of marriage in the conservative policies at the Conservative Party of Canada convention in Vancouver, Saturday, May 28, 2016. (Jonathan Hayward/CP)

Well, let’s start with the positive: the Manning Centre organizers kept their promise to deliver a “unique” debate experience, at least in contrast to the majority of the fourteen-wide face-offs that have characterized the race so far.

Instead of lining the stage from curtain to curtain with candidates, they drew names from a hat and called them on stage in groups—two groups of four and two groups of three—with one topic per mini-slot, complete with answers, rebuttals and even the occasional outbursts of direct interaction between the candidates.

MORE: What made sparks fly at the Conservative leadership debate

Serving as moderator was the inimitable Tom Clark, who signed off his journalistic duties at Global News earlier this year to take up a government relations gig at Global Public Affairs, but handled his brief return to the interview chair with ease and obvious enjoyment, even—or possibly especially—when he was obliged to cut the mic on an overly loquacious contestant.

(Those TV host reflexes stay sharp for at least a few months after hanging up the earpiece, apparently.)

What was clear, however, from the post-debate chatter at the meet-the-candidate reception that capped off the official conference activities for the day, was that it still wasn’t enough to knock the contestants off script and into the sort of spontaneous, off-the-cuff exchange of views that can, in a nanosecond, change the course of a campaign and, eventually, Canadian political history.

Leitch reminded everyone of her plan for face-to-face screenings at border crossings. Scheer praised pipelines. Chong defended his proposal for a “revenue neutral carbon tax.” Bernier decried supply management. O’Leary raged over deficits and taxes—particularly provincial. Andrew Saxton reminded everyone he was, and is, a businessman. Brad Trost and Pierre Lemieux—who, by an impish twist of fate, ended up in the same block, competed for the title of most social conservative-friendly option on the ballot. Steven Blaney suggested luring in Millennials by pitching more relaxed gun laws.

At a certain point, it all became a blur—even O’Leary, who, for all his bombast, is just as prone to breaking out the talking points as the rest. Then again, as a TV guy, perhaps that’s not surprising.

In any case, with just over two months left on the campaign clock, there are still at least two more party-run debates on the calendar—one next week in Edmonton, another at a still unannounced location later in the cycle, and unofficial but sanctioned events in Burlington and London.

While it’s unlikely that the party could get away with dropping the full line-up in favour of breakout sessions—campaigns tend to get touchy when it comes to anything that could be seen as giving an advantage to one candidate over another, even if determined by random draw—they could always approach it from the other side: namely, the questions.

Virtually every debate thus far has included at least one segment on Canada-U.S. relations, and how one should deal with the new occupant of the White House, for instance.

The wording may change, but the overall thrust is the same, and as a result, so are the answers.

The same goes for immigration, security, the environment, the energy sector and balancing the budget. That’s not to say these aren’t important questions, of course—but it’s fair to say that they’ve been answered. Why not come up with some new ones, even if it does veer away from those cornerstone issues?

How many times, after all, does one need to hear Kellie Leitch proclaim the importance of Canadian values without actually explaining what she means by that term?

(An alternate strategy would be to empower the moderator to take a more aggressive approach to eliciting actual answers, but that carries its own risks.)

One area that has been largely, though not completely, left off the agenda to date has been the party itself: from keeping the coffers filled to recruiting candidates to making sure that grassroots members have a voice in determining official policy. It may not play to the outside crowd, but for the card-carrying party faithful, it could be crucial in deciding who to trust with the keys to the big blue machine.

At the very least, it might prove informative in revealing just how well O’Leary, an admitted newcomer, understands the traditions and culture of the party he professes to want to lead.