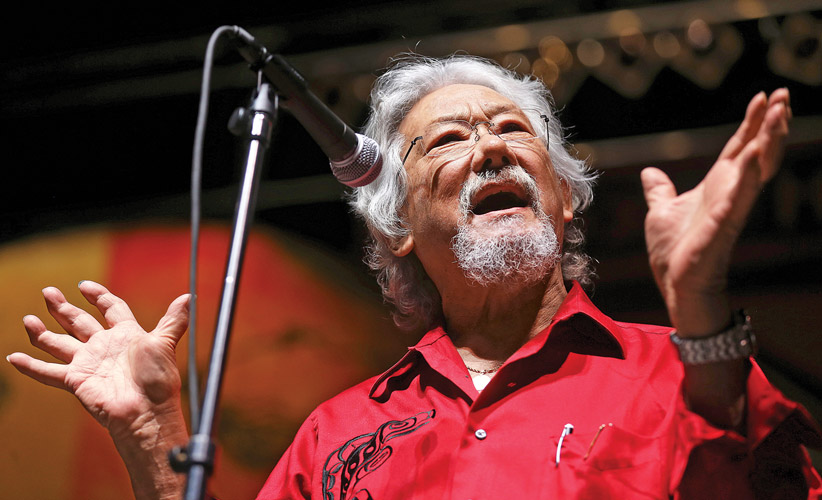 During a testy phone call, Justin Trudeau dismissed David Suzuki’s views on the Liberal climate change policy as “sanctimonious crap,” according to Suzuki. Suzuki revealed the contents of the conversation during an interview on SiriusXM’s Everything is Political with Evan Solomon. Suzuki says he fired back, calling Trudeau a “twerp.”

The renowned scientist, broadcaster and activist says Trudeau called him personally June 28, 2015, to talk about the Liberal platform on climate change that was to be revealed the next day. “I didn’t call Justin, he called me,” Suzuki said. “He wanted an endorsement and he wanted to tell me exactly what his program was.”

For the record: Justin Trudeau’s speech on the environment: June 29, 2015

The program includes support for the Keystone XL pipeline, a rejection of the Northern Gateway pipeline and a commitment to work with the provinces to establish a cap-and-trade system.

“I said, ‘Justin, stop it, you’re just being political, you just want to make headway in Alberta,’” Suzuki says he told Trudeau. “You’re for the development of the tar sands, you’re for the Keystone pipeline, but you’re against the Northern Gateway, you’re all over the damn map!”

Maclean’s explains: Where the leaders stand on the environment

Suzuki went on to advise Trudeau that taking the target of a two-degree rise in temperature seriously means 80 per cent of the oil sands has to stay in the ground. Suzuki believes stopping oil sands development will mean “no debate about pipelines or expanding railways or shipping stuff offshore—none of that comes into it.”

Suzuki says this is when the exchange turned nasty. “He said, ‘I don’t have to listen to this sanctimonious crap.’ I proceeded to call him a twerp.”

Trudeau ended up with the support of environmental scientist Wade Davis, an honourary board member of the Suzuki Foundation. Davis introduced Trudeau at his Vancouver event the next day.

No Liberal would comment on the exchange, but sources tell “Everything Is Political” that Trudeau was not formally seeking an endorsement, but rather making a courtesy call to Suzuki about the plan.

Suzuki says he has not spoken to Thomas Mulcair or Stephen Harper about their climate change or their plans for the environment. “My feeling is that none of the parties except for the Greens is really taking it seriously.”

During the conversation with “Everything Is Political” Suzuki also said he is troubled by the debate about the niqab and Stephen Harper’s use of the term “old stock Canadians.”

“The ‘old stock’ sent a shiver up my back,” Suzuki said. During the Second World War, Suzuki and his family were among thousands of Japanese Canadians interned in camps. “I’ve lived through a time when my Mom and Dad who were born and raised in Canada couldn’t vote. ‘Old stock’ implies that somehow there is difference if you are a Canadian, that there are differences that matter.”

Suzuki says such distinctions invite divisiveness. “Either we are citizens or we are not,” he said. “It’s very scary to me.”