Why didn't the CBC run any of the federal debates?

There have been five federal leaders’ debates. But despite feeds being available, the CBC has aired none of them. 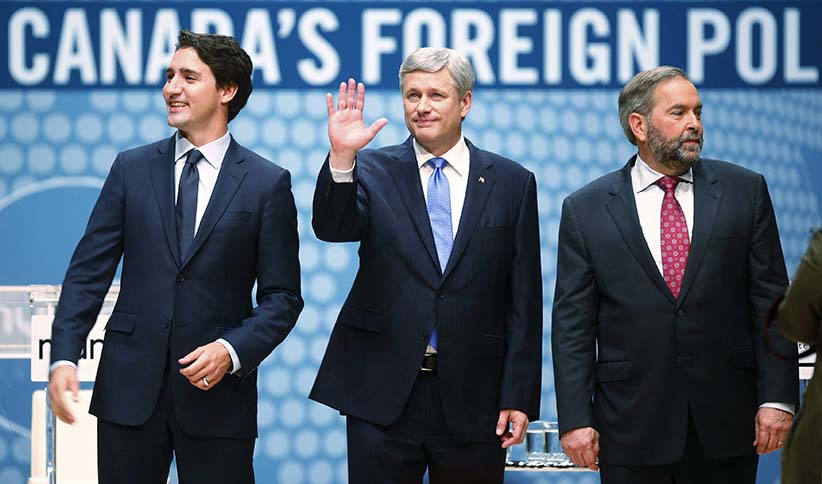 Rave reviews of last Monday’s federal leaders debate must have swelled hearts at the Munk Debates, the host of the event, and nowhere was the praise more lavish than on Canada’s public broadcaster. “The best debate by quite a bit,” enthused pollster Bruce Anderson afterward on CBC’s The National. “It was forward-looking and it was values-based and it was a nice mix of emotion and fact-based argument.”

Anderson was voicing the unanimous verdict of the influential At Issue panel—columnists Andrew Coyne and Chantal Hébert were similarly impressed. But the superlatives highlighted the singular weirdness of the Mother Corp. treating an event many of its viewers hadn’t seen as the biggest story of the day. If the debate was so great, why didn’t CBC air it?

It’s not as though it was shut out. The Munk Debates had made their television feed available, gratis, to any network, station or website that cared to run it. But the uptake was less than overwhelming, as only CPAC, the public-affairs channel owned by cable providers, and CHCH, an independent station based in Hamilton, nabbed the free content. The same fate befell the Sept. 17 debate hosted by the Globe and Mail and Google Canada, whose feed was also made available for free, in the hope it would attain greater reach.

No surprise, then, that viewership of both fell far below what organizers might have hoped. The Globe debate’s aggregate TV audience—the total number of viewers who tuned in at any point during the two hours—was 1.87 million, while preliminary numbers suggest the Munk debate pulled about 1.5 million, a CPAC spokeswoman said. (Neither figure counts viewers who watched on YouTube channels or websites.) The boost provided by a multi-channel TV presence was evident after the Aug. 6 debate hosted by Maclean’s, which attained an aggregate TV audience of 3.8 million, thanks to the magazine’s corporate cousins CityTV and OMNI running the feed along with CPAC, while an additional half-million watched online. Maclean’s owner, Rogers, offered live use of its TV feed for a fee, and webstreaming access alone for a lower cost. None of the major networks took them up on it.

That private networks such as CTV and Global should, on their own, pass on a political debate probably shouldn’t shock us. Pre-empting scheduled programs, purchased at high prices from Hollywood, can put a network at a competitive disadvantage, costing viewers and, ultimately, advertising dollars. That’s part of the logic behind the traditional “consortium” model of organizing debates: If all the big networks run them, each serves the public interest without risking its own neck.

The CBC’s position is more complicated. Yes, it competes with the privates. But it also receives an annual federal subsidy meant to insulate it from competitive pressure, so it can serve a public-interest mandate. That mandate, to paraphrase the Broadcasting Act, requires the CBC to “inform and enlighten” with nationwide programming “by the most appropriate and efficient means and as resources become available for the purpose.” Surely, a federal election leaders’ debate—professionally produced and available free during prime time—fits that description.

But the broadcaster has been resolute. When contacted last week by Maclean’s, Chuck Thompson, head of public affairs for CBC English services, said it has passed on the debates due to lack of editorial input into the broadcasts, adding: “We have provided comprehensive coverage, on all our platforms, for every debate.” A CTV spokeswoman declined to comment.

Elly Alboim, a broadcasting veteran who has been following the debates closely, rejects the CBC’s explanations, noting that it has, in the past, flipped to live BBC coverage of U.K. elections, or CNN feeds during disasters, with zero input on content. Every Saturday night, it runs Hockey Night in Canada broadcasts produced entirely by Rogers, the national NHL rights-holder. Rather, Alboim traces the network’s reticence to the consortium’s failure last spring to reach an agreement with the federal parties on the number and timing of leaders’ debates—a breakdown that opened the door this year to other host media.

“After that,” says Alboim, a former CBC Ottawa bureau chief who has helped to prep federal and provincial leaders for debates, “I think the CBC should have evaluated the circumstances, and considered whether that changed its obligations as a public broadcaster.”

Viewers, he explains, are biased in favour of established networks. That means an event on CBC will pull bigger audiences than the same one on CPAC. (The sole leaders debate of 2011, which ran on CBC, Radio-Canada, CTV, Global and Quebec’s TVA, reached a total of 10.6 million viewers.) “The CBC had a responsibility to lend its reach to these debates,” he concludes. “It should have taken the feeds.”

The alternative? Acting as if these events of central import to the future of the country are somehow locked away from the CBC (not true), or that they’re somehow less legitimate than consortium debates (absurd). Thompson denies recent speculation that the big networks have made a pact not to air the feeds in order to push the parties back into the arms of the consortium. Whatever their rationale, the CBC would be well-advised to revisit it. What it has seen this year from the sidelines might be a glimpse of the future. A little co-operation seems to be in everyone’s interest.

Correction: An earlier version of this story linked the debate to the Munk School of Global Affairs at the University of Toronto. The Munk Debates are a separate organization from the Munk School.