Why Elizabeth May is not going away 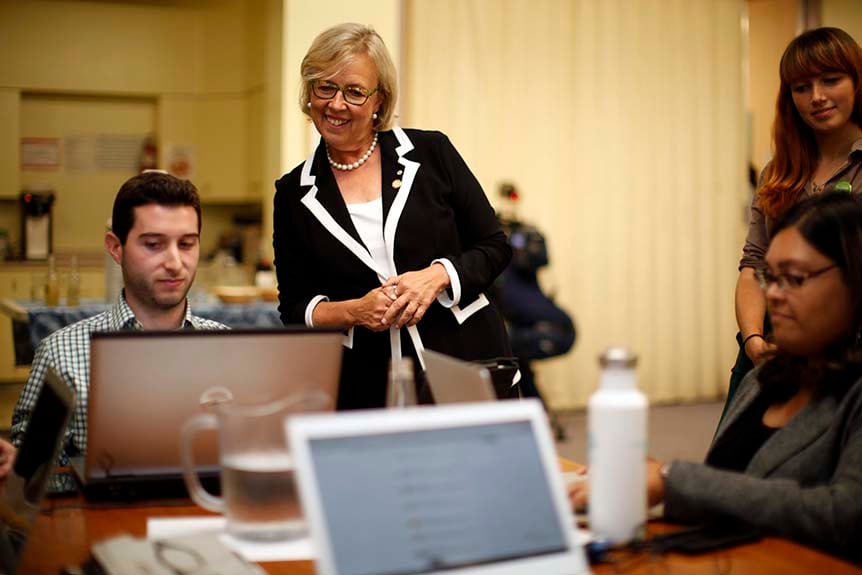 Green Party leader Elizabeth Mays’ 30-second pre-amble is uploaded to Twitter as she live-tweets to leaders during the Globe and Mail leaders’ Debate from Victoria on Thursday Sept. 17, 2015.  (Chad Hipolito/CP)

Green Party leader Elizabeth May’s decision to video tweet from a Victoria church her responses to the Globe and Mail leaders debate in Calgary was no last-minute decision. Her communications director Julian Morelli began discussions with Twitter Canada in September 2014 in case Conservative, New Democrat and Liberal leaders shut her out of debates. The result: May earned more than 1.7 million Twitter hits, was retweeted 14,000 times and gained thousands of new Twitter followers. “We won the debate because we weren’t invited,” says Morelli. May spoke to Maclean’s about the debate aftermath from her Vancouver Island riding of Saanich and the Islands.

Q: This whole Twi-bate, I suppose we could call it, seemed to come as a surprise but I gather it’s been in preliminary discussions with Twitter for many months?

A: Yes. We kept it under wraps partly because there was always the chance and we hoped the Globe and Mail would see the error of its ways. I know they were receiving tonnes of subscriber letters and pressure that this didn’t make any sense. We kept open the possibility to the last minute that they might relent and realize this is foolish, especially when the Maclean’s debate went so well with four leaders on the stage.

Q: You are a major tweeter, but this idea wasn’t without risk, not just technically, but the possibility that it would be seen as gimmicky. What convinced you to press ahead?

A: I didn’t have any hesitation partly because I knew it was used in the U.K. election. I am a fan of social media. I’m probably the least likely of people in politics to be a fan—I’m the oldest of the leaders and I’m a bit of a technophobe. I started using Twitter and finding it a major connection. Anybody across Canada can ask me anything, and if it appears to me that they’re seriously asking a question—I’m not interested in abuse or harassment—I’m very accessible. It will seem foolish to you, but during the entire 2011 election I was writing my tweets but someone on my staff was posting them because I was sure it was complicated. At the end of the election I had 8,000 Twitter followers. [During an overnight Commons filibuster] I sent [my assistant] a message: give me idiot-proof instructions for how I can do Twitter myself. I couldn’t believe how simple it was! My Twitter following started growing then. It was over 175,000 before the Twitter approach to getting into the Globe and Mail debate. I’ve got 186,000 Twitter followers now.

Q: Impressive. You also got 1.7 million Twitter “impressions,” whatever that means.

A: It sounds good. I’ve personally sent out 29,000 tweets. I’m responding directly. Sometimes people are reaching out with really personal problems. Sometimes I’ve developed relationships where I’ve gone to direct message to try to reach out to people. This is both an anonymous medium, but also a place where somebody can put something that really is a cry for help.

Q: Wasn’t there a risk of going to battle with, as you called it, the Glib and Male—the host of this debate? Don’t you know not to feud with those who buy ink by the barrel?

A: I know. I loved the quote from Paul Martin that ‘a politician who complains about the media is like a sailor who complains about the sea.’ But this is a very serious offence the Globe and Mail has committed. It injected itself into the election campaign by making up new rules. The  Munk debates is not a media. They don’t have any pretense of neutrality or serving the public interest. But the Globe and Mail is our national newspaper. I respect the journalists at the Globe and Mail enormously. I think this was a management decision and that it was part of a corporate strategy to assist the Conservatives in destroying the national televised leaders debate [conducted in past elections by a consortium of national broadcasters]. I think it’s a very serious problem. It’s great to have additional debates, and that’s where Maclean’s was really helpful. But the national English language leaders debate has a reach that far exceeds anything we’re going to get on social media. It reached 10 million Canadians in 2011. The decision by Stephen Harper to stay out of that debate is unprecedented and shocking. I think Mr. Mulcair had make a terrible mistake, both strategic and ethical, in saying he won’t show up either.

Q: Now as I understand it your intervention was shot on iPhone 6s. That’s a pretty modest way to achieve a national reach. I’m wondering what lessons that established media—both television and print—should take away from this?

A: I think that the democratization of media is more possible now than in the past. Our Twitter debate will never replace having a fair and neutral nationally televised broadcasters’ debate that reaches millions of Canadians all at once. I think it’s critical that debate takes place. The idea of going to Calgary and banging on the door, that’s not me. But this virtual insertion into the debate was. I was as respectful as if I was in the room. It’s important to provide the full range of views. The idea that it was appropriate to keep out a party with two seats in the House of Commons is really quite shocking. So what we learned from Twitter is we don’t have to take no for an answer.

Q: How important was it to have a Green—and a woman—weighing in on an economically focused debate?

A: My absolute favourite comment from the Maclean’s debate was the blog on Canadian Business that said there was only one leader on the stage who understands the economy, and that’s Elizabeth May. We do understand the economy and we’re pragmatic and practical and grounded in economic reality and have good policies. It simply can’t be right that every answer to a question on the economy is the NDP talking about child care, and Stephen Harper talking about “we’ve done a great job managing the economy,” as opposed to a reality check on that. I don’t want to sound self-serving but in terms of how little girls and young women see themselves in Canada’s political life, it’s egregious to keep out the only woman leader. In terms of the issues to be discussed, it’s egregious to lock out the only party that’s paying attention to international investment treaties, that’s talking about the global financial situation and the failure to bring in any measures after the September crisis of 2008 to make sure it doesn’t happen again. We bring a lot of economic issues to the table with different perspectives.

Q: You’re unlikely to form government, I hate to break this to you.

Q: But in a best-case scenario you’ve talked about perhaps holding the balance of power in a minority government. So based on what you saw in the debate among those three fellows, which party would you prefer to work with?

A: I really think it doesn’t matter to me. I know Tom Mulcair and I know Justin Trudeau very well. I know their policies very well. I prefer the Green Party’s policies but that doesn’t mean I can’t work with either of them. It just depends how Canadians vote and what the seat count is at the end of the election.