Why Kent Hehr had to go

The woman who accused Hehr of inappropriate behaviour recalls her encounters with him. “The very first time I was in an elevator with him, he said: 'You’re yummy'” 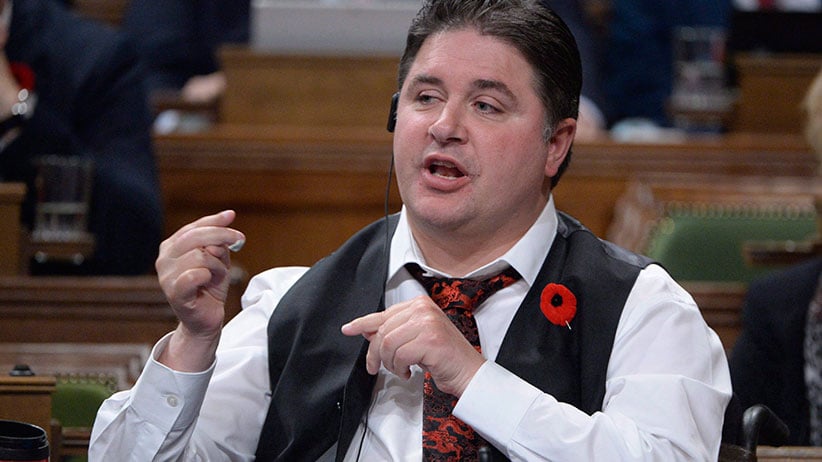 Minister of Sport and Persons with Disabilities Kent Hehr is shown during question period in the House of Commons, in Ottawa on Monday, Oct. 30, 2017. THE CANADIAN PRESS/Adrian Wyld

Amid the reckoning of #MeToo, events unfolded quickly. On Tuesday in Davos, Trudeau called sexual harassment in business and politics “a systemic problem and it is unacceptable—as leaders, we need to act to show that truly, time is up.” On Wednesday news of sexual misdeeds abruptly ended the tenure of Progressive Conservative leaders in Ontario and Nova Scotia. And in Edmonton, Kristin Raworth was discussing her own uncomfortable encounters with a politician she’d been warned about, and was inspired to go public about a sitting federal cabinet minister.

Then on Thursday morning, the Prime Minister’s Office contacted Raworth to inquire about launching an investigation. By the afternoon, another accuser spoke about inappropriate behaviour. Then, Prime Minister Justin Trudeau announced Kent Hehr was leaving cabinet, pending investigation.

To say this leaves the Calgary MP’s political career in tatters would be to overlook the slow burnout of this once-rising star, a rookie Liberal MP left quadriplegic 27 years ago by a drive-by shooting. His subpar performance as Veterans Affairs minister prompted Trudeau to demote him in August to Minister of Sport and Persons with Disabilities, no longer in charge of a full government department. Months later, people who’d met with Hehr, 48, on thalidomide and veterans’ issues accused him of brash and insensitive remarks in meetings.

Those, Trudeau was willing to tolerate without further punishment. Because to further discipline the lone cabinet minister would be to abandon Trudeau’s grand project to woo the city his father’s energy policies had left bitter for decades. (The other Liberal who had won in Calgary besides Hehr, Darshan Kang, had already left caucus over sexual misconduct allegations.)

Liberals hadn’t won seats there since 1968, and Trudeau had invested time and a bunch of pro-pipeline and pro-oil sentiments in order to end the drought. But if Trudeau wishes to declare “time’s up” and solidarity with the #MeToo movement, there are compromises to other priorities he must make. While Hehr currently remains in caucus, should an investigation affirm allegations from his days as an Alberta provincial legislator, the Liberals’ Calgary caucus may be reduced to zero even before voters got a chance to appraise the governing party’s worth.

Raworth joined the Alberta legislature staff in mid-2008 at age 25, as an aide to two Progressive Conservative MLAs. New colleagues filled her with whispered warnings. “Almost immediately, that was communicated to me: try not to be alone with Kent Hehr. Don’t get in an elevator if you can avoid it,” Raworth recalls. Hehr had been newly elected as an MLA a few months earlier, after spending years as a lawyer, and nearly two decades removed from the junior- and college-level hockey locker rooms of his pre-shooting days.

“The very first time I was in an elevator with him, he said: ‘You’re yummy’ ” Raworth says. That happened the summer she started. She wound up in the elevator with him a second time: “He was mumbling and getting way too physically close to me in the elevator,” she says. “It was always that feeling him looking at you or making you uncomfortable.

“At the time I was 25 or 26 years old, and for me working at the legislature was a dream. I’ve been a political geek my whole life, and that was a very sobering moment of realizing that political figures weren’t untouchable, in the sense that they weren’t perfect.” Raworth left the Alberta legislature after one year for a job at Edmonton City Hall, and now has a non-partisan job for Alberta’s environment department.

After Trudeau announced Hehr’s cabinet resignation, the Calgary MP said he’d stay on in the House of Commons, and welcomed the investigation.

“The conversation our society is having is a very important one,” his statement reads. “I encourage all women who have felt uncomfortable or who have experienced harassment of any kind to continue to come forward. It is never okay.”

Raworth isn’t the only Alberta politico who had heard about Hehr’s misbehaviour. An Edmonton-based federal Liberal party member, who spoke on the condition she remain anonymous, spoke with City News. “I’ve met him three or four times and the suggestive comments have been made every time I have seen him,” she says.

“There is a feeling when you pose for photos with him that he’s … too friendly with his hands. It is not the standard sort of photo, where you stand next to the politician and he may put an arm on your shoulder. With Kent, it feels like he is getting into your personal space. My husband was present during one of the interactions. Kent didn’t realize my husband had observed it.”

She added: “There is a lot of ableism involved with Kent Hehr, because no one wants to be mean to the guy in the wheelchair”

READ: Me too: It’s not just Hollywood, it’s Canada

Hehr, a C5 quadriplegic confined to a wheelchair, is unable to drape his arm casually over a constituent’s shoulder. But he’s also uniquely outgoing–willing and comfortable with rolling around grocery stores in his Calgary riding to chat with people, which may come off as charming to many people in a way it would never if an able-bodied politician saddled up to a shopper in the produce aisle. And he’s spent most of his political career as a provincial opposition backbencher, where his conduct and behaviour garnered far less scrutiny and often carried fewer consequences than they do for a federal minister—and occurred when women were less likely to speak out (or be trusted) regarding sexual misconduct of figures of any stature.

Raworth didn’t complain in 2008, because she feared compromising her dream job. “If I said anything, I would be labelled as difficult or labelled as someone who wouldn’t play the game,” she says. She doesn’t belong to the federal Conservatives, and says this isn’t a partisan issue. Almost every woman she knows in politics has experienced similar harassment or worse.

David Swann, who led the Alberta Liberal party during part of Hehr’s two terms, said in an 2016 interview his colleague would often spend long nights out at pubs with younger legislature staff. Sometimes Hehr would be “spouting off” in ways that concerned the leader. “I don’t think he ever did anything illegal, but he was certainly pushing the boundaries with staff,” Swann recalled for a 2016 Maclean’s profile of Hehr, shortly after his cabinet appointment.

“I was concerned at one time it might get out of hand, but then he met a couple of women in his life that I think helped him get back to get some of the balance. And he has matured.” Swann declined comment Thursday.

Hehr began a long-term relationship a Calgary woman a few years ago, long after the alleged encounters with Raworth.

FILED UNDER: Justin Trudeau kent hehr Me too