Why Liberals want to change how MPs work in Ottawa 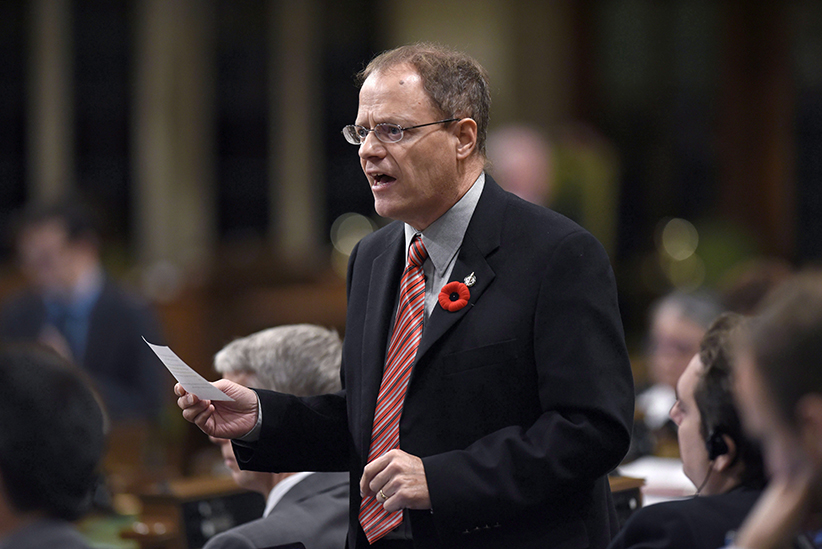 Parliamentary Secretary to the Leader of the Government in the House of Commons Kevin Lamoureux responds during Question Period on Parliament Hill, Friday, Oct. 28, 2016 in Ottawa. (Justin Tang/CP )

The Liberals and the opposition parties are locked in bitter conflict over what sounds, from its flat title, like an innocuous enough discussion paper: “Modernization of the Standing Orders of the House of Commons.” At stake, though, is how MPs do their jobs, everywhere from the spotlight of question period, to the scarcely noticed toil of House committees.

Liberal MP Kevin Lamoureux of Winnipeg is taking the lead when it comes to defending the government’s proposals, in his role as parliamentary secretary to Government House Leader Bardish Chagger. Lamoureux spoke to our Maclean’s on the Hill  podcast last Friday, and this transcript of the interview has been edited for length and clarity.

Listen to Kevin Lamoureux make his case for reform

Q: What are you setting out to achieve with this discussion paper?

A: I’ve been a parliamentarian for over 25 years, most of those years actually in opposition. This reform I believe is necessary because Parliament Hill is so outdated and we do need to modernize the Parliament. We can all benefit.

Q: Can we focus on two or three specific proposals? Why would it be a good thing for the House not to sit on Fridays? Seems like MPs would be working one day less a week.

A: I always say that whether it’s Ottawa or Winnipeg, I work seven days a week. If you take a look at the Fridays we actually sit, those are like half days. We could shift those three hours and start working at 9 a.m. on a Thursday or a Tuesday. By doing that, we’re putting in just as much time. But if my constituents had a choice where I could be at a Friday event in my riding, or spend that half day in Ottawa, my best guess is it’s probably better for me to serve my constituents if I could be in my riding.

Q: So it would be a good thing to let MPs, especially those who live far from Ottawa, have a chance to get home. Let’s talk about the prime minister’s question day idea. You’re proposing something like the British model, setting aside a special day for the PM to answer questions. What do you say to critics who argue, no, it’s better for the prime minister to be in the hot seat as many days of the week as possible?

A: The only ones that are suggesting that are the Conservatives and the New Democrats—

Q: Suggesting that he would only be there once a week?

A: Yes. There’s not one Liberal, including [the Prime Minister] himself, saying that he’s only going to be there once a week. Having a prime minister’s question period, I would think, would be appealing. I know in the years in which I was sitting on the opposition benches, I would have liked to have been the 15th question up, and been able to ask a question of the prime minister. From my perspective, this is a wonderful opportunity for us to really modernize the Parliament of Canada.

OPINION: Canada’s House of Commons doesn’t need to be modernized

Q: Most Canadians see question period now and then. Few pay attention to committee work. You have a proposal for limiting interventions in committee, the kind that slow a bill’s progress, sometimes amounting to a filibuster, which registers opposition to something that a government, especially a majority government, is trying to push through. Isn’t that sort of delaying tactic a legitimate part of the process?

A: One of the nice things about being a parliamentarian for as many years as I have been, is that I have seen rule changes related to committees. And when I think of committees, going forward, in many ways [they are] going to be a backbone for many MPs, in terms of getting engaged on important issues. You know, there are already [rules] in place regarding times.

I really want to go back to the fact that what we want to do is recognize that we have this discussion paper. If [the opposition parties] have concerns, let’s talk about those concerns. I welcome the concerns. I’d like to hear some expert witnesses reflecting on some of the ideas that the Government House Leader has put down on paper for us to be talking about.

Q: The discussion you’re talking about is going to take place over about two months at a House committee, which will then report back to the House in June. Why not just end some of the tension right now by saying that, whatever the committee decides, the government won’t push through reforms without substantial opposition support?

A: I think that it’s important to recognize that we are committed to modernizing the House. We hope that there will be a full engagement with regards to opposition members talking about the ideas within the discussion paper.

But, you know, there is a commitment that was that was made to Canadians [in the 2015 election campaign]. It’s time that we actually do modernize the House of Commons. At the end of the day, I believe that we are going to have better, more modern, parliamentary standing orders, and that’s all I want to be able to achieve. I’m grateful that we have a Prime Minister that is committed to supporting that.

Q: Can I ask if you would agree with something? It seems to me that two legitimate values are coming into conflict here. One is that we value politicians fulfilling their election promises; you Liberals campaigned on this, and now you want to make good on those promises. But we also value a tradition that changes to the core institutions of our democracy—the way we elect the MPs, the ways MP is exercise their rights and privileges on the Hill—those changes are subject to a standard of consensus that requires some agreement across party lines. Do you agree that these two values are coming into conflict here?

A: I think the bigger obligation, for the government that made the commitment to modernize Parliament, is that we move forward on that. I’m an optimistic person. Hopefully we will get people that want to talk about those ideas and get engaged in that discussion. Let’s hear what some of these experts have to say, look at some of the other jurisdictions. I would love to see this all take place, but it needs to be done in a timely fashion.