Why Mike Duffy is facing charges, and Nigel Wright isn't

Jonathon Gatehouse explains how it might be a criminal act to take that $90,000 cheque — but not to write it 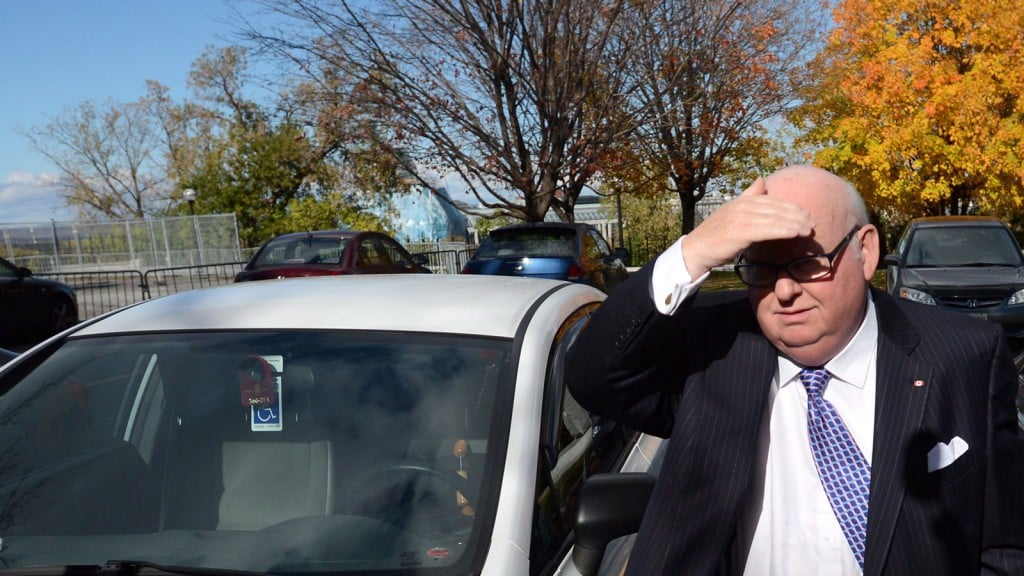 Mike Duffy had cast himself as a pawn in a ‘monstrous fraud.’ The RCMP charged the disgraced senator today with 31 counts related to travel expenses and arrangements.

It is truly better to give, than receive.

At least, that’s the inescapable conclusion to be drawn from the RCMP’s decision to lay criminal breach of trust, bribery and fraud charges against suspended senator Mike Duffy, but to steer clear of the people in the Prime Minister’s Office who facilitated or signed off on a plan to have him “repay” $90,000 in questionable living expenses. The 63-year-old broadcaster-turned-politician now faces a total of 31 counts with regard to his past travel claims, outside consulting contracts, and housing arrangements. But five of the most serious are directly related to the five-figure personal cheque that Nigel Wright, Stephen Harper’s former chief of staff, wrote him in February 2013, enabling the star Tory fundraiser’s efforts to extract himself from a mushrooming scandal.

At first, Duffy, who represents P.E.I., claimed he was using his own money to “voluntarily” repay out-of-town living allowances he had received for his primary residence in Ottawa. Later—months after it was revealed that it wasn’t his cash and Wright was pushed out of his job—Duffy cast himself as merely a pawn in a “monstrous fraud … the PMO’s creation from start to finish.”

The RCMP probed those allegations, investigating Wright for bribery, fraud and breach of trust, but last April announced that the former chief of staff would not face charges. In a statement from his lawyer, Wright said his intention had always been “to secure the repayment of taxpayer funds.”

That hasn’t stopped opposition politicians, the wider public, and even Duffy’s own lawyer from asking how it could be a criminal act to take that $90,000 cheque, but not to write it.

“I am sure that I am not the only Canadian who will now wonder openly, how what was not a crime or bribe when Nigel Wright paid it on his own initiative, became, however mysteriously, a crime or bribe when received by Sen. Duffy,” Donald Bayne, his legal counsel, wrote in a media statement. “There is much that is offensive here. But the evidence will show that it did not emanate from Sen. Duffy.”

The RCMP today declined to take questions on that, or any other aspect of their investigation into Duffy’s dealings. But Sections 119 and 121 of the Criminal Code of Canada, which outline the charges of bribing a judicial officer and frauds on the government that he now faces with regard to that payment, make it an offence to accept, give or even offer funds in exchange for a benefit, reward, or the exercise of influence.

NDP MP Charlie Angus, the official Opposition’s critic for ethics, says both the charges and the RCMP’s silence raise questions. “Bribery is about a quid pro quo,” he told Maclean’s. “How could it be that Duffy is the only one to benefit from this?”

For months now, Angus has been exchanging letters with RCMP commissioner Bob Paulson, trying to establish why the force was pursuing charges under the Criminal Code, rather than the more obscure, but far broader Parliament of Canada Act, which makes it illegal to give money to a senator, or for a senator to take it, regardless of intent. He has also been seeking clarification on why the Mounties apparently avoided consulting with the director of public prosecutions about the matter. “The question is, when they decided not to charge Nigel Wright, who gave them that advice?” Angus asks.

There is open speculation that Wright—who co-operated fully with the police probe into his role in the Duffy affair—will serve as a star witness for the prosecution once the senator’s trial finally begins, likely sometime next year. That has led some observers to conclude that he struck a deal. (After publication of this article, Wright’s lawyer Peter Mantas contacted Maclean’s to refute that speculation. No deal has been cut with the Crown or the RCMP, he said. Although Wright has indeed been told to be prepared to take the stand. The former chief of staff continues to decline all interview requests.)

It may well just be exactly as the RCMP explained it back in April, however. That the evidence they gathered simply didn’t support charges against Wright.

Intent does matter under the Criminal Code. And Wright used his own money, likely knowing he would never see it again, to try and help Duffy out of his jam.

Rob Walsh, the former House of Commons law clerk and counsel, who has been closely following the Duffy file, says it is possible the RCMP are preparing to argue that ill-intent existed on only one side of the transaction. The bribery charge—section 119—hinges on the word “corruptly,” Walsh notes. “It says ‘corruptly gives’ and ‘corruptly gets’. You have to look at the context here.”

Derek Lee, a lawyer and former Liberal MP, says he can envision a scenario in which Wright acted without knowing the full story. “It happens in politics. You get bad advice, you trust the wrong people,” says Lee, who spent 23 years in Ottawa and is now counsel to the Toronto firm Sun & Partners. “As far as I can see, Nigel Wright received no benefit from any of this. In fact, it was a major interruption in a great career.”

A grey area in criminal law, however, isn’t necessarily a grey area in politics. It’s hard to believe that the Conservative party’s interests were entirely absent from Wright’s decision-making process when he cut the cheque. It was, after all, his job to snuff out fires and keep the government’s agenda on track. By all accounts, he was particularly good at it.

It October 2015, Canadian voters are scheduled to go the polls and render their judgment on Stephen Harper and his government. Duffy will surely have had his day in court by then. Perhaps he still possesses more influence than he knows.