Why military funding in Canada is in such a lousy state

Successive governments haven't followed through on spending promises. Is there any reason this government should expect to behave differently? 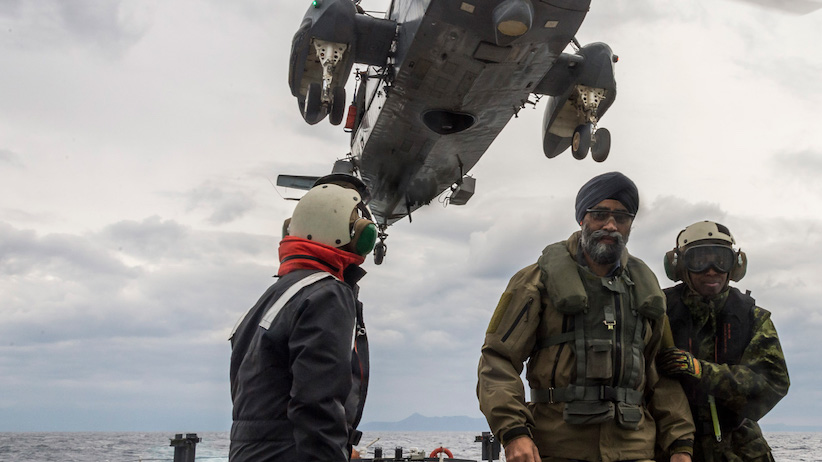 “Read @HarjitSajjan speech about the lack of proper funding 4 the Canadian Forces by the previous Government,” Mike Maka, a staffer at the Prime Minister’s Office, tweeted Thursday morning. Kate Purchase, the PM’s communications director, retweeted the message. This might be a good week to pay attention to the defence minister’s precise words, and that’s not what his speech said.

In fact, Harjit Sajjan was careful in his Wednesday speech to the Conference of Defence Associations Institute to note that “successive governments” — the word is bold, underlined and in italics in his speaking notes — “contributed to the current state of affairs.”

That state of affairs is lousy—”in some ways, worse than realized by most observers”—and Sajjan is careful to refer to governments in plural, and to timelines going back before 2006, as he diagnoses the problem. “Canada’s naval capabilities are at a 40-year low.” “In over 25 years as a Reservist, I saw firsthand the ways that Canada’s government [singular, sic] have [plural, sic] failed to properly equip our Reserve force.”

My point here is not to exculpate the Harper government. Almost the opposite: Stephen Harper, whose political brand was a lot closer to the Armed Forces than Justin Trudeau’s, once planned to reverse the long-term trend of status-quo defence spending against mounting operational challenges. His preferred instrument was the Canada First Defence Strategy, an ambitious plan laid out in 2008, with 20-year spending provisions and specific procurement objectives, for building up a strong Canadian military.

The Harper government came nowhere close to fulfilling its plan. It’s important to note that it wasn’t the first government to sour on defence spending, but Harper was unusual in that he eventually walked away from his own long-term plan. And it’s also important to ask why this government should expect to behave any differently over the long term.

Sajjan’s speech was a prelude to the release of his own new defence policy, which he says the Trudeau government will be releasing “very soon.” A reasonable bet would be before the prime minister leaves for the NATO summit at the end of this month.  Some of the early coverage of his speech noted that it was long on diagnosis and short on solutions. But you can be sure Sajjan has solutions in mind. A speech like this, delivered this close to the release of a new policy, would have been written with every detail of that policy in mind.

So what’s it say? Well, as Sheriff Ed Tom Bell likes to say, if it ain’t a mess, it’ll do ’til a mess gets here. The 65 fighter jets the Conservatives wanted to buy? “Sixty-five jets would simply not be enough” to meet NATO and NORAD commitments simultaneously. And the $9 billion the Conservatives earmarked to pay for jets? “Nowhere near enough to even cover the 65 jets they proposed.” I take this as a pretty clear hint that they will need more than 65 jets, at a cost greater than ($9 billion / 65 = $138 million) per jet.

Navy ships? “The budget identified was dramatically insufficient and unrealistic.” (We pause here to note that Trudeau ran for office on a promise to use the “savings” from fighter-jet purchases to fund naval procurement. Sajjan has given that promise a proper burial.) The fleet is “without a single destroyer…without a single supply ship.” On land, “closing recruitment offices” and “cutting the number of procurement officers” mean that “status quo spending on defence will not even maintain a status quo of capabilities.” Cormorant helicopters need upgrades, Griffon helicopters need life-extending retrofits, ground-based munitions “are required to guarantee the safety of our deployed troops,” a fleet of forklifts and loaders “needs to be replaced,” and on and on.

This all sounds plausible. I’ve argued that the two per cent of GDP “target” for NATO members is aspirational and not worth meeting just for the sake of meeting it, but Canada is at the low end of large NATO member countries by this measure, and the other countries aren’t spending more than us just for fun: a large and flexible military of the kind Trudeau must want if he is to deploy troops to Iraq, Ukraine and Africa simultaneously costs money.

The rest of Sajjan’s speech confirms the hunch that real planning on a spending framework is well advanced. “This Canadian defence policy will be the most rigorously costed one ever produced,” he told his lunch audience. He hired Deloitte and “five other major accounting firms” to fine-tune the costing. It will resist the temptation of “hoping that 20 years down the line, all of the disjointed ups and downs” of year-by-year planning “will somehow result in the military we need.”

Now, all of this is hard to square with the budget Sajjan’s colleague Bill Morneau just delivered, in which very little was added to five-year spending tracks that Morneau laid out in his first budget a year earlier. Federal officials protested that they have no fiscal room to get fancy for years to come.

The only way to square that circle, I’m convinced, is to produce a spending plan that ramps up slowly over a very large number of years — and probably begins with not much spending at all.

One example: The ground-based munitions that Sajjan called a necessity to defend deployed troops are already built into the department’s plans. A 2015 document on the department’s website calls for a contract to be awarded in 2022. The fancy new kit wouldn’t be delivered until 2025, after the election after the next federal election.

There’s no reason to doubt the government’s good faith here. It would be silly of Sajjan to pretend he could magically order up the equipment for a 21st-century military for delivery next week from Amazon. But for the duration of any long-term procurement plan, a very large number of billions of dollars would be available and roped off for the sole purpose of military procurement. Elected leaders are normally inclined to view military spending as always important but never urgent — that’s why the military is in the state Sajjan describes. It’s asking a lot of any Canadian government, whether it be Trudeau’s or someone else’s, to keep from breaking that glass in the event of an emergency. Stephen Harper couldn’t resist the temptation. Can anyone?