Why the PM won't meet the premiers

They want to do more together. He wants to do less. 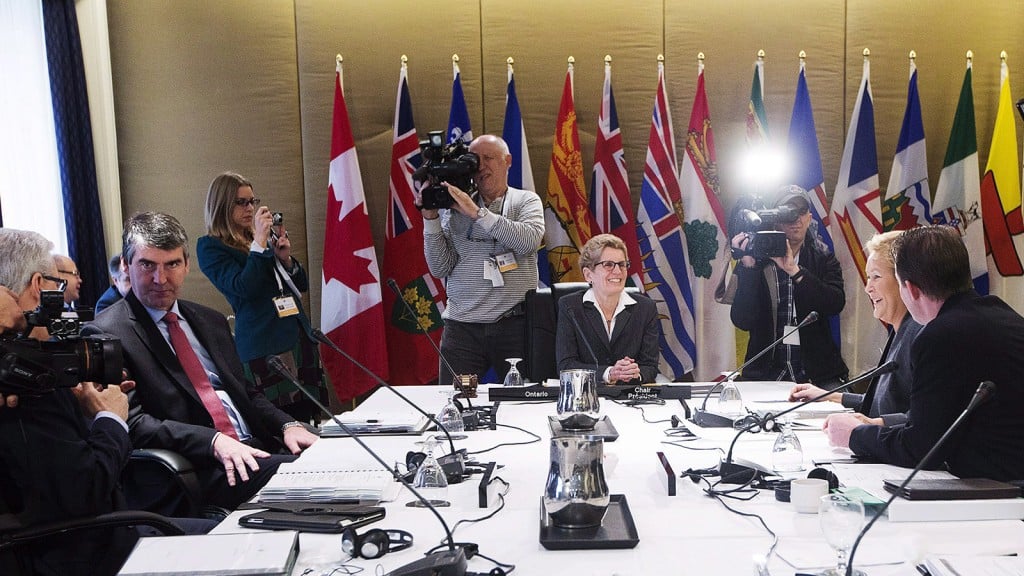 Regular first ministers’ meetings are a Conservative invention. The adjective is important. The first prime minister to call the provincial premiers to Ottawa was Wilfrid Laurier, a Liberal, in 1906. But he only did it once, perhaps because he had the gang in town for six full days, enough to try any man’s patience.

It was 12 more years before any government, in this case, Robert Borden’s, gathered up its courage to bring the premiers back. I say Borden’s “government” convened the premiers, because Borden wasn’t there to meet them. It was November 1918, only a week after the Armistice, and Borden was in London preparing for the Paris Peace Conference. His finance minister, William Thomas White, welcomed the premiers. Together, they puzzled over how to resettle returning veterans from the Great War.

Nine years passed. William Lyon Mackenzie King met the premiers in 1927 to discuss the economy—which promptly collapsed, in 1929. It fell to R.B. Bennett, elected in 1930, to innovate by making first ministers’ meetings a regular event. He played host to the premiers in 1931, 1932, 1933 and 1934. The provinces didn’t have revenues sufficient to the challenges of the Great Depression. Bennett hoped to trade higher transfer payments for a direct federal role in the economy. The premiers shut him down, again and again.

But the model for closer collaboration between federal and provincial governments, both grown more ambitious in the face of new challenges, was set. Back in office, King had four conferences with the premiers in 11 years. Louis St. Laurent had six in six years, Lester Pearson nine in five years. After that came Pierre Trudeau, Brian Mulroney and the deluge: the two men met the premiers 37 times between them.

This stroll down memory lane has been brought to you by the fact that Prime Minister Stephen Harper hasn’t met the premiers together as a group since they gathered in Ottawa to discuss the economic crisis in early 2009. That’s six years ago.

It’s the longest gap between first ministers’ meetings in 97 years.

My undergraduate degree is in political science, and I spent much of those years studying “executive federalism,” which was the practice of first ministers getting together to decide how things were going to work in this country. I’m not sure what political science undergrads study these days, now there is no more executive federalism. Perhaps March Break now lasts a month and a half. Woot!

These days, the premiers are troubadours who wander the country looking wistfully into the middle distance, as if trying to remember something half-forgotten. On Jan. 30, they will be in Ottawa for the semi-annual meeting of the Council of the Federation, the formal name for “premiers without the PM.” The choice of Ottawa for a venue is piquant. The premiers will be in Harper’s neighbourhood, as if hoping he might drop by. Rapunzel, let down your golden hair. No locks, we feel safe to predict, will be forthcoming.

Kathleen Wynne, Ontario’s premier, was in Ottawa last week and we chatted about the upcoming premiers’ meeting. (Premier Jim Prentice, from Alberta, won’t be attending. He’s stuck at home, working on the province’s budget, which, for assorted reasons, will be a humdinger. The rest are scheduled to attend.) Wynne and Harper have set up a cordially antagonistic relationship that I find oddly fascinating.

It’s an election year. If Harper won’t show up, will the premiers meet NDP Leader Tom Mulcair or Liberal Leader Justin Trudeau? Wynne surprised me: “You know what? I think it would be better for all of them to come, or none of them to come, quite frankly,” she said. And, if any party leader comes, it should be the one who heads Canada’s federal government today. “I would be fine if the Prime Minister came and the rest [of the national party leaders] didn’t, because I always think it would be a good thing for the Prime Minister to come and sit down with us.”

I offered my best guess about why Harper won’t meet the premiers: because they are full of ideas for what more governments can do together, and he doesn’t want to do more. He wants to do less. He wants to incrementally reduce the activity of the federal government. The provinces, with all their ideas for infrastructure spending, would simply mess up his game.

“But the more you put off the conversation, the more the pressure builds for that kind of demand,” she said. One reason she meets “regularly” with mayors (a rule she suspended for several months when Toronto’s mayor was Rob Ford) is so “there isn’t the opportunity for a huge demand or ask to build.” So Harper’s majestic isolation is “not only an error [for] the well-being of the country, I think it’s a tactical error, quite frankly.”

History, and a few more federal and provincial elections, will judge Wynne’s standing as a purveyor of tactical advice to Harper. On the pertinence of a meeting right now, she reminded me that the economy has reached a rickety pass, much as it had at the end of 2008, the only other time Harper consented to meet his provincial colleagues. “Given the fact that we’ve got oil falling [and] we’ve got a low dollar, we’re at a point in this country where we’re going to have to make some decisions about what our future’s going to look like. And I think we’ve got the imagination and the courage to do it, but we do have to do it together.”

That is, of course, her opinion. The Prime Minister has another view—and not for the first time.