Why Stephen Harper is mum on coalitions 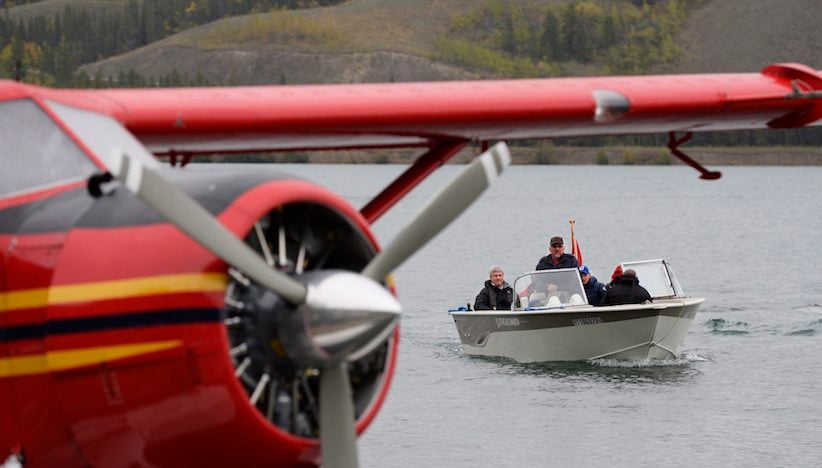 Conservative leader Stephen Harper and wife Laureen arrive at a float plane dock on Schwatka Lake, near Whitehorse, Y.T., after a boat ride on Friday, September 4, 2015. THE CANADIAN PRESS/Adrian Wyld

There’s something Stephen Harper hasn’t been saying on the campaign trail, and on Friday I decided to ask him about it.

My three days on the Harper tour, now concluded, were a period of relative plenty. In three days I asked the PM a question every day, because my employers paid the high daily rate for inclusion on the media tour, and with every campaign event now webcast live, few other news organizations have bothered.

On Friday I asked why Harper hasn’t been saying something in this campaign that he said at every stop, at some length, in the 2011 campaign. In fact the 2011 campaign was to a very great extent designed to put a single choice to voters. They could have a Conservative majority government, he said again and again back then, or they could have a coalition government built by the Liberals, the NDP and the Bloc Québécois.

Here’s how he put it in St. John’s in the campaign’s first week in 2011. “There won’t be a Conservative minority government after this election. There will either be Mr. Ignatieff, put in power by the NDP and the Bloc Québécois, or there will be what Canada needs — a strong, stable, national majority Conservative government.”

In other venues he explained why this was the case. The 2008 coalition assembled around Stéphane Dion had collapsed in part because the opposition had already participated in two confidence votes over the Throne Speech. The Liberals had taken care not to vote against the Harper government, so it was able to continue. That meant that when the coalition did assemble, the Governor General was able to do what governors general normally do: take the advice of the guy who was obviously the prime minister, Harper.

Next time, Harper said (back then), the opposition would not wait and blow its chance. It would organize at the very first opportunity to deny Harper the confidence of the Commons. The whole thing would be settled within days, and if Harper did not have the horses he could not win. Simple as that.

Every poll in this campaign has shown that no party should expect to command a majority in the Commons. So why is Harper not saying the same thing now? Does he still believe there cannot be a Conservative minority government?

“As you know the NDP have continued to promote the idea of a coalition of anyone. Not just the Liberals and them but the separatists and anyone else. That’s been their idea for a long time. It’s one reason I don’t think you can trust NDP ideology with the governance of this country.

“The Liberals have been more equivocal. So I don’t know the answer to that. What I would say is very simple. We have been one of the most stable countries coming out of the shadow of the global financial crisis. Part of the reason we have been one of the most stable economies is not just [that] we’ve been pursuing good economic policy but because we’ve had a stable political situation. I don’t think Canadians should take the risk of falling into the hands of an unworkable coalition nobody voted for. So I don’t know whether that’s the choice, but I know that the only choice that leaves us moving forward is a strong, stable, national Conservative majority government.”

At this familiar refrain, the audience burst into happy applause. But there was nostalgia in the air because Harper has not called for a Conservative majority since 2011.

The reason is obvious even if he did not acknowledge it. In 2011, warning against the coalition was an important motor in the drive to secure a majority. Harper saw in the polls during the 2008 coalition crisis that support for Conservatives roared to heights he’d never seen it attain, well over 40 per cent in many polls after he had fallen nearly 10 points short of that score in the election. A good many undecided voters — not all or even most, but a robust slice of the electorate who could consider voting for any party — thought Dion was a train wreck, that co-operating with the NDP made the whole thing more ungainly, and that needing the support of the Bloc made it worse still. By about 2010, after a brief honeymoon, they decided Ignatieff was at least as bad as Dion.

What’s more, they had never seen a Conservative majority, and Harper was careful to couch it in the most beguiling terms — strong, not vacillating; stable, not nutty; national, not beholden to one region. “A majority in a box,” one Conservative campaign staffer told me later.

None of this is true now. First, the Bloc won’t be propping anything up. Second, the leader of a non-Conservative government may not be the Liberal, it could be Tom Mulcair, who is unexciting in this campaign precisely because he’s trying to look as though he’s already been the prime minister for a few years. And even Justin Trudeau, perhaps astonishingly, has weathered two years of Conservative ad barrages with his voter credibility worn but not shattered.

Then there’s the other half of the equation. Voters have seen a Conservative majority. They know that, being human, it was not always strong, not consistently stable, and that it had no more success pleasing every part of the country than governments ever do.

Harper drove to majority support by promising an ideal and brandishing a menace. The number of voters persuaded by either the carrot or the stick has declined. So he’s dropped the whole pitch.

That doesn’t mean he was wrong in 2011, however. Can a Conservative minority government exist, in a Parliament where Liberals and New Demorats outnumber Harper and his colleagues? We may yet find out.