Why Stephen Harper wants you to know that he's not perfect

New polls and new humility in the Harper campaign 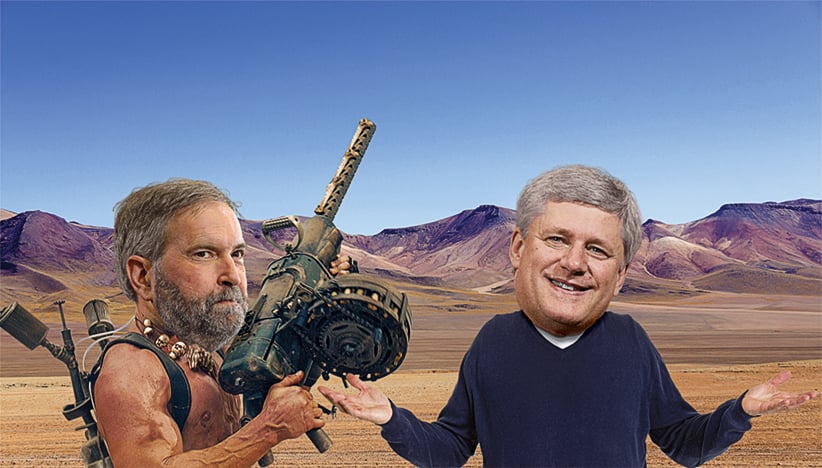 Things aren’t going so great for Stephen Harper. His early campaign call has backfired. The Syrian refugee crisis has made him seem hard-hearted. And his party has slipped to third in the polls. To hear it from pundits, the Conservative campaign is an empty coffee mug and the electorate has just shown up to fix the dishwasher.

To make things more frustrating, the talking points that used to work so reliably—“Proven leadership . . . stable majority . . . my opponents are big-time turd nuggets” (some of these examples may be paraphrased)—are falling flat this time around.

Harper is not deterred, though. He keeps stepping up the rhetoric. We are a week away from the Conservative leader declaring: “Under the NDP, Canada will return to a barter economy in which wide swaths of the country are enslaved to a Mad Max-style villain whose henchmen will ration our water supply and play loud rock guitar on the hoods of our automobiles. Vote Harper for a strong economy and stirring piano ballads!”

Related reading: The NDP is in the lead.  Yes, that NDP.

Even his party’s negative advertising isn’t having the usual effect. Barely halfway through the campaign, it has become impossible to view a Conservative TV commercial without wondering: Are there any Harper supporters who can act? Watching these people deliver a line of dialogue is like watching a possum use a calculator. Or perhaps there are data to suggest a message will land better if delivered by graduates of the William Shatner School of Acting Natural.

Thespian atrocities aside, the party’s latest ad takes an unusual tack: It features a woman who says, “Stephen Harper isn’t perfect, but when it comes to the economy, we can depend on him.” It is pleasing to imagine the hurdles that must have been overcome to make this ad a reality.

Jenni: Hey, I’ve got an idea to shake things up. Why don’t we admit the PM isn’t perfect?

Kory: I love it. It’ll humanize him!

Jenni: So we’re agreed; we’ll make an ad saying Stephen Harper is not perfect. [Pause] You go tell him.

Kory: Uh, it was your idea. You tell him.

Jenni: [Closes eyes and prays for the sweet relief of spontaneous combustion.]

But here’s the thing: Harper is so desperate, he said yes to the ad—and he agreed to reinforce the message in his campaign appearances. In a CBC interview this week, he said: “I’m not perfect, but, you know, I’m dedicated to my country, I love my country.”

Did you catch the subtle undertones there? Ladies and gentlemen, we are now entering the phase of the campaign where Harper plays the humble, hangdog politician. GEE, I WEALLY TWY TO BE A GOOD WEADER AND I SURE DO WUV MY COUNTWY! [Kicks dirt with toe of shoe.]

Right now, the Conservatives have the feel of a government in its death throes. But Harper has won three elections. Why wouldn’t he be confident he can do it again? The PM surely believes the tide will turn, once Canadians tune in to his message: that only he can be trusted to manage the economy, make tough foreign policy choices, and confer a boutique tax credit on everyone who feels meh about apples.

The other leaders certainly have their vulnerabilities—front-runner Tom Mulcair, in particular. He continues to vow a deficit-free NDP government. But he keeps adding to his list of commitments. Tom will reverse the planned cuts to Canada Post service, create a national daycare program, spend more on health care—and don’t worry, everyone: The budget will still be in balance. We just need oil to hit $28,000 a barrel and everyone in Saskatchewan to inherit a fortune from an eccentric aunt.

Related reading: Attn. leaders: It’s in your interest to step it up

Maybe not every single attribute, Prime Minister. Maybe, after 10 years, they just miss seeing the ones you don’t have.

Scott Feschuk is a columnist for Maclean’s and Sportsnet magazines. He served as Liberal Prime Minister Paul Martin’s speech writer and currently writes speeches for business leaders and politicians of varied political stripes. A three-time winner of the Gold award for Humour at the National Magazine Awards, he is the author most recently of The Future and Why We Should Avoid It (Douglas & McIntyre).