Why the ethics commissioner did wrong by Nigel Wright 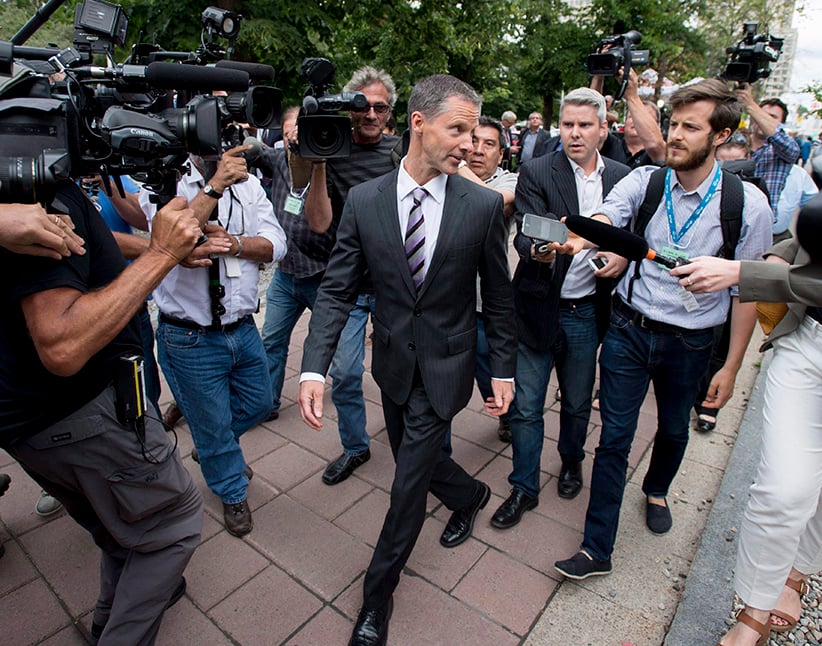 Nigel Wright, former Chief of Staff to Prime Minister Stephen Harper, leaves the courthouse in Ottawa after his first day of testimony in the trial of former Conservative Senator Mike Duffy on Wednesday, Aug. 12, 2015. Duffy is facing 31 charges of fraud, breach of trust, bribery, frauds on the government related to inappropriate Senate expenses. (Justin Tang/CP)

The practice of issues management in government doesn’t afford the luxury of do-overs. But if the previous Conservative government could relive one day in its majority mandate, it would be Dec. 3, 2012.

What happened that day? A sticky mess named Mike Duffy found himself stuck to the bottom of the government’s shoe following a media report detailing his outsized living expenses.

To this day, Duffy remains a burden on the (now former) government’s sole, hardened and darkened from numerous trips to the pavement, but still able to impede those who tried to scrape him off, including my friend and former boss, Nigel Wright.

On Thursday, conflict of interest and ethics commissioner Mary Dawson finally ruled on Wright with respect to all matters Duffy. The commissioner found that Wright contravened subsection 6(1) and section 9 of the Conflict of Interest Act. Google that if you care to know the particulars.

Essentially, the commissioner ruled that using your personal money to make the government whole because a senator with a sense of entitlement and a matching persecution complex wouldn’t do the right thing and repay his expenses is a “contravention” of the Act. It “furthered” Duffy’s “private” interests, you see. And Wright should have known that resolving the situation in this matter would place him in a conflict of interest.

Try explaining that one to your friends from less robust democracies: “You mean he gave the government money? His money?”

To be sure, the whole Duffy affair was grotty business, but that’s often politics for you. With Duffy, there was no palatable option. It was either lose a star performer in Red Chamber, or wear him as a scarlet letter for the Senate’s loose and abused expense and residency policies. The government hoped to avoid the former by ending the senator’s gluttony on the latter.

LONGREAD: The revenge of Mike Duffy

The commissioner unquestionably had one thing right on Wright: by backing the senator on the question of his primary residence being in Prince Edward Island (where the Senate requirements were usefully vague), the government also legitimized swathes of Duffy’s “secondary” expenses in Ottawa. It made them “okay” to claim even they weren’t, to most casual observers.

This “most” included the Conservative base, which explains why Stephen Harper’s Prime Minister’s Office was so seized with the issue. The Liberals were the entitled fat cats claiming packs of gum, not Harper’s Conservatives. Duffy—and eventually others in the Senate—put paid to that lie.

Most politicians granted such a stout backing in the midst of scandal would have repaid the expenses, quietly decamped to Prince Edward Island full(er) time, shuttered their Ottawa home, and gone on to collect their Senate pay until the age of 75.

Unfortunately, the “ol’ Duff” wasn’t most politicians. And the second the government stuck its neck out to defend Duffy on the existential question of residency, the senator had the government by the short hairs on matters closer to his famously unreliable heart: money.

By the time Duffy’s questionable expense bill had rocketed from $30,000 to $90,000, and the party got cold feet about assisting the repayment, the senator had already gone out publicly to admit he would pay the money back.

Cue more whining from the senator, and enter Wright, who felt he had to honour the commitment to make Duffy whole so the senator could, in turn, make the receiver-general (i.e. the taxpayer) whole.

For those keeping score at home, the only person Nigel Wright was comfortable with being out of pocket was himself. He never claimed government expenses for government travel and even bought me a new pair of running shoes after he’d borrowed mine to go for a run while we were in India. Sure, he’d bled in them a bit, but there simply wasn’t any question of me owning his stain.

The Duffy disaster is so perverse it’s only fitting the man who tried to do the right thing—Wright—is the only one officially sanctioned.

Of course, Duffy had his days in court. Even if he escaped sanction from Justice Vaillancourt, the court of public opinion has hung goat horns on Duffy and the entire Senate. That said, I don’t imagine it’s changed Duffy’s behaviour on expenses or his enjoyment of his taxpayer-funded salary.

“Mike, this looks bad and we think you need to pay this back.”