When it comes to a debate in Quebec, all the party leaders have something to gain—and lose 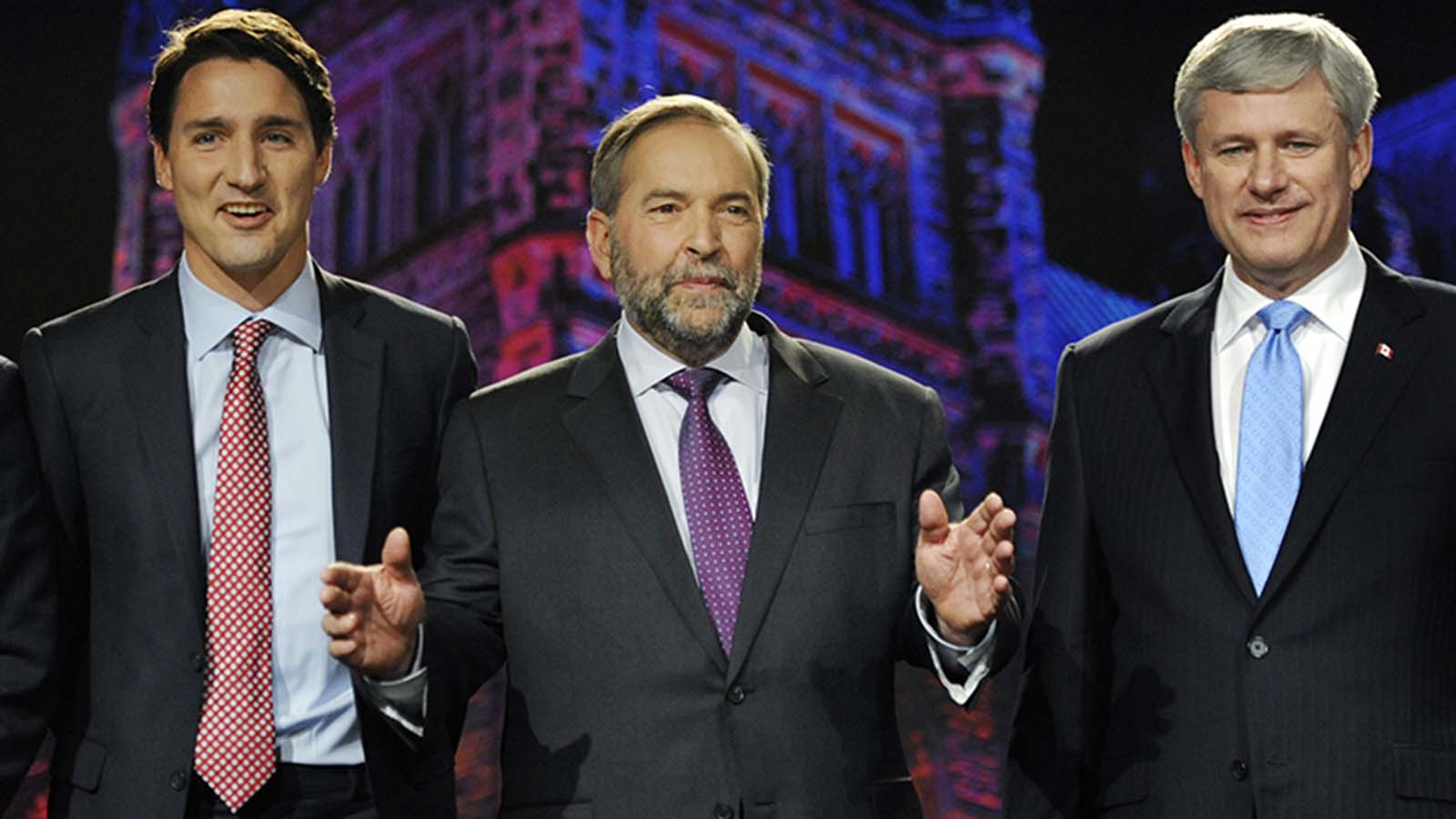 There will be five federal party leaders vying for their share of the spotlight on a crowded stage at Thursday evening’s French-language debate, but the stakes will be highest in any direct clashes between the NDP’s Tom Mulcair and the Liberals’ Justin Trudeau.

Mulcair goes into the televised debate, which is being staged in Radio-Canada’s Montréal studios, in what looks like a dominant position in Quebec. Last week, the polling firm Ipsos Reid pegged NDP support in Quebec at 37 per cent, a seemingly comfortable 14 percentage points ahead of Trudeau’s Liberals, 15 points in front of Gilles Duceppe’s Bloc Québécois, and 24 better than Stephen Harper’s trailing Conservatives.

Yet some observers suspect a meaningful slice of those Quebecers now telling pollsters that they intend to vote NDP might be open to persuasion. “There is not a deep attachment to the NDP,” says University of Ottawa political science professor Francois Roche, who has studied the party’s “Orange Wave” breakthrough, under the late Jack Layton, in Quebec in the 2011 election. “These are not committed NDP voters. Everything could change very dramatically at the very end of the campaign.”

The Liberals are counting on the NDP vote remaining volatile, even though Mulcair hasn’t shown any sign of weakness in his home province through nearly eight weeks of this marathon 11-week campaign. A senior Liberal strategist said Trudeau’s team regards Thursday’s encounter as potentially the most important debate of the campaign, since it offers Trudeau his first and best chance to grab the attention of Quebec voters who might not have been paying close attention so far.

The strategist argued that the Liberal economic platform should be attractive to Quebec voters, especially its emphasis on deficit-financed infrastructure spending in a province where crumbling bridges and pothole-pocked highways symbolize chronic underinvestment in public works. As well, he said Quebecers should be receptive to Trudeau’s message that too much of any growth in middle-class incomes across Canada in recent decades has relied on rising salaries in the resource-based industries, especially in the West.

Pollster David Coletto of the Ottawa-based firm Abacus Data says a key factor to keep in mind during the debate is that Quebec voters are not only the most likely in Canada to support the NDP, they are also by far the most likely to predict that the NDP will actually form a government. Fully 40 per cent of Quebecers expect the NDP to win on Oct. 19, Coletto says, compared to just 22 per cent in the rest of Canada. “If that expectation begins to fade, and expectations of a Liberal victory rise, NDP support could be vulnerable, especially in Montreal and western Quebec,” he said.

Of course, Mulcair and Trudeau will not be alone on the stage, and the economy is hardly the only subject up for argument. Roche says he expects the Bloc’s Duceppe, who desperately needs to somehow gain ground on the NDP in rural ridings, to press Mulcair hard over the proposed Energy East pipeline, which would run partly through Quebec. Duceppe opposes the pipeline outright, but Mulcair says it should be subjected to a stricter environmental assessment process before Ottawa approves or rejects it. (The pipeline issue might also offer Green Leader Elizabeth May, who will be participating again tomorrow after having been left out of last week’s debate on economic issues, a chance to assert herself.)

More controversially, Duceppe is campaigning hard against the NDP on the polarizing issue of whether a woman should be allowed to wear a face-covering veil, such as the niqab worn by some conservative Muslims, during the Canadian citizenship ceremony. Harper’s Conservatives proposed the ban, which the NDP and Liberals oppose. The Federal Court of Appeal ruled last week that a woman could wear a niqab while swearing the oath, but the legal battle continues. Duceppe has gone so far as to propose invoking the notwithstanding clause in the Charter of Rights and Freedoms, if the courts ultimately rule that banning veils during the ceremony violates fundamental rights.

Another issue that might draw attention away from the core economic platforms is the bitter split between the NDP and Liberals over the Clarity Act. The law, passed by the former Liberal government in 2000, says a “clear majority” in favour of separation in any future referendum would be needed to start negotiations on Quebec leaving Canada. Trudeau staunchly supports the law, but the NDP’s policy is that a bare majority of 50 per cent plus one would be enough for Quebec to go its own way.

The issue sparked one of the hotter exchanges between Mulcair and Trudeau during the Maclean’s National Leaders Debate in early August. It was Harper, though, who arguably scored the most points on the issue, asking with a tone of exasperation why his rivals were debating national unity at a time when separatist forces in Quebec are not a big factor. He quipped that Mulcair’s questioning of the Clarity Act amounted to “trying to throw gasoline on a fire that isn’t even burning.”

That was one of the better lines of the evening, and a reminder that in free-flowing debate, even a leader who seems marginalized can suddenly take command of the moment. If the polls and the electoral map make Mulcair and Trudeau the combatants to watch on Sept. 24, there will be three other leaders on stage with something to say about that. Quebec politics, after all, rarely follows a predictable path.