Why, them's seriously close to fightin' words, them are.

Ignatieff to the PM: “If you mess with me, I will mess with you until I’m done.” 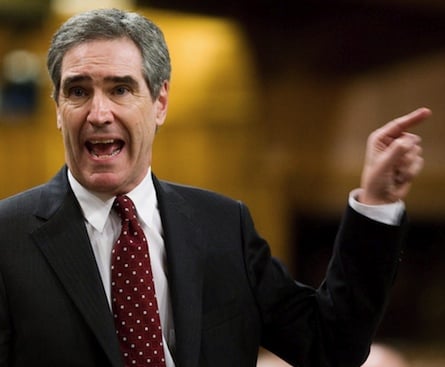 Another name to add to the “don’t mess with” list, right after Doug Finley:

Liberal Leader Michael Ignatieff did not mince words in issuing a warning to Stephen Harper on Saturday night.Ignatieff told the Newfoundland and Labrador Liberal convention in Gander the prime minister must learn: “If you mess with me, I will mess with you until I’m done.” (CP via NNW)

So, what does that actually mean? ITQ has no idea. I mean, yes, of course she’s been following the usual pre-summer break parliamentary sabre-rattling — current pretext du jour: employment insurance reform — and it’s true that there are at least a half dozen or so supply votes that have to be held before the end of the session, any one of which could, in theory, trigger an election. But so far, we haven’t seen the usual followup stories about how very, very serious each and every party is about going to the polls this summer, even if it means spending Canada Day on the hustings.

Have any senior anonymous sources let the word leak out that they’ve rented a plane, for instance? Have any parties put in a rush order for lawn signs? Laid down a three week deadline for candidate nominations? Taken the national media on yet another sightseeing trip to show off the Rube Goldbergian war machine currently operating on powersave mode in the bowels of their sprawling East End compound? (O, Little Shop, I promise that next time, I’ll show up for those 6am briefings, liveblogging berry in hand. ) No, no, no and no.

We do, however, have Colleague Wells’ exclusive report on the Liberals’ “extraordinarily ambitious plan to nearly quintuple the party’s revenues from private donations”, which has apparently been bumped up from a leisurely fall rollout to a June 1st start date, which seems to be a direct response to the “Just Visiting” ad onslaught (adslaught?) currently filling the airwaves courtesy of the Conservative Party.  Even if that’s the case, though, it’s hard to see how that backs the theory that the Liberals are ready to pull the plug on the government within the next month, as that would still leave just 23 days before the Commons closes its doors for the summer, putting the party on a timeline that would seem to go beyond “ambitious” and into “kind of insane”.

And that’s assuming that the other opposition parties would play along with the Liberals when it came time to vote, which, as we’ve been told time and time again, is far from a sure thing, although ITQ is probably a bit more uncertain on that one than most of her colleagues, simply because she thinks the Bloc Quebecois are pretty much always ready for an election, despite the constant tut-tutting from English Canada over its imminent demise, and she’s not sure how the NDP could swallow itself whole and vote with the Conservatives, especially on something like EI, given what a big deal they’ve made over being the real official opposition. The government could, in theory, cut a deal with one of the two, but given the fact that the prime minister has already been muttering darkly about how the apparent opposition unity on EI constitutes a stealth resurrection of the diabolical, power-crazed coalition, that seems like a long shot.

And yet — somehow, it just doesn’t feel like we’re on the verge of an election, or even the verge of an election crisis, vague and unspecified threats from the leader of the opposition notwithstanding. Which leaves us to wonder idly, while waiting for the bells to ring for the last time and the Hill to slip into a peaceful summer slumber, what exactly did Ignatieff mean when he said he’d mess with the PM until he was done? More Youtube videos? More scowling? More crosscountry speechifying about all the perfidies committed against Canadians by this government up with which he will not put, despite the fact that, so far, every time he’s eventually wound up doing just that in the end? Or will the press gallery wind up staking out Rideau Hall some (hopefully) sunny morning this June, every one of us claiming to have seen it coming all along?  ITQ has her SPF 30 sunscreen primed and ready — but she’s not going to start brainstorming new Nanos-related rolling poll headlines just yet.

FILED UNDER: at least they didn't pull this mid-inquiry break out the summer weight sweaters countdown to the anticlimax begins now! election speculation: it's the Hill version of shopping for a prom dress little shop of tories v2.0 Michael Ignatieff Stephen Harper