Why Canada—and its economy—has plenty to fear from Trump

As Donald Trump upends the world order, don't believe for a second that Canada's economy will escape unscathed

That’s the basic message that the head of Donald Trump’s business advisory board, Stephen Schwarzman, presented to the Trudeau cabinet during their Calgary retreat, days before the president opened up his full-blown “Wall War” with Mexico and then followed up with his shattering immigration order banning immigration from some mostly Muslim countries. Set aside—if possible—the fact that the president wants to rip up NAFTA, hire only American workers, punish companies that move outside of the U.S. and generally kickstart an age of protectionism that would make his political antecedent Andrew Jackson blush, but apparently Canada will be the exception. “Canada is very well-positioned for any discussions with the United States,” Schwarzman said, looking so placid and reassuring. “I don’t think [Trudeau] should be enormously worried because Canada is held in very high regard.”

Well, not “enormously worried,” anyway. Should these words reassure the Trudeau government? Lay them over the political mantra that Canada’s ministers and ambassador have repeated since the election—that 35 U.S. states and nine million Americans depend on trade with Canada, that we don’t have a sizable trade deficit with the U.S. or that Canadian workers are not paid less than U.S. workers—and you really start to believe the Trump era will disrupt the whole world … except us. Exceptional Canada.

But as the man himself likes to say: Wrong.

Before you buy the Canadian case for the mutually beneficial status quo, it might be wise to take a closer look at folks like Schwarzman, the CEO of the massively powerful Blackstone Group. He has a net worth of almost US$11 billion. Forbes ranks him the 113th richest man on the planet. In a profile of him published in the Guardian back in 2007, when Schwarzman was known as the “King of Wall Street” and lived in a 35-room Manhattan apartment with 13 washrooms and 11 fireplaces, writer Andrew Clark quoted an interview of Schwarzman describing how he approaches a big negotiation. “I want war, not a series of skirmishes,” Schwarzman said. “I always think about what will kill off the other bidder.”

War. Kill off the other bidder. That’s how you become the King of Wall Street. That’s how you become the chief of the business advisory board for President Donald J. Trump. That’s how you approach a “big negotiation,” like, say, NAFTA. You are a predator atop the financial food chain. To believe that people like Schwarzman or Trump, or Commerce Secretary Wilbur Ross (net worth US$2.5 billion) or Secretary of State Rex Tillerson (the former CEO of ExxonMobil whose net worth is a modest US$150 million), will leave Canada alone, that they will look for a better deal with everyone except their second-largest trading partner, is not just naïve—it’s like jumping into a pool filled with great white sharks because you’ve convinced yourself they’re vegetarians.

Of course, not everyone was convinced by the Schwarzman charm. “We should be really concerned about Trump’s ‘Buy American’ ideas,” the ever-pragmatic Derek Burney told me. Burney was the Canadian ambassador to the U.S. and a key player, alongside Brian Mulroney, in negotiating NAFTA. “My watch word is ‘vigilance.’ Don’t react to the president’s rhetoric, but to pragmatic proposals. And we have not seen those yet. I’m saying, ‘cool it,’ and frankly, that’s what Canada’s ambassador David MacNaughton has been saying recently. He’s right. Let’s get to a table and understand what they are looking for, let’s understand the difference between executive orders and substantive change that might require congressional support on this.”

Burney’s point about a jumpy reaction is critical. In the early weeks of the Trump’s presidency, the world has reacted to Trump’s Twitter feed as much as to his executive orders. “Trump has demonstrated he can get a lot done with bluster and cajoling on Twitter, so why would he need to negotiate?” Burney says. “His pronouncements have everyone off balance—’What’s the next tweet and who is it is aimed at?’ That’s not a negotiating position, that’s a terror tactic. The truth is, the U.S. and Canada are totally integrated and the U.S. will do damage to themselves if they hurt Canada. The protectionist crew in the Trump camp may not get it yet, but American CEOs, governors and Congress get it. The other good news is that with a guy like Rex Tillerson, the new secretary of state, you don’t need to start a meeting with a map. He did so much work here with ExxonMobil. He is like George Shultz was under Reagan. He will be important for Canada.”

MORE: What ‘America First’ might mean for Canada’s economy

That doesn’t mean things will be status quo. The U.S. war of words with Mexico is dangerous, and Burney, among others, is convinced the first thing that Canada has to do is abandon the Three Amigos relationship. “We should not indulge in ridiculous posturing—like getting together with Mexico to defend our interests, when Canada has very different economic interests than Mexico. It is a fundamental error to conflate them.” The NAFTA era as we know it is coming to an end.

There might, in fact, be a totally new arrangement made, what trade lawyer Mark Warner calls “NAFTA +1,” the one being the United Kingdom. “Renegotiating NAFTA is mostly a threat because once it is opened I am not sure it can be limited just to Mexico. We should probably be giving some thought to the NAFTA + 1, the U.K. post-Brexit, or NAFTA without Mexico but including U.K. Article 2204 [of the NAFTA agreement] provides for accessions. We need to prepare for the possibility that the U.S. walks away from NAFTA, and we would have to try to renegotiate a NAFTA minus Mexico under the ‘fast-track’ negotiating authority that Obama got for TPP.”

Warner believes the first big challenge will be determining if Canada is scrapping NAFTA altogether and starting from scratch or just polishing a few key issues. “We need to identify areas where we might make new demands if NAFTA is opened up: services, government procurement, digital economy, business visas, energy. We need to decide whether we fight over proposed changes to Chapter 19 dispute panels or whether we give Trump an easy face-saving win there to save the deal itself. On rules of origin, do we play along with Trump in tightening the rules—unions would love that—or do we recognize that Japanese auto investment is now a huge part of the domestic industry and they might not invest here under those rules?”

Warner is also skeptical that Canada should push hard for a free trade deal with China while trying to work with the Trump administration. I asked Canada’s new ambassador to China, John McCallum, if Canada’s plan to press ahead on more trade with China could have blowback from the Trump government, and he replied that Canada can “walk and chew gum at the same time.”

Maybe. But this ain’t as easy as walking, and trade with China and the U.S. is bigger than bubblegum. “On China, I don’t think the U.S. will look kindly on Canada blessing their state-owned enterprises (as we already seem to be doing re: investment) and I can see that bleeding into NAFTA renegotiation talks,” Warner said. “So I think the Trudeau government is not going to get leverage by pursuing these bilaterals and will have to push them off gently into their next term.” 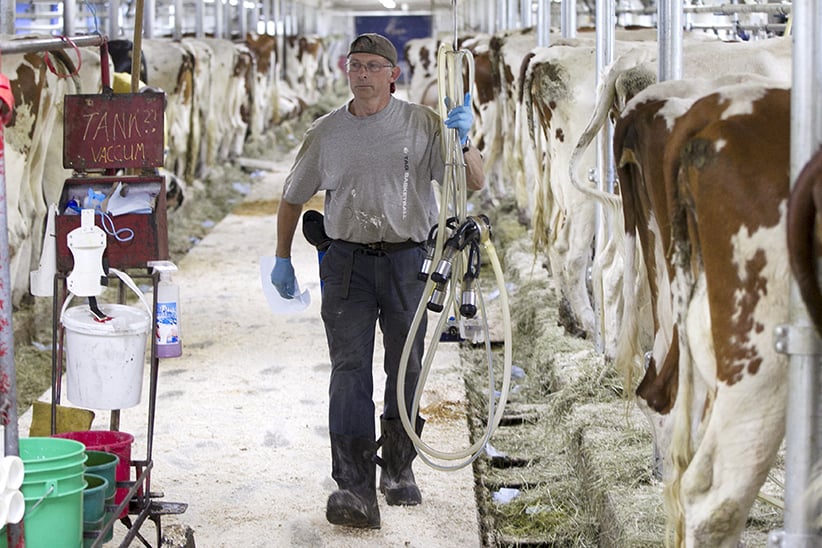 There are other worries as well. Dairy and poultry farmers who function under Canada’s supply-management system are already being targeted by dairy farmers in the U.S. Under Trump, the U.S. will likely want our protections broken down, even as they erect their own. “I expect the U.S. will focus on all the protections and exclusions we obtained in 1993 in NAFTA: dairy, telecom, airlines, energy and procurement,” said Ian Lee, associate professor at the Sprott School of Business in Ottawa. “I cannot see how Trump and ‘America first’ can or will accept that Verizon is denied entry to Canada. And the second-largest population of dairy cows in the U.S., at 1.7 million cows is in Wisconsin, the home state of Speaker Ryan, who strongly supports the Wisconsin dairy farmers. The Trudeau government must ruthlessly decide what must be obtained at all costs from the U.S., such as guaranteed access to the U.S. market or public health care being exempt from challenges versus what are we willing to give up to gain what we want. And only the extremely naïve believe that we will not have to give up anything.”

Depending on what side of the political fence you are on, this is either good or bad. Some, like Lee, want to destroy supply management and open markets, while others, on the left and on the right—political lobbying makes strange bedmates—will fight to keep them.

Best-case scenario? Trump has so many fires to put out—the trade and border issues with Mexico, the immigration ban on seven largely Muslim countries, whatever media war over facts and alternative facts he happens to be in—that he doesn’t have time to burn down the relationship with Canada. But in the first weeks of his presidency it is clear that Trump moves very quickly, often with no apparent planning, and often with no regard for long-term consequence, logic, or strategy.

For Canada, a country betting that rational pragmatism and our exceptional relationship with the U.S. will win the day, that’s an exceptional worry.