Why was Canada's vaccine task force kept secret for most of last summer?

Politics Insider for March 9: Ottawa pulled back on a June plan to announce the vaccine task force days after it got down to work, the Commons votes electronically for the first time and the Kielburgers are summoned 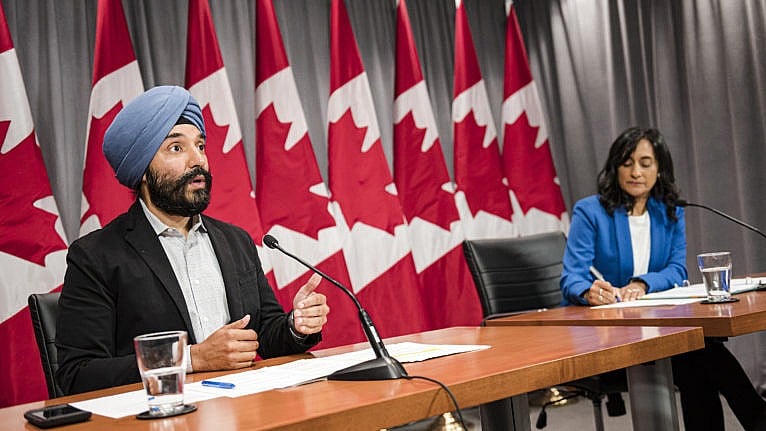 Navdeep Bains, Minister of Innovation, Science and Industry and Anita Anand, Minister of Public Services and Procurement make an announcement regarding vaccine procurement, in Toronto, on Wed., Aug., 5, 2020. (Christopher Katsarov/CP)

The COVID-19 Vaccine Task Force worked in obscurity for much of last summer. The group was established in early June, and furiously worked to assess which domestic and international vaccine candidates Ottawa should pursue. Emails disclosed to the Commons health committee show the feds were planning to announce the task force on June 17. Bureaucrats had even assembled a communications plan with sign-off from senior public servants—and planned media training for anyone who would do interviews. But that announcement never happened.

A briefing note from early last June obtained by Maclean’s via access-to-information even attached biographical notes for every task force member. But it wasn’t until two months later, on Aug. 5, that then-innovation minister Navdeep Bains announced the creation of the VTF. A “special backgrounder” from that date refreshed the government’s talking points and linked the task force to the first announcement of signed deals with Moderna and Pfizer.

John Power, a spokesman for Innovation Minister François-Philippe Champagne, told Maclean’s the pandemic’s early days “necessitated rapid communications decisions, under tight timelines, which were often subject to change.” Power added the feds told the country about the VTF “as soon as we had completed the necessary internal due diligence on the Task Force recommendations and were in a position to announce investment and procurement decisions flowing from the advice of the Vaccine Task Force.” Power wouldn’t say why the VTF’s work needed to be secret until those first deals were signed.

The Liberals have appointed myriad task forces that are public the day they start their work. The most recent example came just yesterday, when Finance Minister Chrystia Freeland marked International Women’s Day by naming a Task Force on Women in the Economy—and publishing its membership and terms of reference. The task force will make recommendations on where to spend stimulus funding, and after the budget will focus on broader equality issues, including the gender wage gap.

The Globe and Mail reported that no federal budget will be tabled until at least April. The latest House calendar shows MPs sitting from April 12 all the way until May 14 before taking a brief spring break, and then sitting well into June.

E-voting, a parliamentary first: Yesterday, the Commons voted on a Bloc Québécois opposition motion on the plight of elderly Quebecers in the pandemic (including increasing Old Age Security payments). That vote marked the debut of the brand new Commons electronic voting system powered by a new app—and there’s even a live results page. MPs are actually allowed to switch their votes at any point during the 10-minute voting window. The Bloc motion, by the way, passed 183-147.

Class action: The Hill Times reports that more than 500 current and former Black public servants have joined a class-action lawsuit that complains of a lack of advancement, harassment and discrimination. Ottawa has enlisted outside counsel in the form of Fasken Martineau DuMoulin. “No schedule has been set for the government to set out its position on the lawsuit,” read a federal statement.

That’s an order: The Commons ethics committee unanimously voted to issue a summons to Craig and Marc Kielburger compelling them to testify after the latest hubbub over WE Charity’s handling of donor money. The brothers eventually said they’d comply. If they’d ignored the summons, the House itself could have issued a legally binding order. Ignoring that order could have found the Kielburgers in contempt of Parliament—and a particularly bizarre alternate timeline would have seen the pair serve time in jail.

Running for office: A small note in the Canada Gazette marks a leave of absence for Greg Dempsey, a senior policy analyst at Global Affairs Canada. Dempsey is running for a provincial nomination—based on his past political work, the Liberals are likely—in the bellwether riding of Peterborough-Kawartha, Ont. We asked the local riding association for confirmation. Dempsey’s resume includes postings to Canada’s UN mission in New York and the embassy in Afghanistan. The Peterborough Examiner crowed about the local boy’s role as a researcher and lead writer of Ralph Goodale’s report on the Flight 752 tragedy. If he scores a party nod, Dempsey would take on PC incumbent Dave Smith in 2022.

Another pandemic ranking: The Macdonald-Laurier Institute published a global COVID Misery Index that pegged Canada at 11th place on a list of 15 peer countries (the top of the list was, perhaps ironically, the least miserable). Canadians scored well—6th place—on disease-related misery, but ranked near the bottom on government response and economic impact.

Down the drain: The feds are paying a firm in Washington, D.C. to renovate the sixth-floor washrooms at Canada’s embassy in the District. The price tag for the job, which will produce a more eco-friendly, higher-efficiency loo, is $170,954. This is not to suggest that is a bad deal. Washrooms need renos. But how could we resist the pun?