Why women's economic equality is lagging under Trudeau

For a government that claims to be feminist, it has barely moved the dial on childcare, pay equity and better jobs for women, says a new report 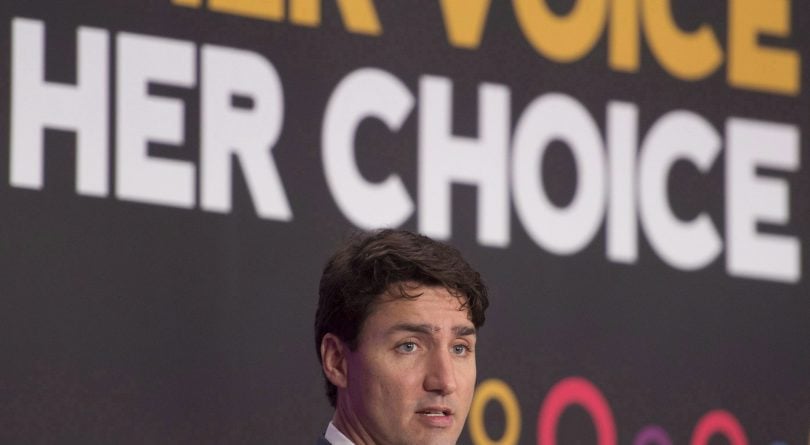 Prime Minister Trudeau is prone to pointing out that his government is a feminist one. And if Canadians were to take his word for it, they might believe the Liberals are fulfilling their campaign promise to achieve gender equality in this country.

But according to a report released today, progress on the feminist file is slow under the Trudeau government.

In the lead-up to International Women’s Day, Oxfam Canada released its second annual feminist scorecard on Wednesday “to assess the government’s progress in turning feminist words into action,” Oxfam said in a press release (the organization’s Great Britain branch has been embroiled in its own women’s rights debacle recently). The report, which tracks the government’s progress on feminist policies and promises since last March, found that the Liberals are fumbling on pay equity, female labour participation and childcare—key areas with potential to move the dial on economic gender parity and finally close the gender wage gap.

“It’s disappointing that the areas that most directly relate to [the Liberals’] platform haven’t seen much progress,” says Diana Sarosi, Policy Manager at Oxfam Canada.

While the government has made progress on women’s representation in leadership roles, championing women’s rights abroad and climate change (which disproportionately impacts women), they’re lagging in, arguably, the most consequential feminist files.

Care work
“It’s time to take a serious look at parental leave and childcare policies,” Trudeau said earlier this year at the World Economic Forum in Davos. “We should be encouraging women, and men, to make the best decision for their family situation.” In practice, the government has done little such incentivizing.

READ MORE: Why do men make more money than women?

Women make up the vast majority of care workers—be it child, elder or special needs care—which tend to be low-paying jobs. “It’s very precarious work and it’s very much dominated by racialized and immigrant women,” says Sarosi. “There hasn’t been an investment for improving the working conditions for them.”

Meanwhile, the lion’s share of unpaid care work also falls to women. In Canada, women spend 50 per cent more time on such unpaid work than men do—time they could potentially spend earning money and building their career. A report by the Canadian Centre for Policy Alternatives shows that, with few exceptions, Canadian cities with the lowest childcare fees also have the highest female workforce participation. This phenomenon is particularly evident in Quebec, the only province with universal childcare, and the only one where progress for women, with regards to wages and labour force participation, hasn’t plateaued.

Last July, the International Monetary Fund released a report prompting Canada to make childcare truly affordable nationwide. Not only would it make life easier for families, the IMF argues, it would boost the economy, too. According to the report, if the government invested $8 billion per year, it could cover 40 per cent of childcare costs for every child in Canada. It calculated that such a subsidy would incentivize about 150,000 educated stay-at-home mothers to enter the labour market, boosting the GDP by 2 percentage points, or about $8 billion per year. Instead, the government earmarked $7 billion spent over 10 years for childcare in the 2017 budget: “a drop in the bucket,” as Sarosi puts it. No additional funding was announced this year.

Parental leave
The government did, however, introduce a five-week use-it-or-lose-it leave incentive for the second parent, claiming to reduce the burden of care, and time off work, for the primary parent (typically the mother). According to Sarah Kaplan, director of the Institute for Gender and the Economy at the Rotman School of Business, such incentives are critical. “They’re important for equalizing the impact of parenthood in the workforce and getting men more involved in the unpaid work of care work.”

But five weeks, Kaplan adds, is little more than a vacation.

“If you want to be charitable, you could say it’s a good start,” she says, “but I would say it’s not going to have the positive knock on effects that we want in terms of changing the dynamics in the workforce and [eliminating] the penalty right now that women are paying for having children.”

The Oxfam scorecard likewise recommends the government extend the leave period for the second parent.

Pay equity
Compared to other feminist issues, the government has made the least progress on pay equity, despite wages for full-time working women languishing at about 74 per cent of men’s in Canada.

The Liberals have announced plans to introduce new legislation to strengthen decades old pay equity laws for federal employers, but they have yet to move on those promises. The government hasn’t tabled a bill, nor has it set aside money for bolstering—or even studying—pay equity legislation.

On top of that, there’s been no commitment to raising the minimum wage federally, Sarosi points out, or investing in jobs women typically do. “There’s been a lot of money put into various sectors, but they’re all sectors that are male dominated. It’s the tech industry, agri-food and manufacturing. There really hasn’t been anything for sectors that are predominantly employing women,” she says, flagging the health and social services sectors.

“The government basically has one year left,” Sarosi says. “Over this year, the key areas we want to see progress on is investing in the care economy, jobs and pay equity. That’s really what this government has campaigned on, and those are really the key areas where they need to come through to make that progress.”