Nov. 22: The fall economic update delivers targeted tax measures and an attempt at reassurance, while Singh's byelection comes into focus and the Maclean's Genius enters politics 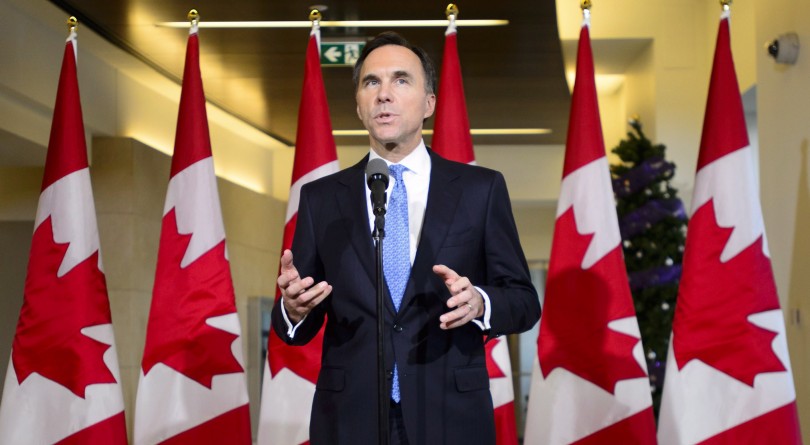 Finance Minister Bill Morneau holds a press conference in the media lockup for the fall economic update, in Ottawa on Wednesday, Nov. 21, 2018. THE CANADIAN PRESS/Sean Kilpatrick

By the time Finance Minister Bill Morneau delivered his fall economic update Wednesday, the government had all but screamed from the Peace Tower that no similar cut-for-cut response was forthcoming. And it wasn’t. Instead, writes Maclean’s Ottawa bureau chief John Geddes, Morneau delivered targeted measures—like allowing businesses to immediately write off the full cost of new manufacturing machinery and equipment, and the cost of certain clean-energy gear, as well as writing off more quickly than before some other new assets—while reassuring Canadians that growth was holding up just fine.  (Maclean’s)

The Trudeau Liberals’ economic-policy instincts don’t lean toward anything as prosaic as cutting taxes. They’ve always been more interested in Ottawa playing a role in the exciting parts of the economy. Thus, Morneau announced another $800 million over five years for the Strategic Innovation Fund, a deep federal cash pool that recently pumped, for instance, $110 million into Toyota’s expansion in southwestern Ontario. Similarly, he earmarked $1.1 billion over the next six years to help Canadian firms break into new markets under something called the Export Diversification Strategy.

Initiatives like these drive free-market true-believers to distraction. They want lower taxes and less regulation, not government innovation and diversification schemes. But Morneau’s update had a little something for them, too. He announced a new External Advisory Committee on Regulatory Competitiveness—responding to business complaints about red tape. As well, ahead of Trudeau’s planned meeting in Montreal with the premiers early next month, Morneau’s statement spelled out where Ottawa hopes to erase trade barriers between provinces, including harmonizing trucking, food safety, and construction regulations—and, naturally, “facilitating greater trade in alcohol.”

All told, the new measures will eat into federal revenues by $14.4 billion over more than five years, while adding to the deficit, which is now estimated to be $18.1 billion this fiscal year, and $19.6 billion the year after, before dropping to $11.4 billion in 2023-24. (Globe and Mail)

It appears federal NDP Leader Jagmeet Singh will finally get his chance to win a seat in the House. Singh has been planning to run in the Burnaby South, B.C. byelection once Trudeau calls elections to fill it and two other vacant seats. Problem is, Trudeau has been dragging his heels in calling that vote, prompting at least on NDP MP to call the prime minister “petty and manipulative.” Now a government official has told the Hill Times the byelections will be called “in January—early, early new year—for them to all take place in February.” (Hill Times)

How serious is the Trudeau government about introducing back-to-work legislation to force an end to the Canada Post strike? “Extremely serious,” says Labour Minister Patty Hajdu, though she refused to be pinned down as to when that such legislation might come. (CTV News)

Green Party Leader Elizabeth May argues any MP who sits on the National Security and Intelligence Committee of Parliamentarians—the oversight body to which former-Conservative MP Tony Clement belonged before his sexting scandal—should have his or her online activity regularly monitored by intelligence officials. And at least one security expert agrees. (Hill Times)