When it comes time to tell a Canadian religious leader to butt out of our political debates, at least we can look to the Charter 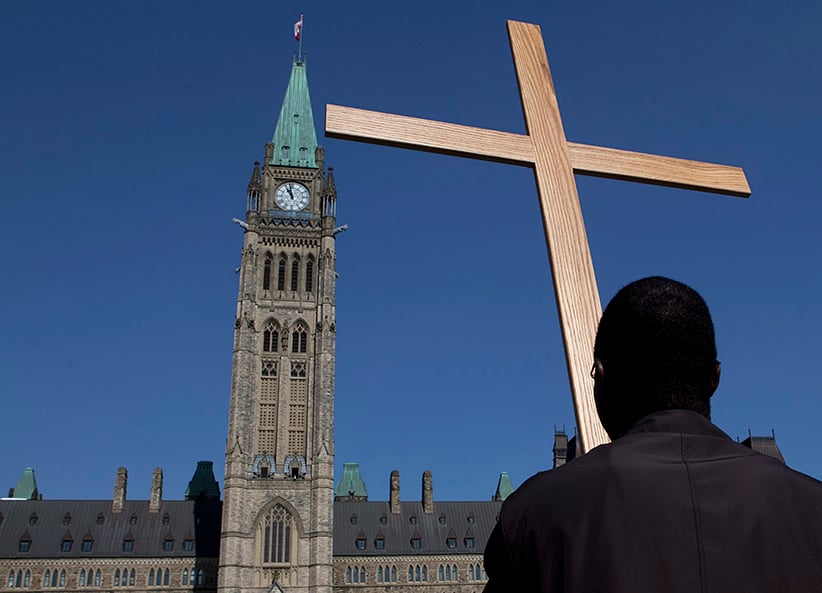 Cross bearer Emeka Ekwosimba leads a crowd of people on Parliament Hill during a way of the cross procession in Ottawa on Friday, April 2, 2010. (Pawel Dwulit/The Canadian Press)

Donald Trump doesn’t do Quiet Revolutions. After the Pope questioned the Christian ethics of building a wall on the Mexican border, Trump flipped his lid, or, at least, flipped the Möbius strip of hair that functions as his lid. “Disgraceful,” Trump blasted, affronted that Pope Francis—merely the spiritual leader of over a billion people—had the temerity to weigh in on a political issue. Turns out many agreed with Trump, as he went on to easily win the South Carolina primary, suggesting maybe the Pope should butt out of America’s political business. Then again, Trump’s rival, Florida Sen. Marco Rubio, invokes God so frequently you might think Jesus was his running mate. It raises the question: do religious leaders have a place in political debates?

Related: What Donald Trump doesn’t understand about the Pope

In Canada, religious leaders have a less overt relationship with politics, but this week, as the government hears recommendations from the special joint committee studying physician-assisted death, it has come to the forefront. In response to the unanimous Supreme Court decision, Carter v. Canada, which ruled the prohibition against physician-assisted death violates the Charter, religious groups mobilized. “The strong message from the Supreme Court is unmistakable: some lives are just not worth living,” testified Cardinal Thomas Collins of the Toronto Archdiocese. “We passionately disagree.” When I spoke to him later, he had no trouble arguing that faith-based organizations have a duty to get involved in political debates. The question is, to what level?

Despite polls showing most Canadians support the court’s view on physician-assisted death, the involvement of religious leaders is understandable. Who should have the right to die? What is the litmus test? Should it apply to children who are, to use the Court’s terms, experiencing a “grievous and irremediable medical condition?” When does “intolerable suffering . . . impinge on their security of the person?” If a doctor refuses to perform euthanasia, is the doctor obliged to refer the patient to a physician who will? Would that be a denial of access to service or, as Cardinal Collins argues, the moral equivalent of taking a life? When laws have such complex ethical dimensions, it invites in spiritual leaders. (The Liberals have sensibly backed off their decision to whip the June 6 vote until they have more time to study the issue.)

Since Confederation, where balancing Catholic and Protestant concerns was paramount, religious leaders have played an active role in Canadian politics. Tommy Douglas came out of the Prairie social gospel movement and influenced generations of progressive thinkers, while evangelical prayer breakfasts continue to this day on Parliament Hill. Whether avoiding the debate about funding Catholic schools in Ontario or attending Sikh, Hindu, Jewish and Muslim celebrations, political leaders court religious communities assiduously. Those are places where people might still vote in blocks.

According to David Coletto, the CEO of Abacus Data, in the last election more Catholics voted Liberal than Conservative while with Protestants the reverse was true. But here is the most striking fact of all: Abacus found 41 per cent of Canadians don’t consider themselves religious at all. And how did they vote? 44 per cent of these non-religious affiliated people—most of them young—voted Liberal. This is not insignificant. As Conservatives choose their next leader, ideas drawn too much from a religiously Christian tradition will not appeal to a broad swath of Canadians. It’s ironic given the religious roots Preston Manning comes from, but it does explain why Stephen Harper tried to keep a lid on social conservative “values” debates—that is, until the niqab debate blew up in his face.

“Many religious leaders may not offer ‘direct’ comments about how to vote—and probably should not, except in cases of extreme corruption or injustice,” says Rev. William Ingram, the senior minister at the Presbyterian St. Andrew’s Church in Toronto. “But it is safe to say that all religious leaders hope that people’s choices are informed and influenced by their spiritual convictions.”

Each religious community is different though. Coletto believes that for Jews, an affinity for Israel and Jewish identity affects voting behaviour, but that is not consistent with every group. “Other minority communities are also united by their faith and their cultural identity,” he says, “but understanding which is more influential is difficult. Are Sikhs in Brampton, [Ont.] compelled to vote for a party because of a religious leader or because of a community leader? In some cases they might be the same person, in others, it may be different.”

Still, Coletto says it’s a mistake to confuse religion with culture. “Moral issues can be impacted by religious beliefs, but also by cultural ones,” he says. “That’s where issues like marijuana use and end-of-life can be swayed by a combination of factors.”

But while religious leaders might not endorse a particular party, if they don’t weigh in at all on issues like poverty, equality, war, refugees or end of life, what relevance do they have? “These are all questions that relevant religions—as well as wise politics—are supposed to explore,” Rev. Ingram told me.

So, does Trump’s challenge to the Pope signal religion’s diminishing role in politics? Likely not. Religion has a place in the political rooms of the nation, but in a secular society, it is not an instruction manual for voting. Religious leaders help guide thinking about complex issues like physician-assisted death that often get reduced to sound bites meant to score political points. The courts and politicians ought to listen to religious leaders, consider their views, and then, in their own separate way craft legislation. But in Canada, when it does come time to tell a religious leader to butt out, we don’t need Trump. We have the Charter.