Will Justin Trudeau miss his anniversary?

Last year in Japan, Trudeau controversially took a day off for his wedding anniversary. In Italy this year, will he do it again? 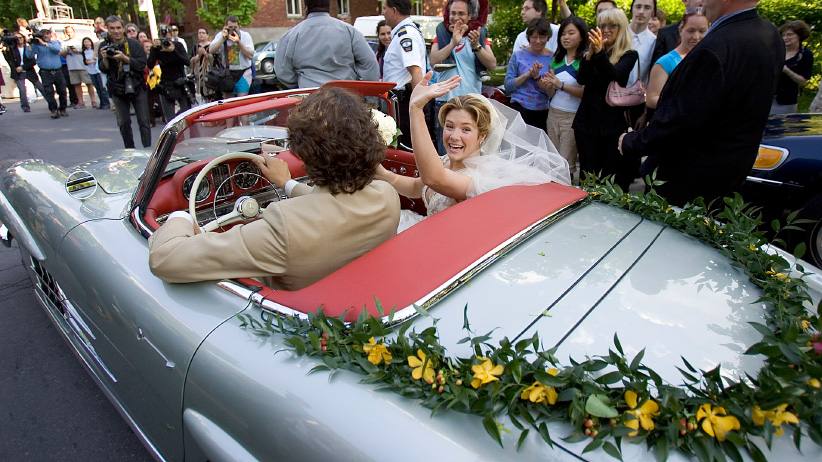 New bride Sophie Gregoire waves to the crowds with her husband Justin Trudeau, son of the late Prime Minister Pierre Elliot Trudeau, as they drive off in his father’s refurbished 1959 Mercedes 300SL, following their wedding ceremony in Montreal May 28, 2005. (Christinne Muschi/Reuters)

When Justin Trudeau took the day off to celebrate his wedding anniversary last year, during a state visit to Japan, Canadians didn’t all like the look of it. In between meeting with members of the Japanese auto sector and beginning G7 discussions in the city of Ise-Shima, Trudeau spent a day at an inn, surrounded by hot springs and the sea.

One year later, Trudeau will be in Italy during his anniversary on Sunday, May 28, following G7 working discussions. After the G7 gathering adjourns on Saturday, he will continue to Rome and Vatican City, where he will have an audience with the Pope. His office hasn’t yet published his itinerary for Sunday specifically, and did not reply when asked whether he plans to take a personal day on Sunday. While some people say he deserves a repose to celebrate his marriage, Canadian public perception suggests he might be wise to not.

“I wish him happy birthday for his wedding, and to Sophie, too,” says NDP MP Alexandre Boulerice, “but I’d be worried that taxpayer money will pay for a trip that is partly personal.” Boulerice says that if Trudeau takes the day off, he should reimburse part of the ticket price.

Last year, Trudeau took his wedding day vacation on May 25, three days before his actual anniversary. The Privy Council Office says Trudeau acquired no expenses to Canadians for that date. “As per the usual protocol for events like the G7, the host country assumes the cost of hosting world leaders,” the Privy Council said in an e-mail.

Typical protocol would suggest that the Prime Minister paid for the cost of the personal vacation day on his own dime, though the Privy Council didn’t clarify. Either way, the move didn’t jive with Japanese culture. “This wouldn’t even happen in a private company,” Tim Iles, associate professor of Asian and Japanese studies at the University of Victoria, told Maclean’s in May 2016. “To say, ‘the business of running the country is fine, I’m going to take one day off’… it’s a question of it coming off as quite irresponsible.”

This time around, however, even some of Trudeau’s opponents think they should give the guy a break. “It’s not like he’s golfing in Mara Lago every weekend,” says Conservative MP David Bagler, a former Green Party member. If Trudeau saves the date for a date with Sophie, he says, “I wouldn’t care in the slightest. It’s really none of my business … If Stephen Harper did something like that, the Liberals would get upset … It’s just partisan games.”

When justifying the vacation day in 2016, Trudeau cited his commitment as a non-negotiable family man. Experts on relationships and mental health supported him in his work-life balance, and to Italians this year, his vacation would likely be equally welcome—so long as he’s not charging taxpayers. “That would be the first question that would pop into minds of Italian citizens,” says Alberto Zambenedetti, an associate professor of Italian Studies at the University of Toronto. “I don’t get the sense it would be frowned upon.”

Compared to other world leaders, Zambenedetti says Italians would be especially forgiving of Trudeau. “It would be seen as somewhat a cute gesture,” he says. “Italy is very smitten by his charm.”