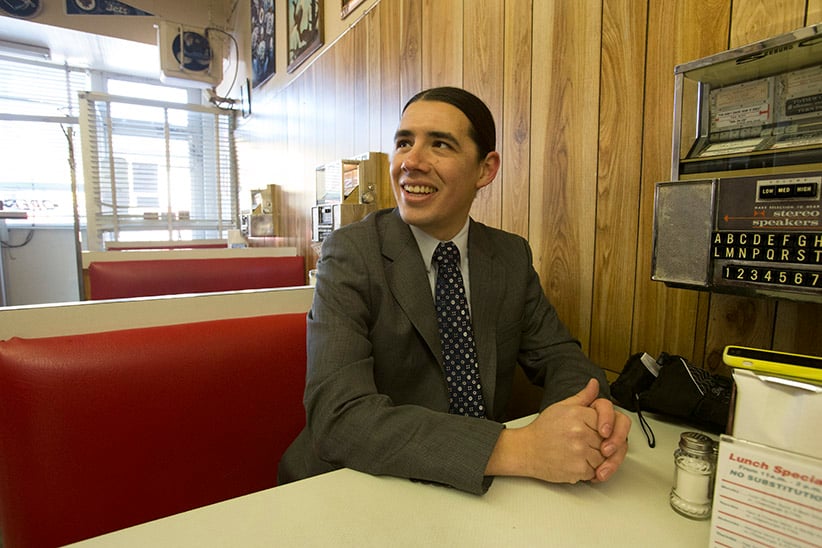 The two men vying to represent Winnipeg Centre, the city’s gritty, core-area riding, have been called many things: puerile, intemperate, messianic, idiotic. And that was just last week.

Over the weekend, Pat Martin, the NDP incumbent who’s held the riding since ’97, called Robert-Falcon Ouellette, his Liberal challenger, “deluded,” “full of s–t” and labelled him “a political slut” for choosing the federal Liberals because “he thought that party gave him better chances of winning.” He went on to accuse Ouellette’s wife—who volunteers weekly in an area soup kitchen—of being “afraid she’ll have her hubcaps stolen if she ventures too far into the riding.”

Neither man actually lives in the riding; yet both, oddly enough, are making the other’s absence from it a campaign issue. (Ouellette lives in staunchly middle-class St. Vital, nowhere near the city’s centre. Martin lives just south of it, in funky, midtown Osborne Village. For almost as long as he’s held Winnipeg Centre, he’s also batted off accusations his home-away-from-Ottawa is actually on Saltspring Island, in B.C., though he’s vowed to sue anyone who tries to suggest it.)

The Conservative candidate, Allie Szarkiewicz, doesn’t live there either. She also made headlines last week—for skipping a packed all-candidates debate at Portage Place, the city’s downtown mall, an aging white elephant intended to lure Winnipeggers back to the core. Somehow, that decision didn’t stop her from running a banner ad in the Winnipeg Free Press the following day, asking voters to “ask her anything.” “Why didn’t you attend the riding debate last night?” Twitter wanted to know.

The former teacher’s absence could almost be forgiven, given what unfolded. Cameras caught Martin mouthing what appeared to be the words “you son of a bitch” to his Green challenger, Don Woodstock. The bus driver occasionally found serenading City Hall opened with a well-aimed jab, welcoming both Martin and Ouellette to the riding; afterwards, he accused Martin of calling him a “f–king prick” and of elbowing him in the ribs.

Wab Kinew, an associate vice-president at the University of Winnipeg who has lived in the riding for 14 years, describes himself as “disillusioned” by the choices facing voters: “I look at the local candidates and I’m not choosing from the best of all options. It’s more like I’m trying to mitigate risk in terms of who I vote for.”

It could be laughed off as a wacky sideshow were it not for what it distracts from: the poverty, addictions and mental health issues that plague so many of Winnipeg Centre’s residents, how a riding at the heart of one of the wealthiest and safest cities in the world can lay claim to some of Canada’s poorest postal codes, and what exactly the candidates—only one of whom can actually vote there—plan to do about it?

Martin, who was forced to issue a blanket apology for a week’s worth of intemperate language—it was unclear which incident the apology referred to—declined Maclean’s request for an interview. His camp appears to have put the MP, “a man with no discernible impulse-control whatsoever,” as the Free Press described him last week, in a well-earned time-out.

Meanwhile, voters appear to be tiring of his shtick. His salty tongue earns him front-page headlines every six months or so for, among other things, calling Winnipeg “retarded” and Conservative operatives “rat-faced whores.” One new Ouellette supporter, an NDP activist, told Maclean’s she’s switched votes because Martin is “disrespecting the office and the riding by the way he can’t hold his temper.”

The reason Martin appears so hot under the collar this fall is that he’s actually facing real opposition this time, as even he has admitted. You won’t find Ouellette’s approach in any playbook. Instead of targeting Liberal voters, the PhD-holding, longtime Naval reservist and father of five is reaching out to the 50 per cent of his riding who don’t vote, pushing his way into the tiny, glorified shacks in the riding’s marginalized, industrial northwest, home mostly to Indigenous residents and newcomers.

“A lot of people are saying, ‘We’ve never had anyone come to the door,’ ” he told Maclean’s, during a recent afternoon in the riding with him. The earnestness and naivete pushing him into homes where residents barely agree to speak to him is the same plucky mix that propelled the 38-year-old Cree politician from fringe candidate in Winnipeg’s mayoral election last year to a solid third-place finish.

His pitch also deviates from the Liberal playbook. As soon as he gets a foot in the door—he rarely seemed to make it much further—Ouellette starts talking up the Liberals’ plan for “a guaranteed income for families with kids.” The child benefit, worth $6,000 a year, he says, is “going to lift 315,000 kids out of poverty,” by allowing single moms to “get out of their one-bedroom rooming house,” or “put food on the table.”

The riding, he tells a grandmother out walking her daughter’s barking mutt, “needs a different type of politics. It needs someone able to connect with people from the same socio-economic background, who can say there is a path to success, there is a better future for more of us. That we need not simply exist in this old prison of our making, of our own mind.”

In that regard, Ouellette, who spent time “couch-surfing” on Colony Street, in the riding, growing up with his single mom, has a leg up. And in every Indigenous home he visits, he also makes sure to mention “CFS”: Manitoba’s Child and Family Services, synonymous in this part of the city for taking Indigenous children from their parents.
He’s out stumping every day and he has resigned his job at the University of Manitoba to concentrate on the riding full-time. So why has he gone all in?

Like many others, Ouellette senses “once-in-a-lifetime” hunger for change in Winnipeg, sparked by last summer’s murder of 15-year-old Tina Fontaine, an Indigenous youth whose body was found in the riding; the brutal sexual assault of 16-year-old Indigenous student Rinelle Harper, who was also found in the riding; and the ongoing conversations on the city’s ugly ethnic divide the incidents helped propel.

Ouellette believes this desire for change, being spearheaded both at the grassroots level and by new mayor Brian Bowman, could move Winnipeg “in a fundamentally different direction.”

“This desire for change in a society only comes along once in a generation, tops. And it can be lost,” he adds. When he considers Winnipeg, what strikes Ouellette are the host of issues related to the “great divide” currently separating it. “If you want to deal with the issues affecting Winnipeg, it’s going to be here,” he adds. “It’s not going to be the south end of the city.”

Whether he and his family would actually move here if his campaign is successful is still very much up for debate. His kids, he says, are very happy in their current schools, and he only gets one vote: “It’s not my decision.”