Unveiling military procurements is a proud Ottawa tradition, even if executing on them is another matter 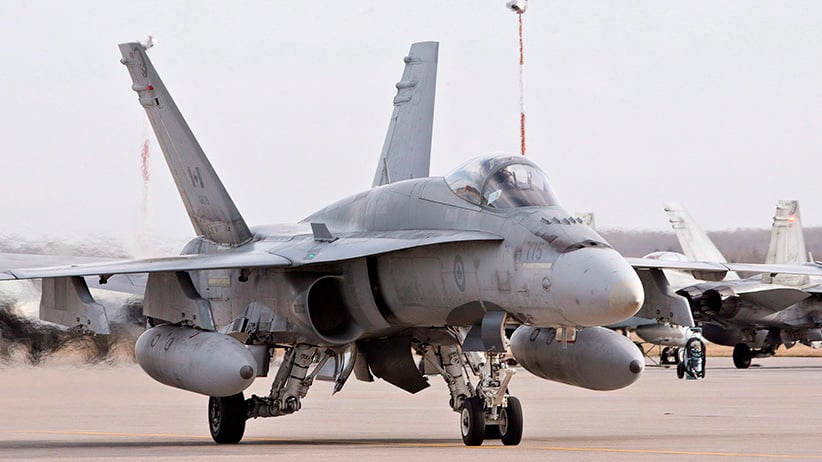 A pilot positions a CF-18 Hornet at the CFB Cold Lake, in Cold Lake, Alberta on Tuesday, October 21, 2014. A long-awaited market analysis into which fighter jet could replace the CF-18s tells the Harper government it can postpone a decision and keep flying the current fleet until 2025, but it will cost roughly $400 million. (Jason Franson/CP)

Official Ottawa offers few spectacles—aside from the changing of the guard, the Speech from the Throne, or the first public glimpse of a new pair of prime-ministerial socks—to compare with the announcement of a multibillion-dollar military procurement.

Tradition dictates the mustering in tight formation of a phalanx of cabinet ministers and at least one uniformed general. Their talk of doing right by our men and women in uniform, while ensuring the Canadian economy gets a nice boost from whatever they’re buying, is similarly ritualistic. Anyone listening for the first time might almost imagine past procurements must have been managed successfully to instil such confidence. Of course, this is not the case.

Today was no exception, as fully four ministers, plus the Chief of Defence Staff, marched into the National Press Theatre to tout the latest iteration of a federal plan to buy fighter jets. If you’re searching your memory and thinking, “Isn’t this some sort of seasonal event?” that’s understandable. On Nov. 16 last year in the same space just off Parliament Hill, assorted ministers and generals unveiled the Liberal government’s plan to “immediately explore” buying 18 Boeing Super Hornets, off the shelf, while launching a five-year competitive bidding process to finally acquire a fleet of advanced jets to replace Canada’s aging CF-18s.

READ: Why military funding in Canada is in such a lousy state

The event staged today looked and sounded much the same but with some important fresh elements. American aerospace champion Boeing is in a bit of trade war against Canada’s Bombardier, so the Super Hornet buy is off. Instead, Canada will pick up 18 of those familiar old F-18s, used from Australia, to tide our air force over until up-to-date jets are finally acquired.

As well, in a twist that looks pointedly aimed at Boeing, the government announced that in the bidding process for the new jets, if any company that’s competing just happens to be embroiled in a trade scrap with Canada, it will be penalized. “When the bids are assessed,” reads the new condition, “any bidder responsible for harm to Canada’s economic interests will be at a distinct disadvantage.”

It’s all quite complicated. (That’s also part of the tradition.) But here are some key points raised at today’s news conference, which might help to clarify the situation.

Isn’t it odd to be buying used jets of the same vintage as those we’re trying to replace? In the House back on May 29, Defence Minister Harjit Sajjan was pretty clear on this. “Yes, there were options for buying old ones,” Sajjan said when asked about the available alternatives. “No, we do not want to buy used equipment; we want to invest in new planes.” Something about the Australian offer has clearly changed his mind since last spring. But, on exactly what, Sajjan said only, “This option wasn’t available at that time.”

But didn’t Canada get burned buying used British submarines not long ago? Indeed, those four subs, bought by then-prime minister Jean Chrétien’s Liberal government in 1998, were supposed to be a bargain. They’ve ended up being plagued with problems, costing unexpected billions to keep in service. But Chief of Defence Staff Jonathan Vance today waved off the comparison. “Completely different circumstances, of course,” said the general. “The submarines were abandoned and were essentially on a scrap heap, and hadn’t been run for quite some time. These [Australian] aircraft, now that we know which ones we’re going to get, we’ll be able to do all the engineering necessary to ensure that they will continue to fly.”

READ: Why can’t we have some of those hip new fighter jets?

Isn’t Boeing bound to sue Canada if its friction with Bombardier over the civilian jet market ends up costing it this lucrative military contract? “We cannot prevent anybody,” Public Works and Procurement Minister Carla Qualtrough said, “from engaging in litigation with us should they not think this is appropriate.” However, Qualtrough hoped it wouldn’t come to that, saying the policy “incentivizes” companies to “behave in such a way that they won’t be at a disadvantage at the time of assessment.”

Still, doesn’t the new penalty for causing “harm to Canada’s economic interests” further muddy the already notoriously opaque military procurement process? “Well, I’m hoping very much that we’re not going to make it more complicated,” Qualtrough said. Still, she couldn’t say how the new stipulation will be applied. “I think that there are both objective and subjective elements that could possibly be at play here,” she said, “but I wouldn’t want to in any way preclude the important conversation that we’re going to have with industry and experts.”

And, by the way, what happened to Justin Trudeau’s 2015 campaign promise not to buy the Lockheed Martin F-35?  The Liberal government already signalled last year that Lockheed Martin can compete for the jet contract, no matter what Trudeau said on the hustings or what was written in the Liberal platform. For old time’s sake, though, Transport Minister Marc Garneau was asked again today about that 2015 campaign commitment. “Well, the decision since we’ve come to office is to ensure that we will have an open and transparent process,” Garneau said. “That’s the decision we’ve made, and that’s exactly what we’re going to do.”