With friends like these: Ford revelations leave Tories under fire

New revelations about Rob Ford’s behaviour hit the news just as he revved up his involvement in the federal Conservative campaign. Oh, dear. 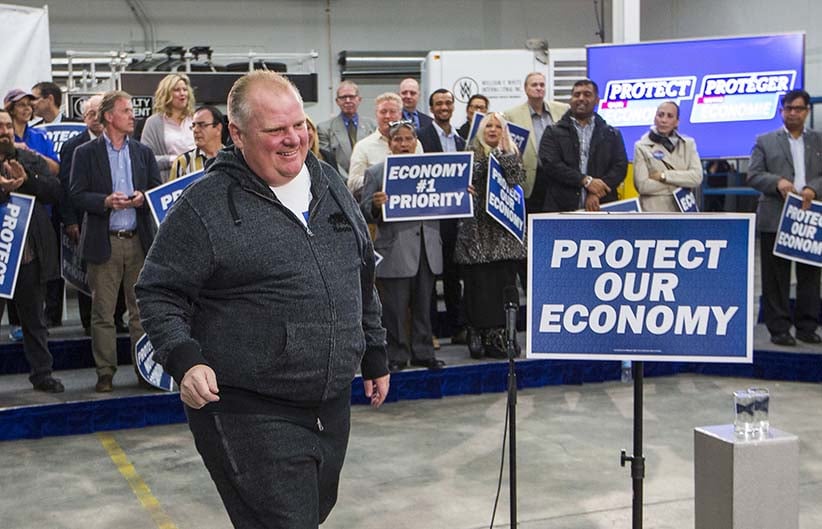 Unbeknownst to you, a dirt clod is flying through the air, directly toward your head. You’d hope some bystander would see it in time to shout, “Duck!” But that doesn’t happen. So afterward, as you wipe the grit from your eyes, you’re inclined to a moment of self-reflection. Should you have known the clod was coming?

Here’s where the Harper campaign finds itself today. Hungry for votes in the Greater Toronto Area, they embraced the populist might of Rob and Doug Ford, welcoming them this week to a campaign event in the Fords’ stomping ground of Etobicoke, arranging to share the spotlight with them on Saturday at a rally for the Prime Minister in Toronto. The brothers’ propensity to share unwelcome thoughts (Rob mused in late August about Doug replacing Stephen Harper, should the Tories lose) mattered not. Nor did Rob Ford’s admission to using crack cocaine while mayor of Toronto. This was Team Blue closing ranks.

So Rob and Doug hit the pavement, cameras in tow, to knock on doors in key swing ridings such as Etobicoke–Lakeshore and Scarborough Centre. “I think we’re doing well out there,” Doug Ford boasted on Tuesday. “We’ve had a really good response.”

Then, within 36 hours, it was all up the spout. On Wednesday evening, Maclean’s posted on its website an excerpt from Mayor Rob Ford: Uncontrollable, a book written by Mark Towhey about his time as Rob’s chief of staff at city hall. The passage features a harrowing, damning account of Rob Ford in a screaming match with his wife, Renata, in which he berates and threatens her over drugs, money and, possibly, a gun in their house—all while their children were trying to sleep upstairs. Links to the item quickly spread on social media.

By Thursday morning, the Tories were under fire. At an appearance in Trois-Rivières, Que., reporters asked whether Harper was associating himself with Rob Ford, given that Towhey’s account painted a grim portrait indeed of life inside the Ford household. Liberal Leader Justin Trudeau said Harper should be “embarrassed that he’s having to count on the support of Rob Ford for his re-election.”

“What bothers me most is the misogyny,” he went on during an event in Montreal. “The Ford brothers should have no place on a national campaign stage, much less hosting a prime minister at an event this weekend.”

Harper was customarily clipped in response, saying queries about Towhey’s account should go to “those individuals” involved—apparently, meaning Rob and Renata Ford. He noted, without uttering the Ford name, that the family’s support of the federal Tories is “longstanding and well-known.” Meanwhile, Conservative campaign officials stressed that their party, not the Fords, were responsible for organizing Saturday’s event. This, despite a boast by Doug Ford earlier in the week that the brothers could bring out “thousands” in support of the PM, if asked.

Whoever is making the arrangements on Saturday, Harper’s handlers were caught off-guard. Campaign spokesman Kory Teneycke acknowledged on Thursday to Maclean’s they did not know details from the book would come out before the election. Yet he stuck to the line that the Tories welcome the Fords’ backing. “The media’s continuing fascination with the Fords is a mystery,” he said. “The Fords have always supported the Conservative government. Something that continues to happen isn’t a news hook.” As for Saturday’s rally, Teneycke said the brothers will be attending, insisting, “We’re happy to have them with us.”

To a degree, the Tories’ surprise is understandable. Until a few weeks ago, Towhey’s publishers had planned to release his much-anticipated book on Nov. 9, with advance excerpts running about four days earlier. Then, with news that another Ford book would hit shelves on Oct. 29—this one by Toronto city councillor John Filion—they moved its publishing date up to Oct. 27.

That’s where Maclean’s scheduling considerations came in. Normally, the magazine would have run its pre-arranged excerpt five days in advance of the book’s release, on Oct. 22. It bumped up its publication to prevent it from being buried in its post-election issue, which will be chock-a-block with federal political coverage.

But let’s face it: The Tories’ marriage of convenience with the Fords was always a calculated risk. Doug has a history of lashing out at the perceived establishment embodied by mainstream parties, both liberal and conservative. Non-Torontonians are as appalled by Rob’s history of drug use and abusive rants as his supporters here are blasé about them. And, beneath the former mayor lies a lode of revelations that, if Towhey’s account is anything to go by, remains only partly mined.

This particular clod of dirt was visible from miles away.

—With files from Martin Patriquin in Trois-Rivières, Que.