Women's issues take centre stage at Up For Debate event 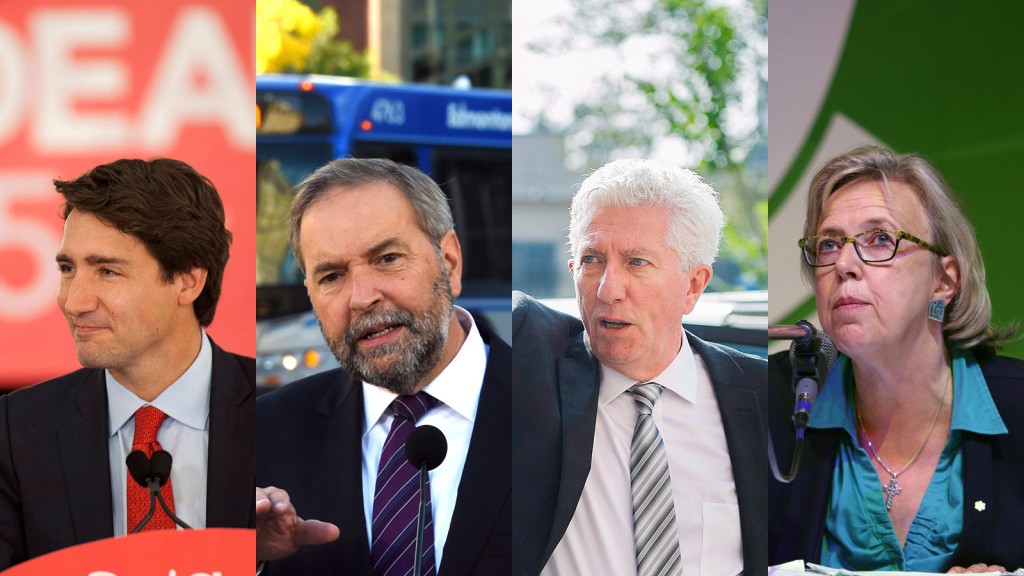 If there’s a division between women’s issues and the issues of Canadians in general, it’s a wide and murky river that floods beyond its banks. Is climate change a women’s issue? What about first-past-the-post democracy? Housing? Child care?

Topics of all types were raised in interviews with four of the five party leaders: the NDP’s Tom Mulcair, the Liberals’ Justin Trudeau, the Greens’ Elizabeth May, and the Bloc Québécois’ Gilles Duceppe. Hosted by a coalition of women’s groups called Up for Debate, the interviews over so-called “women’s issues” began airing last night and will continue being broadcasted throughout the week. Although the initial plan was to host a live debate, Mulcair retracted his RSVP to the event after Harper refused to partake, which led Up For Debate to scrap the debate format in favour of these solo interviews recorded in advance of an evening of panel discussions with experts and journalists. Though Mulcair took part in these interviews, Harper declined to participate in them, and the event’s master of ceremonies, comedian and writer Jess Beaulieu, didn’t let the crowd forget it. She speculated that the day Harper takes interest in women will be the day women start to bleed oil on a monthly basis.

Related: Excerpts from the leaders’ answers at Up For Debate

Without an invitation to speak at the Globe and Mail debate in Edmonton last week, May seemed to have saved up her opinions for a vehement interview that would have made Simone de Beauvoir pump her fist. May argued that proportional representation would mean more women elected to parliament, and she highlighted the importance of the women’s caucus she founded to address sexism among the “alpha males” in Parliament. “I have never worked in a workplace as male-dominated and as testosterone-flooded as the House of Commons,” she said.

Trudeau promised a 50 per cent quota of women in the cabinet, although, when asked about proportional representation and other topics, such as how much he would invest in women’s shelters, he proved a fluent orator of political vague-ese.

Although there was technically no debate, the interviews were clipped together as such. Mulcair mentioned his own experience paying for child care, referring to the need for a national child care plan, which the Liberals didn’t implement. “It’s not because they failed to get it done that it can’t be done,” Mulcair said. Trudeau appeared to respond by playing the role of the realist, arguing that only a platform like his, with a three-year deficit plan as opposed to Mulcair’s proposed balanced budget, would put and keep kids in daycare.

Related: Harper, Mulcair, Trudeau and May give one-on-one interviews with Chatelaine

In his interview, Duceppe was harped on for his party slogan, “Qui prend pays prend parti,” which translates to “Choosing a party is choosing a country.” It’s a phrase inspired by a French idiom encouraging women to take husbands. Duceppe insisted, “We’re talking about party; it is absolutely not a question of women.” He also took a stance on the question of hijabs during citizenship ceremonies. “Asking women to make themselves invisible is not only creating inequality, it is asking them to disappear as individuals.”

But the quote that will likely perk the most ears came from May, regarding the abuse of women. “We need to name it and shame it and be out there for a zero tolerance against violence against women,” she said. Mulcair said there are now new rules in Parliament, thanks to New Democrat MP Jean Crowder, while Trudeau worried for his own children as they approach their teen years. The leaders also raised the issue of missing and murdered Indigenous women.

“I’m proud to be a feminist,” said Trudeau. “Je suis un féministe,” echoed Mulcair. But May, as the only feminine feminist in house, was given the last word, which she used to wish good luck to all women in Canada.