Word of the day: Change 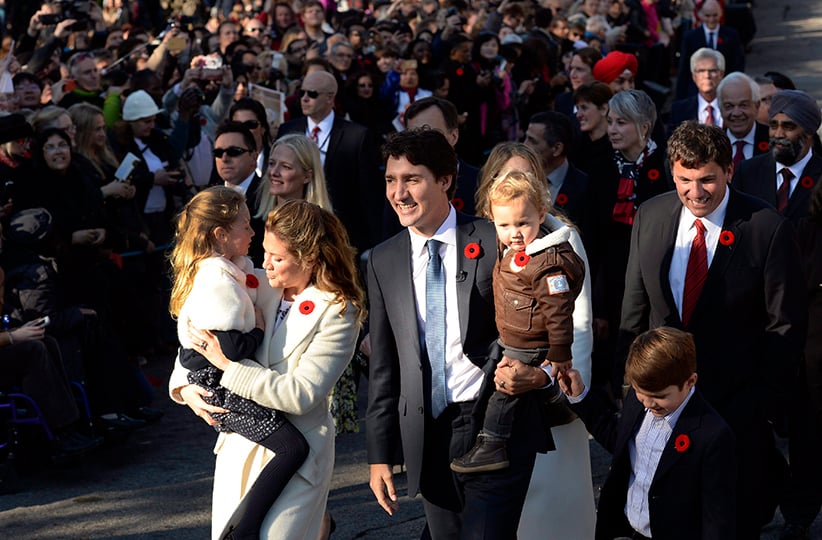 OTTAWA — Justin Trudeau has launched a new Liberal era with a 30-member cabinet that features predominantly fresh faces, an equal number of men and women and probably the most diverse line-up of ministers in Canadian history.

The newly minted prime minister emerged Wednesday from the formal swearing-in ceremony boasting that he’s put together a cabinet “that looks like Canada.”

Fully 18 of the newly minted ministers are rookies who won election for the first time on Oct. 19, including the all-important finance minister, millionaire Toronto businessman Bill Morneau.

The cabinet includes two aboriginal ministers, two disabled ministers, one openly gay minister, a refugee from Afghanistan and four Sikhs — one of whom was once wrongly accused of terrorism, tortured and detained without trial for almost two years in India.

From the moment Trudeau and his team arrived by bus at Rideau Hall and walked together up the long, tree-lined driveway to the Governor General’s mansion, the swearing-in event was designed to convey openness, optimism and inclusion _ a stark contrast to nearly a decade of what the Liberals call the one-man, secretive rule and politics of division of Stephen Harper’s Conservatives.

“We’re a government that wants to earn Canadians’ trust by demonstrating that we trust Canadians,” Trudeau said.

“Openness and transparency” will be a hallmark of his government, he insisted, with the media allowed to hold government to account, MPs empowered to be powerful voices for their communities and public policy based on evidence, not partisanship.

Highlighting his campaign promise to deliver “real change,” Trudeau weighted his cabinet with newbies, giving them some of the most crucial and influential portfolios, some of which he has reconfigured or renamed.

Former journalist Chrystia Freeland, who won a byelection in Toronto two years ago, will head up International Trade, while Navdeep Bains, who is back as an MP after being defeated in 2011, becomes minister of innovation, science and economic development.

The rookies will be backstopped by seven veterans with previous federal or provincial cabinet experience, including: Ralph Goodale in Public Safety; Stephane Dion in Foreign Affairs; John McCallum in Immigration, Refugees and Citizenship; Carolyn Bennett in Indigenous and Northern Affairs; Judy Foote in Public Services and Procurement; and Scott Brison in Treasury Board.

Trudeau himself, who has promised to usher in a new era of collaboration with the provinces, takes responsibility for intergovernmental affairs and youth.

Trudeau’s Liberals won a strong majority of 184 seats, with representation in every province and territory. His cabinet reflects that, with 11 ministers from Ontario, six from Quebec, three from British Columbia and two each from Alberta and Manitoba. Saskatchewan, Nova Scotia, Newfoundland and Labrador and Prince Edward Island all have a single representative in cabinet, as does Nunavut.

Trudeau was unrepentant when asked why gender parity was so important.

Trudeau and his team arrived together at Rideau Hall shortly after a statement from a spokesperson for Governor General David Johnston confirmed that Harper had resigned as the country’s 22nd prime minister.

Holding the hand of his wife Sophie Gregoire-Trudeau, Trudeau led his ministers-to-be on a walk up the long driveway leading to the Governor General’s mansion, accompanied by a bagpiper and cheers from a throng of well-wishers and onlookers who lined the route.

For the final steps of the stroll, Trudeau was joined by his three young children, carrying toddler Hadrien in his arms.

The new Liberal prime minister and cabinet were scheduled to hold their first meeting later Wednesday.