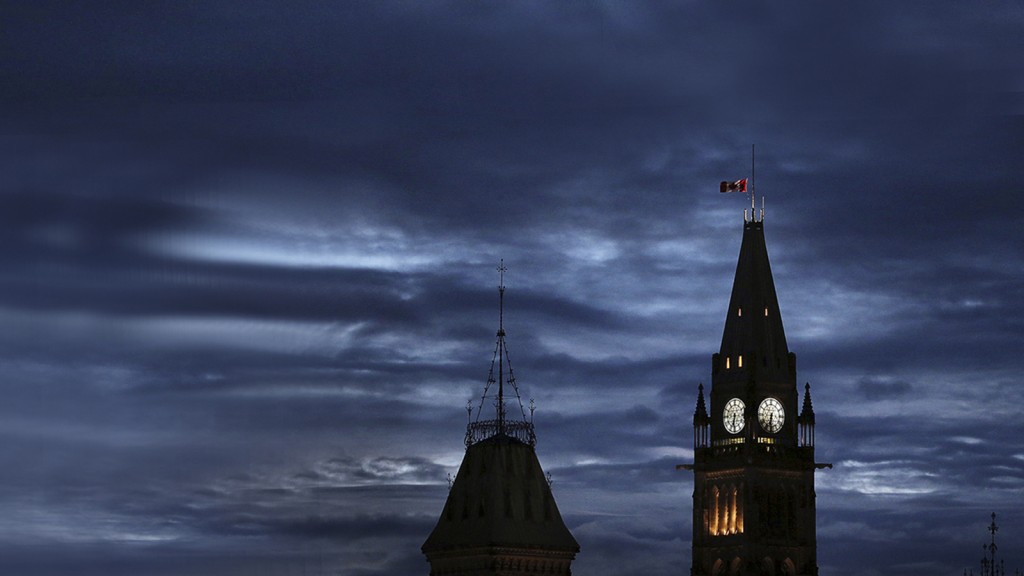 Just before 8pm Friday evening, Parliament Hill was empty. For a preciously surreal moment, as I walked toward the Peace Tower, I seemed to be the only one there.

Before the great clock had begun to chime eight, the moment had passed. There was no great announcement, no pomp, no circumstance, no cheers, no lineups, no rush. Parliament Hill was merely suddenly open again. The gates were clear, the barriers removed. The people began to come in.

People snapped pictures. People gathered near the Centennial Flame. A father had his two kids pose in front of it for a photo. Two men carried in tripods to setup their cameras. A few people wandered up the interlocking stones toward Centre Block. By 8:04pm, in the lamp-lit dark, there were maybe two dozen people, and only a few police officers in sight.

A man sat on the edge of the monument that encircles the flame and posed for a photo. Two men and two women arrived carrying food in styrofoam containers, walked onto the west lawn and sat down to eat. A man and a woman took a seat on the east lawn. A couple walked hand in hand up to the flame. A man leaned against one of the lamp posts that lights the way to the Peace Tower. A couple kissed. Someone had brought a dog. Save for myself and a pair of colleagues from the magazine, there were not obviously any other reporters for the hour I was there. (I thought perhaps I’d not gotten a memo.) The crowd maybe never grew larger than a few dozen. People came and went. At times the only sounds were the lapping of water around the flame and the bustle of traffic along Wellington Street. It was quiet and peaceful and a kind of perfect.

Strollers were pushed. A little girl chased her father around. Five dudes took a seat around the flame to eat what one assumes was poutine—”poutinefest” was being held down on Sparks Street. A man on rollerblades, with flashing red lights attached to his elbows, glided along the crescent that takes you from East Block to Centre Block and past the West Block construction zone. A possibly troubled woman wandered through yelling out to everyone and no one in particular, police officers emerging to keep a careful watch.

It perhaps seems odd that we would just open the Hill up again like this. But it was also maybe wonderful enough that you didn’t want to think too hard about the situation.

The splendour of the Hill is possibly not always explicitly tied to what goes on within the walls of its buildings. I don’t imagine anyone thinks of that day’s question period when they’re throwing a frisbee around or daydreams about committee study when laying on the grass. But that the great venue of our federal democracy is a lawn, a park and a backyard for all of us means something. If even for things that have nothing to do with the practice of politics, it is good that we are even momentarily close to the symbol of our democracy and the home of our formal debates.

You could tonight walk right up to the front door, sealed shut as they were. You could stand under the Peace Tower and read the words of John A. Ritchie that are inscribed over your head: “The wholesome sea is at her gates … her gates both east and west.”(I don’t recall the last time I’d noticed those words, but figured I’d note them tonight.) You could stand and its base and look up at the Peace Tower, magnificent and lit up against the night sky—an honour to approach on the way to work and as beautiful a sight as a building could provide. I couldn’t hear it tonight, but when the air is right and the rest is quiet enough, you can sometimes hear, if memory serves, the flag atop the tower rippling against the wind.