Our House gets back to its business

We are here and here we are 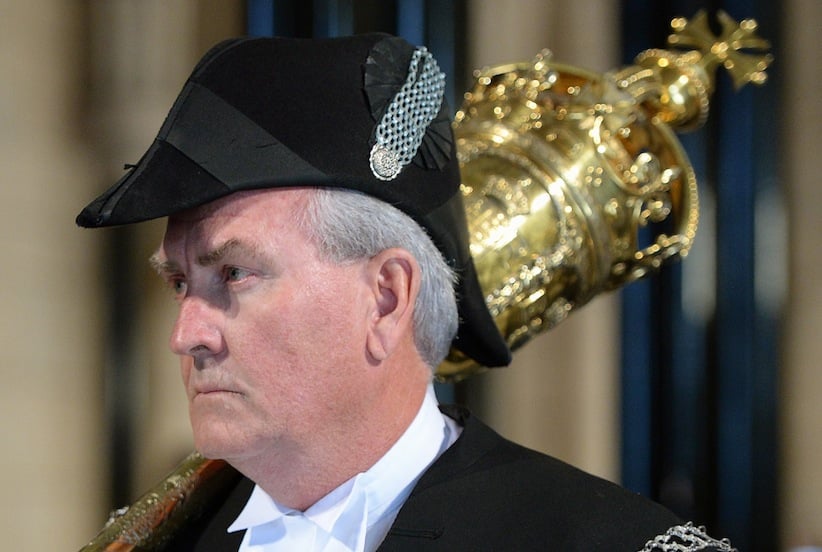 There were, at the start, the pleasing formalities—the morning prayer, the tabling of petitions—but let the record show that the first great glimpse of real returning normalcy arrived at 10:20 a.m. this morning.

It was at that moment, with the Prime Minister having reviewed the relevant legislative initiatives of his government and then promised new bills to come, that the Conservatives applauded while, across the aisle, the New Democrats and Liberals sat impassively and motionless.

There was the stuff. The first sight on the horizon of the future ahead.

Until then it had been ovations and pride. Moments of silence. Spontaneous singing. This great chamber announcing its return with defiance and joy and relief, whatever the bullet damage to gawk at down the hall.

What had started near 10 o’clock on the Conservative side as applause for the arrival of the Prime Minister from the adjacent government lobby became a unanimous standing ovation in anticipation of the day. The House’s business had not yet officially resumed, but the Speaker’s parade approached.

There was a roar at the first sight, through the great doors and out into the marble foyer, of Kevin Vickers. A louder roar when our sergeant-at-arms first set foot on the green velvet and a roar again when he placed the Mace upon the table. There were a couple nods from him and he seemed to blink away tears and then he removed his bicorne hat and walked back down the aisle to his desk at the end of the room. There he stood, our minder, solemn in his black tailcoat and white stiff-wing collar with white tabs and sterling silver collar of S-links, medals pinned low on his chest, as the members on the floor and the visitors in the galleries continued to applaud. The members thumped their desks and then finally the Speaker spoke up en francais—”A l’ordre.”

The Speaker said the daily prayer and the daily moment of reflection was observed and then a voice on the government side warbled the words “O Canada” and quickly the rest of the House joined in. A woman in the south gallery stood crying, a gentleman beside her offering comfort. The parliamentary secretary to the government House leader then tabled responses to 62 petitions and then a moment of silence was observed for Cpl. Nathan Cirillo. NDP MP Lysane Blanchette-Lamothe, in her spot, held her infant son under a blanket.

The Speaker announced the time for statements by ministers and the Prime Minister stood and all sides stood to applaud. Harper then thanked the leaders of the NDP and Liberal party and all sides stood once more to applaud. Seeming to speak without text, he looked at his own side and across the aisle and encouraged everyone to take care of themselves in the days ahead. He acknowledged yesterday’s loss and honoured our national forces and he said that we would not be intimidated. Jabbing the air as he more regularly does in the heat of question period, he announced this place’s return.

“As for the business of government, well, here we are here,” he declared, “in our seats, in our chamber, in the very heart of our democracy, and our work goes on.”

At his turn next, the NDP leader stood, square and serious, buttoned his jacket, looked up at his wife in the gallery across the way, and then declared something like victory.

“Mr. Speaker, it is an honor for Catherine and me to be here today to speak in this House. Yesterday, a gunman went here to try to silence us, to try to silence the values ​​that our country represents: peace, tolerance and diversity,” Mulcair said. “But he failed.”

All sides stood and applauded.

“Yesterday’s events were a shared national tragedy,” Trudeau offered with his turn. “It is fitting that we have come together in this place immediately to let the world know that Canada’s values are strong, our institutions are resilient, and our people are united.”

And when the Liberal leader was done, there was a hug with each of the Prime Minister, the leader of the Opposition and the sergeant-at-arms.

After short statements then from Louis Plamondon on behalf of the Bloc Québécois and Elizabeth May on behalf of the Greens and Jean-Francois Fortin for the Forces et Democratie and Independent MP Maria Mourani, the House proceeded with its business—the tabling of reports, the presenting of petitions. Finance Minister Joe Oliver stood and moved that a ways and means motion be concurred in and the Speaker asked if the minister had the House’s consent and one side yelled out “Yay!” and the other side yelled out “Nay!” The Speaker said he thoughts the yays were more abundant, but the nays begged to differ and so the members were called in for a vote.

By noon, the House was debating Bill S-5, an act to amend the Canada National Parks Act to establish the Nááts’ihch’oh National Park Reserve in the Northwest Territories. Later, the House would concern itself with Bill C-35, an act to increase penalties on those who harm service, police or military animals.

“Mr. Speaker, today we are here,” Thomas Mulcair began rather dramatically. “Today we … carry on.”

The NDP leader pressed the Prime Minister for four rounds and then asked his counterpart to commit to some basis for the days ahead.

“Will the Prime Minister join me in committing that no matter what differences we may have in the days or weeks to come that we will all approach this complex issue with the respect and dignity it deserves,” Mulcair asked, “knowing that however we sometimes disagree, every member of this House is committed to the safety and security of all Canadians?”

There was a smattering of applause on the Conservative side.

“Mr. Speaker, I would be happy to see all members of Parliament and all parties unite around the idea that whatever our differences, we are committed not only to the safety and security of Canadians but to the free and democratic society we all hold so dear,” Harper replied.

“I think it is important to remind Canadians at times like this, in spite of the fact that we are considered and are in fact a relatively young country, from the great pact of 1867, we have one of the longest unbroken forms of governance, particularly democratic governance, anywhere in the world today. It has been unbroken by war, unbroken by civil disorder or national catastrophe for almost 150 years now. It is a tremendous country that we are all fortunate to be part of and I know we are all committed to making it better.”

As the Prime Minister surveyed our history, Mulcair nodded along and when Harper finished, the Liberals and New Democrats joined the Conservatives in standing to applaud.

Trudeau and subsequent members of the NDP would then press the government side on various aspects of the challenge we now face. It would be 13 questions before we got to something else—the NDP’s Sadia Groguhe asking about Ebola. Libby Davies would then ask about preparations to deal with the chikungunya virus.

While the official Opposition went on to ask about foreign aid and the welfare of Aboriginal children and credit card fees and mail delivery, the Liberals dwelled on the practicalities of confronting terrorism.

Trudeau pressed the government about the budget of CSIS, then seemed to express the slightest aggressiveness in questioning the government about preventative detention. Public Safety Minister Steven Blaney sighed, “We will move forward and seek support from the opposition, which unfortunately we have not always had in the past.”

Liberal MP Wayne Easter and Blaney later tangled over the law. Asked about increasing parliamentary oversight of our security agencies, the minister chided: “Mr. Speaker, it seems that my colleague wants to have his cake and eat it too.”

There was some yapping between Jason Kenney and the Liberals. There were grumbles here and there.

Nearer the end, NDP House leader Peter Julian asked the government House leader to agree that this was a good use of 45 minutes and Peter Van Loan stood and said that he was proud of this place every day. And then Julian and Van Loan managed to discuss the next week’s business—the asking and answering of the traditional Thursday question—without haranguing each other.

There will no doubt be days ahead when some or all of us are less easily proud for one reason or another. There will be louder grumbles, more yapping, less hesitancy, greater conflict, fewer unanimous ovations. And a lot fewer hugs.

How well we do depends on how well we hold each other and ourselves accountable.

The House carried on then for four more hours, probably largely without notice. The speeches given were recoded, but will maybe never be reported and were possibly little heard. The galleries were empty and the chamber sparsely filled when the first hour of debate on M-505 concluded tonight at 7:14 p.m. With that the House was declared adjourned. Nine hours after Kevin Vickers carried it into this place in that triumphant moment, the Mace was quietly picked up from the table and carried away by another officer.