Face to face with Michael Zehaf-Bibeau 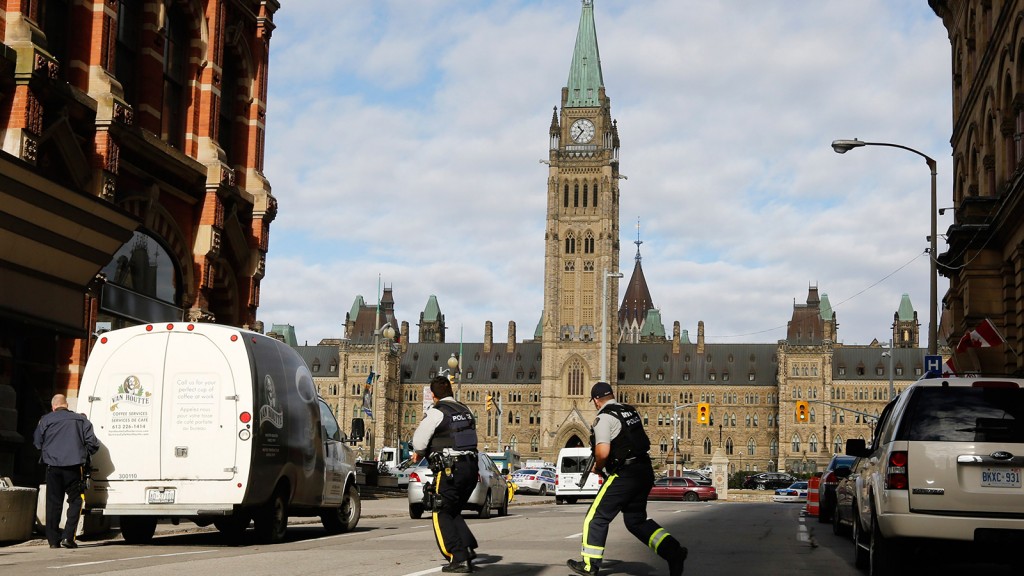 And there at last he was, on video screens arranged around the room—the same room in Parliament’s Centre Block, in which Conservative MPs barricaded themselves and took up flagpoles as weapons on the morning of Oct. 22. Just outside this room—the ornate and historic Reading Room that hosts the governing party’s weekly caucus and where the fire of 1916 is said to have begun—was where Michael Zehaf-Bibeau fired and was fired upon, the shootout at the literal centre of Canadian democracy.

He did not look like his mug shot. His hair was not dishevelled, his face seemed fuller, his beard trimmed. He seemed agitated, but he was not wild-eyed or frantic. For 55 seconds, he explained to his phone’s camera why he was about to do what he would do—”just aiming to hit some soldiers just to show that you’re not even safe in your own land, and you gotta be careful.” This was the video—minus 18 seconds of footage still withheld for now for operational reasons—that was discovered on the cellphone that was left in a Corolla that Zehaf-Bibeau abandoned on Wellington Street in front of Parliament Hill.

Bob Paulson, commissioner of the Royal Canadian Mounted Police, was here at the request of the standing committee on public safety and national security. His decision to release the video was complicated by various concerns, he said, and the investigation into the attack of Oct. 22 remained active, but on one thing the RCMP was certain: The man in this video, were he not dead, could be reasonably charged with committing acts of terrorism.

“Let me also say that if Zehaf-Bibeau had not been killed, but, rather, taken into custody, we would have charged him with terrorist offences,” Paulson told the committee. “The Criminal Code provides the definition for terrorist activity at Section 83.01 (1) (b). The RCMP believes, on the evidence, that Zehaf-Bibeau was a terrorist.”

This is likely no small point, particularly in the context of recent partisan debate about the events of Oct. 22. That it is a live debate is almost entirely down to the fact that NDP Leader Thomas Mulcair has been reluctant to apply the “t” word to Zehaf-Bibeau’s actions.

It was indeed perhaps with Mulcair’s reticence in mind that the Conservative side of the committee proceeded to reconfirm, then re-reconfirm again the commissioner’s view.

“Could you just confirm that that definition applies very clearly to what we witnessed here on Oct. 22?” Roxanne James, the parliamentary secretary for public safety, asked at the outset after reading aloud the relevant section of the Criminal Code.

“Based on the information that we saw in the video, would you agree that Mr. Bibeau clearly identifies or affiliates himself with known terrorist organizations?” Conservative MP Ted Falk asked awhile later, “and what he’s about to do is clearly a terrorist act and he identifies that?”

Falk then told the committee he would “envision it as an act of terror, as well.”

So there, Mulcair. But so what? Should we be angrier or more fearful for how Zehaf-Bibeau was motivated? Should we expect a certain degree of response from our government that we might not if Zehaf-Bibeau had merely been motivated by voices in his head or some smaller dispute with society?

In this regard, it is tempting to want to quantify the threat. As Paulson explained, the national “threat level” is currently set at “medium,” whatever we are to understand from that. More specifically, the commissioner said, the “tempo, pace and volume of counter-terrorism investigations” has increased over the past year. “It is a growing threat,” Paulson said. “People don’t need to be afraid. People need to be engaged. People need to be aware.” Among this country’s allies, he said, it is present to a degree that is “challenging us all.”

Indeed, at the conclusion of this morning’s hearing, committee chair Daryl Kramp ventured that MPs were facing “what many, many people consider, maybe potentially, one of the challenges of our generation.”

Here we might be churlish or naive and wonder whether the same could be said of climate change or poverty or disease or inadequate governance, even if only to wonder whether public vigilance is reasonably proportioned. But that this is a significant challenge is undeniable. And that challenge is manifest now for this place in Bill C-51, the Anti-Terrorism Act, 2015.

An hour after the commissioner’s testimony had concluded, Public Safety Minister Steven Blaney issued a statement of his own. “Terrorist groups have threatened attacks in Canada for a long time, including prior to our mission against ISIL [Islamic State]. This video is a stark reminder of how Canadians must remain vigilant against the real threat of terrorism at home and abroad,” he said. “The first duty of any government is to keep its citizens safe. That is why we introduced the Anti-terrorism Act, 2015—to ensure police and our national security agencies have the tools they need to keep Canadians safe.”

It is inconvenient for Blaney and his bill that no one has yet identified even a single part of it that would have done anything to prevent Zehaf-Bibeau’s assault on Ottawa; pressed on this point by a reporter afterwards, Paulson said he didn’t want to “use this incident specifically to sort of justify” C-51, referring only to an issue with peace bonds (that would seem to be relevant to the attack in Saint-Jean-Sur-Richelieu). It is, in fact, the government’s position that it would “not be appropriate to speculate” as to whether C-51 would have changed anything about October 22. So, no matter how often Zehaf-Bibeau and his actions are referenced in the general vicinity of the legislation, the link is tenuous. At best it is this: Zehaf-Bibeau demonstrated that bad things can happen, and C-51 is a bill that might make it easier to prevent other bad things from happening. But then, of course, the inverse is also true: No matter how quickly and how unamended C-51 is passed, we won’t necessarily be any better protected from another Michael Zehaf-Bibeau.

How, then, to understand Zehaf-Bibeau and this challenge?

In the context of C-51, how we define terrorism is important; the language of this legislation is broad. But, beyond legality, it matters what we understand terrorism to be. Most particularly, it matters how grave a problem we imagine it to be and how deeply we fear it, for those fears surely make us more willing to accept greater powers for the state and new limits on civil liberties. The scarier the threat, the easier it is to justify the sacrifices. And we should be loathe to make any sacrifice.

Roxanne James, recalling how she was in that room on Oct. 22, admitted to being “a little bit shaken” by the video, and the NDP’s Randall Garrison said viewing it was “quite chilling.” The scariest thing about those 55 seconds of Michael Zehaf-Bibeau was how unlike a madman he appeared to be: Save for the words he spoke, this was not obviously a man about to run pell-mell on our Parliament. This is perhaps what is meant by the banality of evil.

What is required now is to look this man in the eye and not lose our wits.