The former MP died of brain cancer at the age of 56. In his last months, he offered a message of hope to Canadians.

By Maclean's and The Canadian Press February 6, 2019 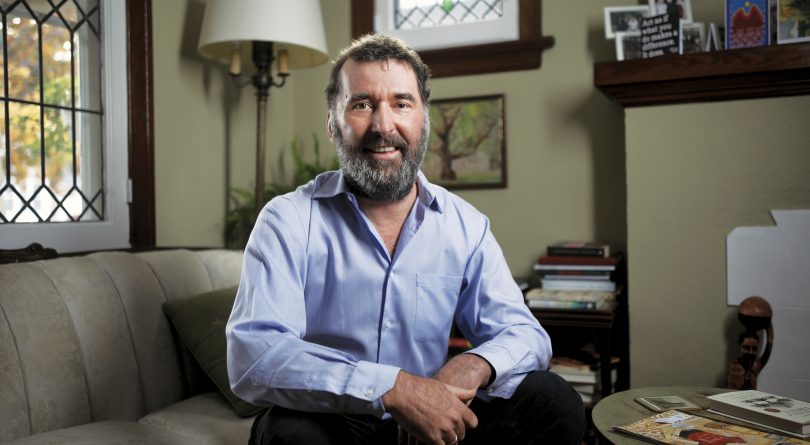 Paul Dewar, a teacher and union leader from Ottawa who became the New Democratic Party’s foreign-affairs critic, died Wednesday after contending with brain cancer for a year. He was 56.

On Nov. 6, 2018, Maclean’s presented Dewar with a lifetime achievement award at the annual parliamentarians of the year gala. This was his message to MPs, many of whom served with him in the House of Commons. Here’s an excerpt:

Remember we are all in this together, and we are stronger than any of us is alone. When we are given our mandate today for making a better tomorrow, imagine what would happen if we took our inspiration from each other, not by taking down another Member of Parliament’s personality; rather, we lift ourselves up by supporting ideas for a better future. Please embrace the beauty that exists within all of us, and let that be your guide.

Great minds discuss ideas; average minds discuss events; and small minds, people. And that’s a mentor of mine in history, and that’s Eleanor Roosevelt. You are all good people. Remember why you’re here. Collaborate, and hopefully continue the conversations you’ve had tonight. 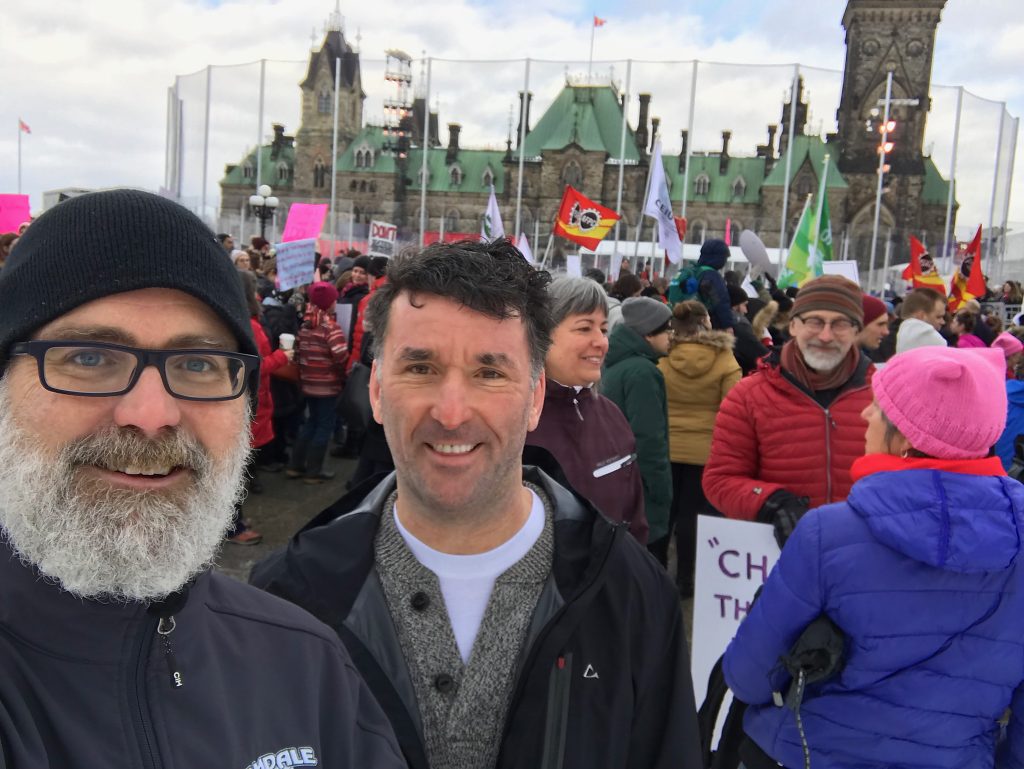 Jeff Leiper (left) and Paul Dewar (right) at the 2018 Women’s March in Ottawa.

In March 2018, upon learning of Dewar’s cancer diagnosis, Ottawa city councillor Jeff Leiper wrote a letter as part of our Before You Go series, which collects unique, heartfelt letters from Canadians taking the time to say “Thanks, I love you,” because we shouldn’t have to wait until it’s too late to tell loved ones how we really feel. Here’s an excerpt:

When you became our member of Parliament in 2006, my near-downtown Hintonburg neighbourhood in Ottawa was experiencing challenges around drug houses and street prostitution. We needed allies. Though we live almost in the shadow of the Peace Tower, Parliament Hill seemed a world away. But the tone of our relationship with federal politics became more intimate and collaborative with you as our MP.

Your gift, Paul, is that you can put a room at ease. You can instantly bring to a meeting—of three people or 300—a sense of confidence, competence, collaboration and co-operation. With you, the barrier between the politician and the public disappears; you’re one of us, leading from beside us rather than out in front. In your jeans and with sleeves rolled up, you get to work with humility and humour. That’s got to be the teacher in you, but it’s also a testament to your true nature.

Over the years I’ve gotten to know you, you’ve become a model for me of authenticity in politics: a fellow fan of Bruce Springsteen, CFL ball and the outdoors, with a love of all things nerd and laser-focused on social justice. I always got the sense that you were comfortable in our neighbourhood. Like a pair of well-worn jeans, Hintonburg fits you.

Shortly after news of Dewar’s death was announced, the Canadian Press published this obituary:

Despite struggling with dyslexia as a child, getting trounced by Ed Broadbent during his initial foray into politics, losing his seat in the House of Commons in the Liberal wave of 2015 and being diagnosed with a terminal illness, the 56-year-old was infused with a positive, hopeful attitude and belief that the world could be made a better place.

So it was startling when Dewar revealed in June 2018 that as he was recovering from brain surgery several months before, he saw news of the high-school shooting in Parkland, Fla., that killed 17 people—and that he “abandoned any hope” and was ready to give up.

Except giving up was never really in Dewar’s vocabulary.

Inspired as Parkland students channelled their loss and pain into a rallying cry against gun violence in the U.S., Dewar decided to use what time he had left in life to launch a new initiative, Youth Action Now, and empower a new generation of leaders who will work for the greater good.

Dewar is survived by his wife Julia Sneyd and their two sons, Nathaniel and Jordan.

He is perhaps best known for having served as the MP for Ottawa Centre from 2006 to 2015, much of which he also spent as the NDP’s foreign-affairs critic, following an early career as an elementary-school teacher and union executive.

Whether it was the war in Afghanistan, free-trade deals or the defence of human rights and democracy in developing countries, Dewar was fierce in his convictions but also willing to listen to differing viewpoints to try to find a consensus.

That combination of principle and pragmatism, combined with the aforementioned optimism, earned Dewar respect on both the government and opposition benches, and helped the NDP shed some of its image of being idealistic and naive on Canada’s dealings with the rest of the world.

Dewar’s path into politics meant following in some pretty big footsteps. His mother, Marion Dewar, was not only one of Ottawa’s most beloved mayors but also a heavyweight in the federal NDP and social-activist circles in the 1970s and ’80s.
Dewar would often say that he learned about politics from his mother, telling the Ottawa Citizen in September 2011 that while Marion warned against running for office just to get power, “power isn’t a bad thing, it’s how people use it.”

Then there was Ed Broadbent, the legendary former NDP leader whose short-lived political comeback started by trouncing

Dewar during the latter’s first nomination battle in 2004. Dewar had been campaigning for the nomination when Broadbent decided he wanted back in.

It was only after Broadbent’s difficult decision two years later to leave politics once again to care for his sick wife that Dewar was elected to replace the former leader as the MP for Ottawa Centre.

Yet it didn’t take long for Dewar to come into his own and make his mark with a respectful and pragmatic approach to politics—and his determination to fight injustice and cynicism at home and abroad.

Many might not realize that Dewar was dyslexic. Dewar credited the disability, which makes it harder to read, write and sometimes speak, with having made him more resilient as well as a better teacher and politician.

“I certainly identify strongly with people who are needing help in taking on things, be it with learning challenges, life challenges in general,” he told The Canadian Press in November 2011. “It’s about empathizing and understanding.”

He faced other challenges as well: Dewar placed a distant fifth when he ran to replace Jack Layton as NDP leader in 2012. Many were shocked when Liberal Catherine McKenna defeated him in 2015. He was one of several apparently popular New Democrats swept out of urban ridings that year.

The party kept him on as an adviser, helping the handful of new MPs the party elected adjust to their new duties. Afterward, he joined the board of Human Rights Watch and contemplated running for mayor of Ottawa.

Then came the diagnosis in February 2018 that he had Grade 4 glioblastoma, the same type of brain cancer that killed Tragically Hip singer Gord Downie. Dewar had gone to the hospital when he felt numbness in his arm that didn’t go away—a bother he’d at first put down to being tired from a 36-kilometre skate on the frozen Rideau Canal. That’s five full lengths of the skateway that runs not far from his downtown Ottawa home.

He soon had surgery to remove a tumour on his brain but the cancer couldn’t be cured, only held at bay for a while.
Yet even then, his optimism continued to shine. If people wanted to do something for him, he said, they should contribute to their neighbourhoods. Smile, laugh, give. “Knock on your neighbour’s door and say hi.”

“What I have discerned is that notwithstanding the urgency to live as much life as possible, I see this path I am walking as a gift to realize the beauty of life itself,” Dewar wrote in an open letter announcing his plan to launch Youth Action Now a few months later.

“Each one of us is capable of contributing something to make a difference with our family, friends and in our community. Sometimes cynicism, isolation and fear hold us back from truly contributing and participating in making the world around us a better place.” 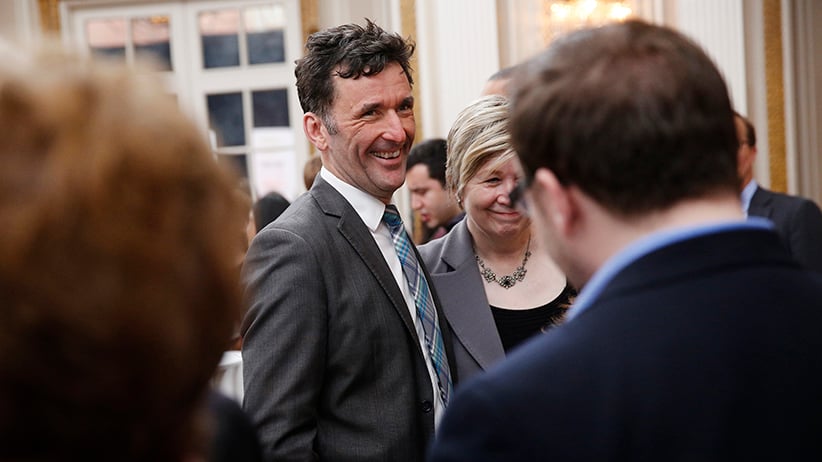