'A kick in the teeth,' PC supporters respond to Hudak's resignation

A sombre mood as the Ontario PC leader steps down 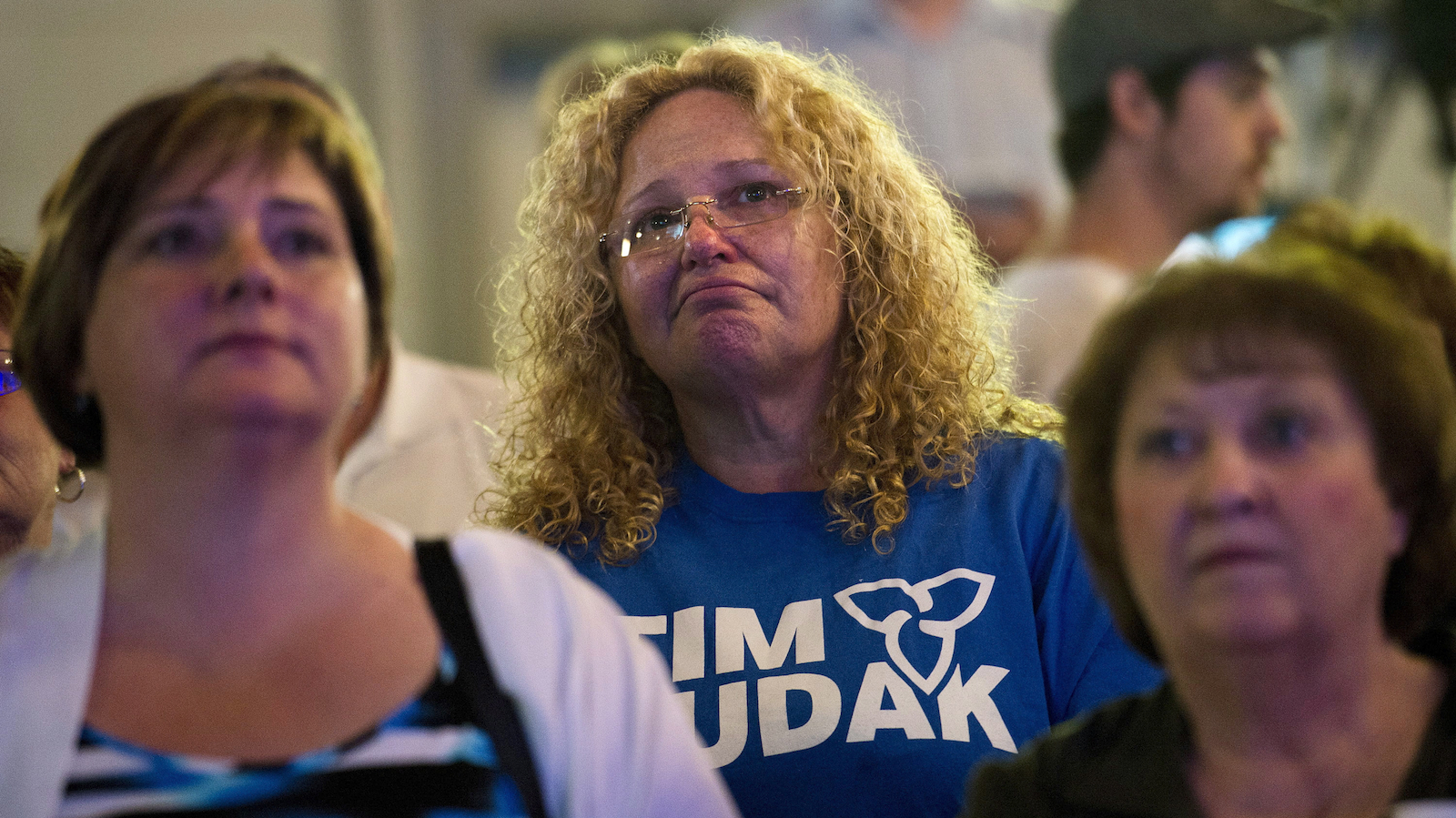 Shellie Correia lives in West Lincoln, Ont., and volunteered for Progressive Conservative Leader Tim Hudak’s campaign in Niagara West-Glanbrook, saying only he listened to her complaints about wind turbines that affected her son. She says she’s grown to know Hudak and his family, and says that when Hudak tells her a story, she gets the sense that “it’s not just because it’s what you want to hear. He means it.”

But as PC riding after PC riding in Ontario fell on Thursday night, and hope after hope faded, even she was unwilling to make a prediction on the leader’s future with the party.

“I have no idea,” she said, after a long pause, tears staining her face. “We need him to be leading this province and he should. And I have no idea.”

Correia will not get her wish. For the second election in a row, Ontario voters have refused to give Hudak and his PCs the government. As the results became clear, Hudak announced he will not lead the Ontario Progressive Conservatives.

“I am optimistic about our party’s future. But I will not be leading the PC party in the next election,” said Hudak, to moans from the crowd.

“It’s like a kick in the teeth. I’m still reeling from the shock,” Correia said after Hudak’s announcement. “I can’t believe people have elected them again, after all the scandals, the lies, the deficit.”

Hours earlier, the future for the PC party seemed so promising in sunny Grimsby, Ont., Hudak’s home base. In the days leading up to the election, there was an internal belief among PC staffers that they were on track to form a minority government. At the very least, polls indicated that it was going to be a close, down-to-the-wire night of results. Staffers said that the PCs’ turnout drive had gone well—a key to success for the party.

But the bad news came early, not too long after the last strains of the sun faded from the dusky sky. By 9:30 p.m., less than an hour after polls closed, TV stations were projecting a Liberal victory.

“We’re not giving up,” said Mike Sansano, a Grimsby resident, as the first news of a potential Liberal victory rolled in.

But the hits just kept on coming, and the crowd never really gathered into a throng. If there was a single PC victory announced on the screens in the Mountain Ridge Community Centre, you wouldn’t have known it from listening: There were no cheers, even when the screen showed a candidate leading. There was awed mumbling as it was announced that popular MPP Doug Holyday, Toronto’s former deputy mayor, had lost his seat. When it was announced that Hudak won back his own riding, the crowd remained silent, save for a single whoop.

By the time CTV announced a Liberal majority, there were groans, and clenched teeth, but little more.

As for the whys and wherefores? Immediately, in Grimsby, the response was a rural-urban divide.

“There are two Ontarios,” said Sansano. “They control the GTA, and the rural voice isn’t heard.”

The reasons for the Progressive Conservatives’ shocking rebuke will be analyzed in the days to come and the guesses on who will replace Hudak are already beginning.

Staffers—teary-eyed and shocked by the result—spoke of a man they genuinely believed in as a leader. It took some emotional mustering, but they applauded him gamely as he walked to the stage to The Heavy’s bluesy, drum-driven “What Makes A Good Man,” but despite what transpired, the crowd didn’t seem to even need the reminder. Hudak’s supporters didn’t clear the room quickly; they lingered well after his announcement, staying even after the music turned off, ending a party that never even began.