Pierre Poilievre doubles down on crypto

Politics Insider for Mar. 29, 2022: Ontario strikes a child-care deal; Randy Hillier surrenders to police; the polls are in on the Liberal-NDP deal 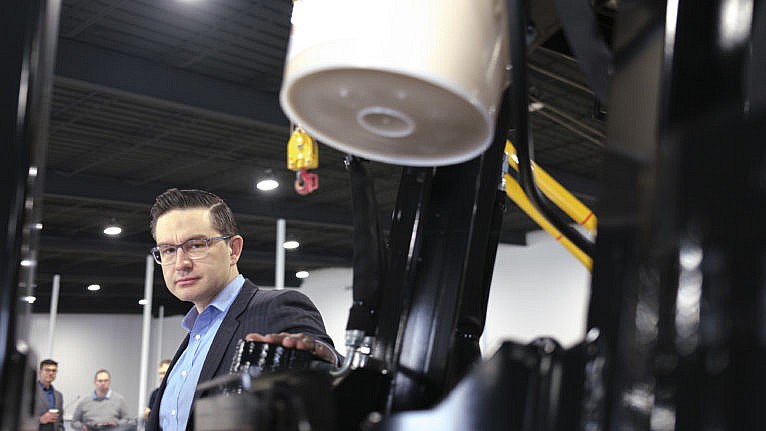 Poilievre glances at the camera briefly while getting a tour of machinery in Regina March 4, 2022. (Michael Bell/The Canadian Press)

Pierre Poilievre, who is drawing big crowds, said Monday he would seek to normalize cryptocurrencies to “decentralize” the economy and reduce the influence of central bankers, CBC reports.

Speaking at a shawarma shop in London, Ont. that accepts bitcoin as payment, Poilievre blamed the Bank of Canada for creating “$400 billion in cash out of thin air,” which he blames for inflation hitting a 30-year high: “Government is ruining the Canadian dollar, so Canadians should have the freedom to use other money, such as bitcoin. Canada needs less financial control for politicians and bankers and more financial freedom for the people. That includes freedom to own and use crypto, tokens, smart contracts and decentralized finance.”

Poilievre is an enthusiastic supporter of unregulated, volatile crypto currencies.

In February, Poilievre appeared on a cryptocurrency podcast hosted by a bitcoin trader who has promoted COVID-19 conspiracies and has compared central banking policies to slavery and Nazi Germany. Poilievre told the show’s host, Robert Breedlove, that he and his wife occasionally watch his cryptocurrency YouTube channel “late into the night.”

A deal at last: Doug Ford and Justin Trudeau were in Brampton Monday to announce a $13.2-billion child care deal to bring $10-a-day child care by September 2025.

Ontario was the only jurisdiction in Canada that had not signed onto the federal government’s plan, which aims to reduce child-care fees to an average of $10 a day by 2026. A news release issued Monday by the Ontario Ministry of Education said the deal includes “flexibility to allocate federal funding in a way that will allow the province to deliver an average of $10 a day child care, including by spending the initial $10.2 billion over four years instead of five.” Ontario had been holding out for more money, with Ford maintaining $10.2 billion would not be enough to provide $10-a-day child care for families across the province.

Jets picked: Procurement Minister Filomena Tassi and Defence Minister Anita Anand announced Monday that the government has selected F-35 fighter jets as its preferred bidder in a $19-billion search for a new warplane, the Globe reports. Ottawa will start negotiating solely with Lockheed Martin on a contract.

Prime Minister Justin Trudeau’s government is expected to hold up the selection of the F-35 as evidence that it is spending more on defence. However, this is a replacement of an existing asset in the Canadian Forces, not an expanded commitment to military spending.

CP’s  Lee Berthiaume considers some of the questions left unanswered by the announcement.

Busted: MPP Randy Hillier surrendered to Ottawa police on Monday to face nine charges related to his involvement in the convoy protest, CP reports:  “Differing and dissenting views are now apparently criminal, so that is a disturbing trend.”

The OPP laid nine charges, including two counts of obstructing or resisting a public officer, one count of assaulting a peace or public officer and three counts of counselling an uncommitted indictable office, two of which are considered mischief.

Questioned: Jason Kenney said Monday he has been interviewed by RCMP as part of an investigation into potential criminal identity fraud in the 2017 United Conservative Party leadership contest, CP reports: “I did an interview at (their) request, once. As I’ve said from the very beginning … we’d always be happy to answer questions. At the end of the day, my campaign did everything it could to carefully follow all of the rules, and I’m confident we did so.”

Last week, CBC reported two insiders alleged in court affidavits that Kenney was in the room when the illegal Callaway donations were discussed. The allegations have not been proven in court. Kenney, asked Monday if he was aware of illegal disbursements, reiterated earlier denials. “No, absolutely not,” he said.

Defends meme: Kenney defended a meme he shared Monday using the controversy from the Oscars on Sunday, showing actor Will Smith striking award presenter Chris Rock, the Calgary Herald reports. The image is captioned with the words “Green Energy Policy” over Rock and “Reality” over Smith: “This is a meme that’s taken over the internet. It’s a creative way of making a point.”

In favour: The deal is a rare example of a politician favouring results over politics, Lawrence Martin writes in the Globe about Jagmeet Singh.

He appears to realize his party does not have a reasonable chance at forming government and that his primary role, therefore, is moving those in power as close as he can to his NDP priorities. That said, his arrangement with Mr. Trudeau is less than meets the eye. The two parties were already aligned on many of the issues in the agreement. Mr. Singh didn’t nail down Mr. Trudeau with enough specifics on dental care, pharmacare and issues such as climate change. Much of the document is aspirational. Given his big gift to Mr. Trudeau, he could have exacted bigger concessions.

Grumpy Grits: Not everyone in the Liberal party is happy about the deal, though. In the Hill Times, Abbas Rana talks to some unnamed MPs who don’t like how it was handled.

“There’s the irony that this was kept from members of caucus until it actually was a fait accompli,” said a second MP. “And the irony here is, even though if the details of that nature were kept from our caucus, NDP MPs actually got to have a say on it. So that juxtaposition, in my opinion, is very, very troubling. But that’s how our government has been behaving since 2015.”