One of question period's leading characters on the value of conflict 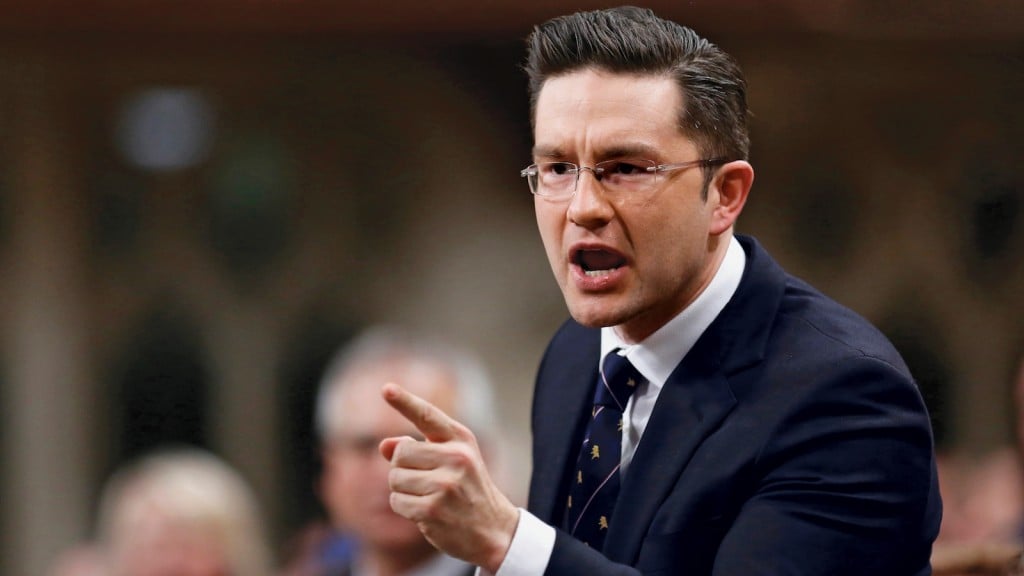 When I was talking to people for this piece on partisanship in the House of Commons, I spoke with Pierre Poilievre, the minister of democratic reform and a character rather well-noted for his performances in the crucible for question period. I didn’t include any of our conversation in the piece, but here is a transcript.

Q. Is there any way to determine when partisanship goes from being a functional part of our Parliament to a detriment to our Parliament?

A. I think it’s a detriment if it detracts from good policy and/or the business of governing. So, for example, if a politician takes a deliberately bad and damaging policy decision strictly and demonstrably for a partisan purpose, voters punish [him or her] accordingly. But, aside from that, I think it’s just part of the regular discourse.

Q. We’ve talked about this in the past. You’re a guy who’s associated with question period and the battle of question period, and you are kind of happy with the role you play, but do you ever worry that there’s too much partisanship, or that the rancour has gotten a bit over the top?

A. No, not at all, and I don’t think Canadians do, either. I think the average Canadian couldn’t care less if some politician’s feelings are hurt because of an unkind word. I think everyday people expect politicians to be able to withstand very tough criticism. There’s a public interest in having the weaknesses of a politician’s policy positions and judgments exposed for all eyes to see. That’s one of the greatest things about a democracy, and it’s one of the characteristics that most distinguishes it from a dictatorship. There’s certainly no partisanship in most totalitarian dictatorships. The political debate, I’m sure, is very polite, actually, in those places.

A. That’s right, exactly, but there’s certainly no partisan disagreement, I should say. And so I don’t want to become one of those places, and I don’t think we risk that, but what I’m saying is that I think it’s the job of public officials to be able to explain themselves and their positions and the robust debate in Parliament allows for that to happen.

Q. You don’t ever think that people are turned off by the bickering and the shouting back and forth, and you know the way question period is, and attack ads and constant disagreement—constant and loud disagreement.

A. I think that people are more concerned with the result, like when I go into my community, they want to know when is that bridge going to be finished, why are my hydro rates so expensive, what’s your plan to reduce my commute time. Those things matter to people in their lives. Frankly, they’re not so much captivated by whether or not politicians are friendly with each other.

Q. What about the idea that it turns people off politics?

A. I don’t think it does. I just think that, at the end of the day—first of all, I think that I should point out that our party is the least partisan of the three.

Q. There are people who quibble with you on that.

A. They might, but I think it’s demonstrably true, and I think if anyone did a quantitative analysis of question period, they would find that to be so. And I think to the extent that our party does criticize its competitors, it is mostly fair game. And you look at our main criticism of our opponents, [which] is that they cost too much and they would raise taxes on Canadian families. They can quibble with that, too, but the reality is that voters should be able to judge that criticism before they cast their ballots, rather than waking up to a big tax increase after the election is over. That’s just one example of how the public is served by having a robust back-and-forth on the floor of the House of Commons.

I know all the other people you’ll interview will claim that they are non-partisan, and I encourage anyone to look at their actual record. Look at the questions that are asked on the floor of the House of Commons and judge whether or not these people who decry partisanship at 4 p.m. are equally non-partisan at 3 p.m.

Q. But let’s take a very small example. Members’ statements, those 15 minutes before question period, seem possibly to have been, at some point, not as much of a forum for attacks on each other. Could there be fewer attacks going back and forth, less rancour?

A. I think the defining question is this: Are the words focused on the concrete interests of the Canadian people? It doesn’t really matter whether or not the words are agreeable; it matters if they’re relevant to people’s lives. So, for example, if a member of our caucus stands up and points out that the Opposition is going to raise taxes and hit families with higher costs, some might call that negative, [but] I call it very relevant. But if somebody gets up and attacks a colleague’s personal life or a private matter, then I don’t think Canadians will react well to that. And that, I think, is the dividing line. If it’s relevant to the interests of everyday people, then voters expect that it should be robustly and aggressively debated on the floor of the House of Commons. If it’s gratuitously personal, having nothing to do with the public interest, then people react very badly to it.

Q. I think there’s always going to be a debate about the content, where partisanship goes, but could there be fewer attacks and less back and forth? Also, do you think there should be more co-operation between the parties, between MPs?

A. Yeah, and this is where I’ll be critical of the media, because there are instances where the parties do actually work together, and there’s no interest from the media in even covering it, so no one finds out and it becomes the old “when a tree falls in the forest” problem. I had a unanimous legislative change passed through the human resources committee to extend Employment Insurance parental leave to returning soldiers, and there wasn’t a single journalist in the room to cover it. It was a very touching story: We had a soldier testifying from Kabul, who saw his wife through the intercom for the first time in six months. She was testifying in person; a great, beautiful story, but no one was interested because there was no fight. We hear from journalists all the time, “Why don’t you guys be less partisan?” Well, we are, it’s just you’re never around to see it.

Q. Yeah, that’s fair. I do wonder how often it happens, [or whether] it’s obscured because we aren’t able to see it. But I take your point.

A. I know there’s lots of quiet back and forth that happens between representatives that improves the quality of the bill. I remember Pat Martin made a lot of very good suggestions during the Accountability Act process back in 2006, and many of his thoughts actually became law. And I’ve seen in instances over the course of 10 years here where that has happened. But it just really doesn’t get a lot of air time when it does.

Q. Irwin Cotler has pitched the idea of a Speak No Evil day that would be dedicated to civil discourse. Any interest in such a thing?

A. Well, I certainly agree we need to be civil, but that we can disagree civilly at the same time. I think the great thing about Parliament is you bring together an extremely diverse group of people who have differing points of view, and all of those views clash on the floor of the House of Commons and only the best ones survive in the long run. That’s the genius of the Westminster parliamentary system. We don’t have a congressional system formed into a half circle. We do actually have two sides and they are called the Opposition; they’re not called the minority party like in Washington. I think that the fact that parties bring their ideas and they clash every day is not necessarily pretty, but, in the end, the best ideas rise to the top and, to cite Churchill’s much overused quote, it’s the worst system of government except all the rest.

Q. I guess this comes down, to a certain degree, to a definition of what everyone thinks is civil.

A. I think so, but where I draw the line is, is the person uttering the words that are relevant to the public interest? Or is it just a gratuitous personal attack? And there is a difference between that. If somebody wants to make an allegation about somebody else’s tax plan, that’s one thing. They want to attack them for some irrelevant personal characteristic, that’s another question entirely. So I really think that it comes down to whether or not you’re addressing a matter of public interest.

Q. Right, and you can go down a rabbit hole on this discussion, but take the example of Liberal Leader Justin Trudeau and the mosque. That might be seen by some people as a completely gratuitous and irrelevant attack.

A. I don’t have any of the details on that story, so I don’t want to comment on it in particular. But I think, on the whole, that our criticisms of Justin Trudeau have been very fair. He is one of the most partisan members of the House of Commons, no question about it*. So, look, if Justin Trudeau is going to mean higher taxes for somebody’s family, that family should know about it before they get into the ballot box and cast a ballot. If he is going to repeal some of our anti-terrorism legislation, I think we have a duty to inform people of that before they vote on the question. He wants to be prime minister of Canada; that takes a lot of judgment, a lot of good management and wisdom. We have the obligation to point out when his judgment is demonstrably bad, as it has so often been. There’s actually a public interest in doing that, because he proposes himself for an office that requires judgment. So I think these criticisms that he has faced are very fair and very reasonable, and not out of line, by the way, with what other politicians face on a daily basis.

*When I followed up, the minister’s office pointed to three examples to substantiate this assertion: Trudeau calling Peter Kent a “piece of s–t”; Trudeau tweeting a link to Vikileaks; and Trudeau’s focus on the Prime Minister’s leadership in opposing the government’s decision to commit to a combat mission against ISIS [Islamic State] in Iraq. Alleges Poilievre’s office of Trudeau: “Most recently, ‎he seemed to support the international community’s military action against ISIS, but opposed it for Canada. His only rationale for the contradiction was his personal opposition to the Prime Minister’s leadership. In other words, he cannot even put aside personal and partisan disputes when it comes to fighting ISIS, even when he recognizes it as a threat and other Liberals supported military action out of Responsibility to Protect, not just from the international community but from Canada, as well.” (It’s not clear to me whether Trudeau offered support for the idea of our allies participating in air strikes previously, but he seems to have now in a recent interview with the Huffington Post.)