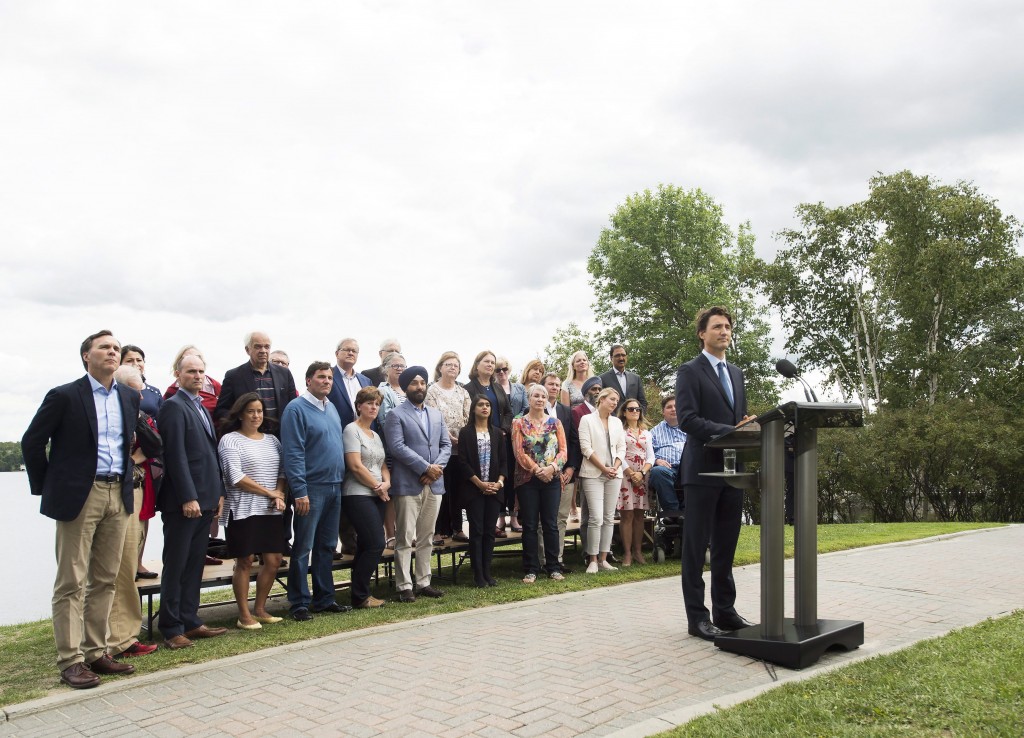 Prime Minister Justin Trudeau speaks to the media at the Liberal cabinet retreat in Sudbury, Ont., on Monday, August 22, 2016. THE CANADIAN PRESS/Nathan Denette

SUDBURY, Ont. — Justin Trudeau is acknowledging that his government faces a tough year ahead full of hard choices that won’t please everyone.

And he already seems to be trying to dampen expectations, at least when it comes to one of his most ambitious promises: to establish a new nation-to-nation relationship with Canada’s indigenous people.

The prime minister wrapped up a two-day cabinet retreat Monday, praising his government’s accomplishments thus far but conceding there’s more work ahead of it than behind.

“There are going to be difficult decisions and challenges ahead of us on everything from natural resources to investments to trade deals,” Trudeau told a closing news conference, his ministers arrayed behind him on the bank of a picturesque northern Ontario lake.

Trudeau’s comment echoed a warning issued at the retreat Sunday by Sir Michael Barber, a British guru on “deliverology” — the art of ensuring governments deliver on their promises — who’s been advising the Liberal administration.

Having spent the first 10 months of their mandate enjoying a prolonged honeymoon and consulting with Canadians on dozens of different issues, Barber effectively told ministers it’s time to fish or cut bait.

“If you want to generate results … then in Year 2 you really need a focus on relentless implementation, on taking some difficult decisions where you can’t please all of the people all the time,” Barber said outside the retreat.

Trudeau continued Monday to use soaring rhetoric to describe his ambition to fix the historic wrongs suffered by Canada’s Aboriginal Peoples and set the country on a new path of reconciliation.

Still, Trudeau took pains to warn that it will be “a long process … and a complex one.”

Tragically Hip frontman Gord Downie used the band’s last concert Saturday, watched by millions on television, to give a high-profile endorsement of Trudeau’s ability to get the job done.

While the prime minister said Downie’s “vote of confidence” was “extremely touching,” he again stressed that “we have an awful lot of work to do and it’s not going to happen overnight.”

Trudeau and his ministers were to wrap up their retreat later Monday with a community barbecue expected to attract as many as 2,000 people.

The retreat was held at Laurentian University, where the ministers bunked together in student dorms. Trudeau also stayed in the dorm but didn’t have to share a room.

“Being prime minister has its advantages. I think I got a floor monitor’s room,” he said.

“This was a great opportunity for collegiality. We had a bit of a floor party last night as we swapped what-I-did-on-my-summer-vacation stories.”