Politicians need to stop suing each other. It's bad for democracy.

Opinion: Being subject to criticism, including questions about one’s conduct, comes with politics, and lawsuits risk pre-empting probing inquiry 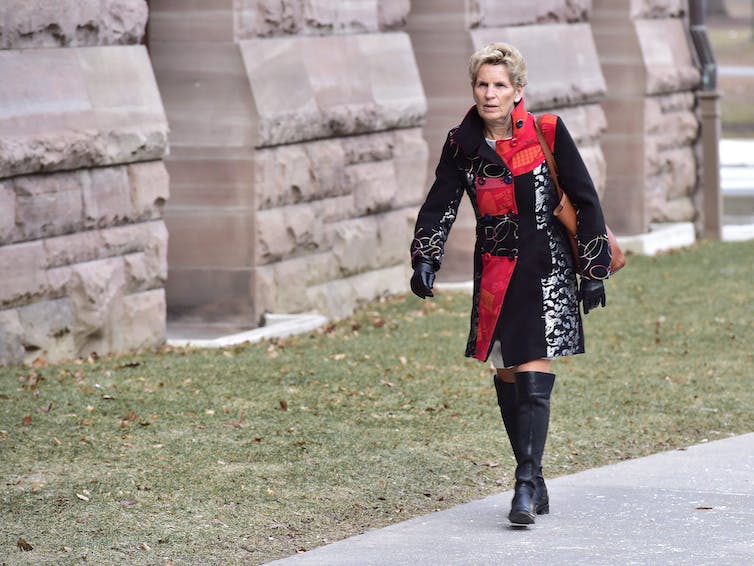 Ontario Premier Kathleen Wynne, seen here at the provincial legislature in January, is among politicians who have threatened to sue political foes. THE CANADIAN PRESS/Frank Gunn

Byron Sheldrick is an associate professor of political science at the University of Guelph’s College of Social & Applied Human Sciences.

Donald Trump’s reaction to last month’s publication of Michael Wolf’s book, The Fire and Fury, was to threaten to sue.

The U.S. president is well-known for his litigious inclinations, but this is by no means just an American or Trumpian phenomena.

Last fall, Kathleen Wynne, the premier of Ontario, filed a defamation lawsuit against Patrick Brown, then the leader of the opposition. Given Brown’s recent resignation, however, it would not be surprising to see the Wynne lawsuit dropped because the political motivations behind it will no longer exist.

Brown and the Progressive Conservative Party had also filed lawsuits against a group of dissent party members, a suit that was recently thrown out of court.

READ: Five things Kathleen Wynne is doing to save her political skin

Such lawsuits are relatively rare, but have been popping up on the Canadian political landscape. Wynne has previously engaged in the same strategy — before the 2014 election, while former Prime Minister Stephen Harper threatened to sue several Liberal MPs, and did sue the Liberal Party of Canada over allegations about his involvement in the infamous Chuck Cadman affair.

Lawsuits of this sort are a dangerous trend in our parliamentary democracy. Why?

Individuals should certainly be entitled to go to court to seek remedies if they’ve been aggrieved. At the same time, there is something unseemly about politicians responding to criticism through lawsuits.

As a politician, being subject to criticism and critique, including questions about one’s conduct, arguably goes with the job. Lawsuits therefore might pre-empt a probing inquiry into matters of public interest, and chill future questions and criticism.

When the defendant is another politician or political party, the lawsuit interferes with the vigorous debate and critique that is at the heart of our democratic system.

These lawsuits frequently end through a settlement rather than going to trial. However, those settlements often include a provision that the issue not be raised or spoken about, including the very terms of the settlement.

Transparency suffers when public debate is subordinated by a private agreement not to discuss the issue.

Parliamentary privilege, after all, precludes such lawsuits for a reason. Parliamentary rules make it clear that any statements made in Parliament or a provincial legislature cannot be the subject of a lawsuit. Parliament, it was believed, could not function properly as a forum of debate if members feared their comments might expose them to lawsuits.

A policy choice was made to prefer complete freedom of expression over an individual’s right to recourse to the courts. The same statements made outside the legislature, however, could be the subject of a lawsuit.

But parliamentary privilege no longer operates to ensure a space for free political debate.

The power of social media

The development of a modern mass media, and now social media, has transformed the relationship of elected officials to both Parliament and voters. Statements directed at the public through social media are arguably more significant and more important than statements made in Parliament itself. Our democratic institutions are no longer the primary vehicles for the articulation and debate of public ideas.

As a result, we need to develop a different and more effective framework to consider when political lawsuits are unacceptable. Parliamentary privilege, with its all-or-nothing approach, is out of sync with the reality of our political system.

As an expert in the intersection of law and politics, I argue that lawsuits between politicians should be considered within the framework of what’s known as strategic litigation against public participation, or SLAPP.

The term refers to lawsuits, usually brought by corporations, against protesters and activists with the aim of curtailing their political expression and engagement.

These lawsuits often allege defamation and aren’t usually launched with an intention to win. Rather, the intent is to starve protesters of resources, tie them up in court and send a message to others who might engage in such activities.

Many American states have legislation restricting SLAPPs, and in Canada, both Ontario and Québec have enacted anti-SLAPP legislation.

The aim of Ontario’s anti-SLAPP legislation is to protect the open discussion of issues of public importance while at the same time balancing the rights of plaintiffs to go to court.

Declare it a SLAPP

If a lawsuit relates to speech about a public issue, the defendant can make a motion to have the lawsuit declared a SLAPP. The onus then shifts to the plaintiff to demonstrate that their case is real, and that they would be likely to succeed if the case went to trial.

MORE: How a real estate developer’s efforts to silence a critic failed

There are also various cost measures, and procedural safeguards, to ensure that the case moves forward in an expeditious fashion. This minimizes the impact on free speech. If the court determines the case would be unlikely to succeed at trial, it can be dismissed.

This sort of framework should be applied to political lawsuits across Canada. It preserves the ability of injured parties to sue for damages, but also seeks to create the maximum space for our political system to operate without becoming mired in litigation.

The rationale for insulating politicians from defamation law was to ensure that issues are debated through our political and electoral processes, rather than in the courts.

It’s undoubtedly true that political discourse can become contentious, and may occasionally stray into the realm of what might be considered defamatory. But in my view, it’s generally preferable to err on the side of allowing free speech to operate rather than curtailing it through the potential of litigation.

At the same time, there will certainly be cases that are truly defamatory, and seeking a court remedy is both reasonable and desirable. The SLAPP framework, however, allows a workable and reasonable way to ensure that both democratic values and the rule of law can operate effectively side by side.