Politicians who learn from their mistakes can make Canada better

Our editorial: Scott Moe and Wab Kinew, two Prairie party leaders, have both publicly dealt with personal errors. But an honest effort to improve goes a long way. 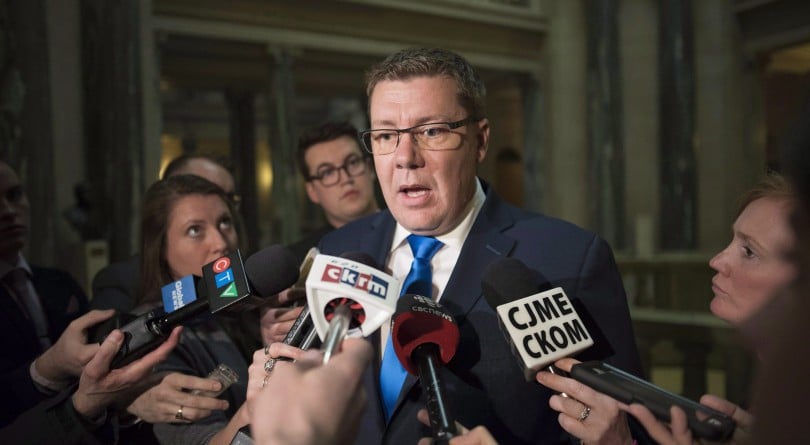 Saskatchewan Premier Scott Moe speaks to media after a meeting with Prime Minister Justin Trudeau at the Legislative Building in Regina on Friday, March 9, 2018. (Michael Bell/CP)

According to a poll released earlier this year, Scott Moe of Saskatchewan is currently tied for the title of Canada’s most popular premier. It has also been revealed that Moe made quite a few mistakes before getting into politics. It seems one does not preclude the other—and that sounds like good news to us.

Moe, who took over from Brad Wall in February, is tied with another rookie, Premier John Horgan of B.C., with an approval rating of 52 per cent, according to pollster Angus Reid. And while new leaders often enjoy a bump in popularity simply because they haven’t had time to disappoint their electorate, Moe’s honeymoon has endured despite revelations regarding past screw-ups and tragic errors.

During the 2016 provincial election, Moe admitted to a drunk driving charge from 1992. Last year we learned he’d been the driver in a fatal trafﬁc accident in 1997 and was subsequently charged with “driving without due care.” Last month it was further revealed that Moe, who has pledged to balance the province’s books by the end of 2019, declared bankruptcy in 2000 when his family farm failed. He’s not alone in his complicated past. Next door in Manitoba, new provincial NDP Leader Wab Kinew was convicted of drunk driving and assault in 2004 and faces accusations of domestic abuse dating back to 2003. As with all political scandals, voters will ultimately decide whether or not to forgive them. But what determines the quality of electoral mercy?

Canada is certainly no stranger to political scandals and comebacks, dating back to our first prime minister, Sir John A. Macdonald, and his twin weaknesses for bribery and imbibing. It is axiomatic that a swift and earnest apology is the first step in any politician’s quest for forgiveness. Speaking of his past, including his role in the fatal car accident, Moe said: “Not all of [my experiences] have been good, or things that I am in any way proud of.” Kinew recently told a CBC radio interviewer: “I accept responsibility for the fact I was not a good person for a time in my early 20s.”

But while an honest apology may be necessary, it’s not a sufficient condition for winning back the public’s favour. A trajectory of shame and redemption is also needed. Repeated sexting scandals doomed former New York congressman Anthony Weiner’s political life, for example, despite multiple apologies. And while former B.C. premier Gordon Campbell won forgiveness from voters for a drunk driving charge in 2003, they lost patience with him for breaking his word on a provincial sales tax; when Campbell resigned in 2010, his approval rating was below 10 per cent. On the other hand, U.S. President Donald Trump’s supporters seem unconcerned by scandal, despite his complete lack of shame and apology.

RELATED: Saskatchewan is launching a court reference that just might kill the carbon tax

Perhaps the actual mechanism at work involves the extent to which the public sees itself in their politicians and their failings. The swift disposal of former Ontario Progressive Conservative leader Patrick Brown following allegations of sexual impropriety may be explained, at least in part, by the fact that Brown had no appreciable experience outside the gilded dome of politics. As a career politician, the public saw nothing of themselves when they looked at him.

Beyond the calculus of public perceptions, we might also recognize some broader policy benefits from embracing the faults in our politicians. There is a strong argument, for example, that Moe’s bankruptcy has left him more sensitive to the province’s finances and the agricultural sector. Depending on weather and commodity prices, farms are often the most common type of bankruptcy recorded in the province. His drunk driving charge means he’s better informed than most on the fact that Saskatchewan has the highest rate of drinking and driving in Canada. Everyone can learn from their mistakes; politicians who face their errors with honesty and humility offer a benefit to us all.

Politics is the art of the possible, after all, not a search for perfection.