Newsletter preview for May 11, 2018: Innovation Minister Navdeep Bains was asked to remove his turban at Detroit Airport and the latest fashion craze involves Trudeau's face.

Once more, with feeling:

Northern issues are the stated subject of the second Ontario leaders’ debate, in mid-province-at-best Parry Sound (bring back the Shamrocks!) at 11:30 a.m.

The PCs are hosting an after-party at the local Royal Canadian Legion, before Doug Ford heads to Barrie. On Saturday, he rallies in Caledon.

Stephen Harper put his name to a page five New York Times ad clapping Donald Trump on the back for bailing on the Iran nuclear deal. He’s listed alongside a few former heads of government and foreign ministers. [CBC story]

In Washington, D.C. on NAFTA duty, Chrystia Freeland said he’s free to say as sees fit, but Canada isn’t too fond of the president’s call. This isn’t the first time Harper, now chair of the conservative parties-encompassing International Democrat Union (IDU), has contradicted the new powers in Ottawa on international events. The transplanted Torontonian wasn’t too hot on their trade deal renegotiation strategy, either.

You may recall Harper was prime minister when the administration of Barack Obama orchestrated the Iran accord. But what to do, sometimes you only think of the perfect comeback after the argument is over. (The ex-president, in fairness, has also taken exception to his successor’s stances on certain things).

Familiar faces, similar places, electoral races: Five former federal Tories are trying their luck under the banner of their provincial cousins this election. The group will be hoping for better outcomes than in 2015, when the Liberal breakthrough in Ontario ousted them from Ottawa. [iPolitics story]

Is that Jagmeet Singh’s music I hear? Kennedy Stewart confirmed yesterday he’s leaving Parliament Hill to run in Vancouver’s mayoral race. As for the possibility of the NDP leader running in to-be-vacated Burnaby South, his spokesperson told me that Singh—as he has for every by-election thus far—is “considering all options and open to counsel.”

The local Conservative and Liberal candidates both ran Stewart quite close in 2015, in a rare three-way departure from the typical Tory-NDP contest. Maybe don’t cue up “Differentology” just yet. [Tweet, YouTube music video] 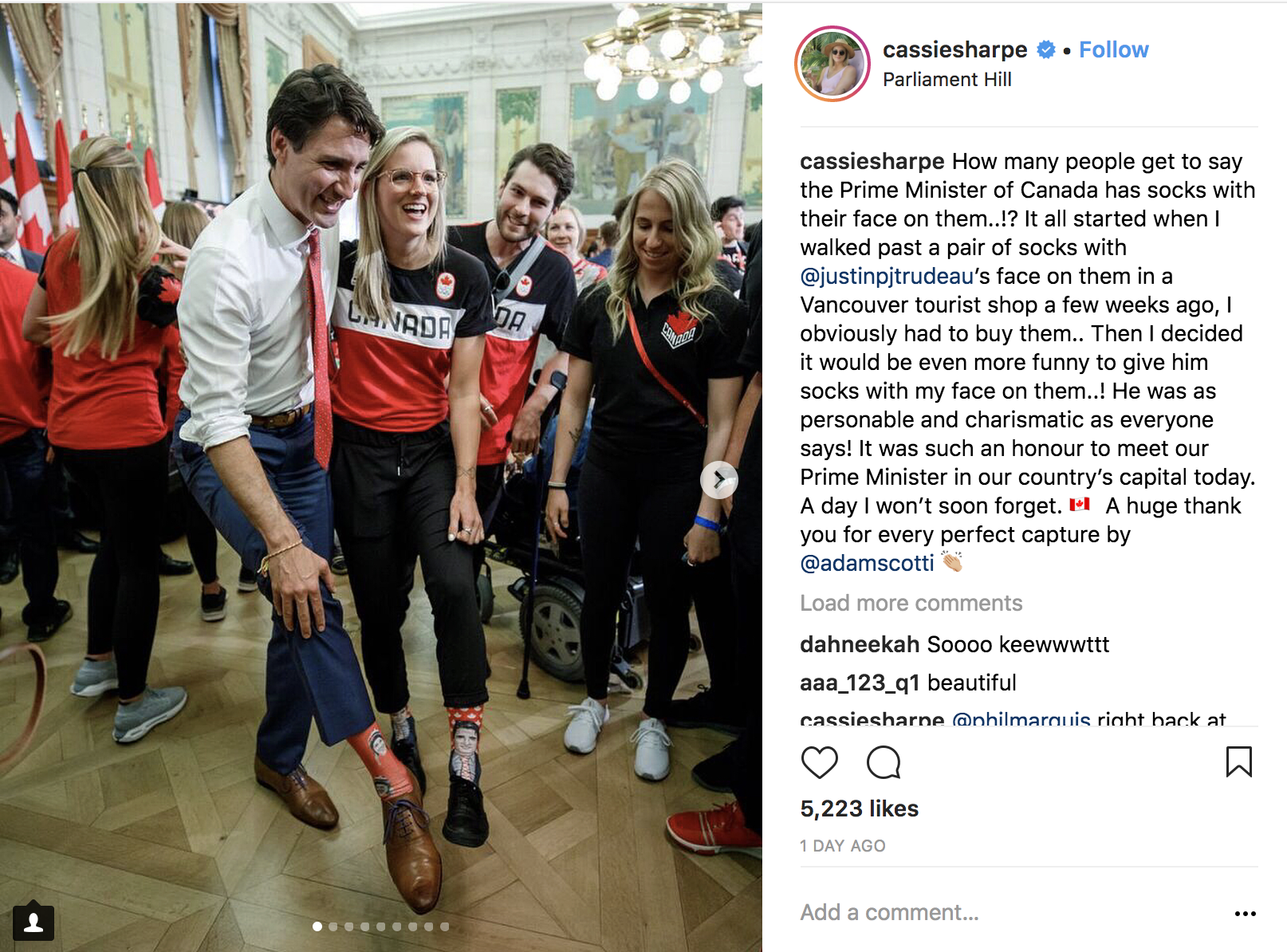 Professional skier Cassie Sharpe showing off her socks with Prime Minister Trudeau’s face on them. (Instagram/cassiesharpe)

Justin Trudeau is in Lac-Mégantic, Que., where he will announce a rail bypass that will divert trains around the downtown that was destroyed when tank cars carrying oil derailed in 2013. Construction will start next year. [CTV story]

Security agents at Detroit’s airport demanded that Innovation Minister Navdeep Bains remove his turban even after he passed a number of secondary tests in an April 2017 incident, La Presse reported yesterday. The Mississauga—Malton MP did not show his diplomatic passport until a guard tried to recall him to the screening area shortly before his flight. At that point, the rabid U.S. security state finally backed off. [La Presse story]

Accusations of workplace harassment against Elizabeth May were deemed without merit by an independent investigation commissioned by the Green Party. [Toronto Star story]

The epidemic, it’s spreading: During the Olympians’ Wednesday visit, skier Cassie Sharpe gave the Prime Minister some socks with her face on them, to match her own Trudeau-themed foot sheaves. Pity the PM. Whimsical socks are a Canadian man’s only way of showing personality; the PyeongChang champion at least has her halfpipe gold as well. [Instagram post]

Eleven years ago to this day, the director of the Financial Transactions and Reports Analysis Centre of Canada strolled into Wilfrid’s, the aptly named restaurant in the Chateau Laurier. He sat down for lunch with a fellow bureaucrat and, while spending a mere $92.08 according to government filings, carried out a “meeting to discuss FINTRAC matters.”

Just think. While enjoying Wilfrid’s lobster croque madame—with gruyère, ham, mornay sauce, and egg sunny-side up, all for $30—you may find yourself snooping on similarly scintillating small talk. Bon appétit!