Power half the time rather than power all the time

Will the Liberals be able to live with themselves if they lose the popular vote, but form government? History suggests they'll be fine. 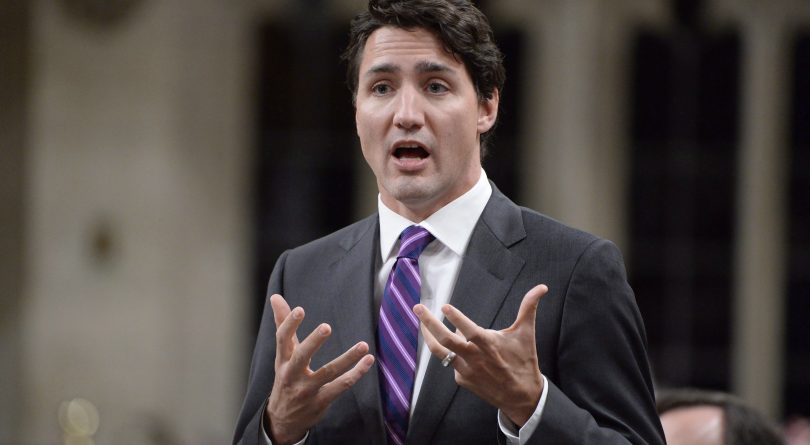 Trudeau is abandoning his long-held promise to change the way Canadians vote in federal elections. Trudeau makes it clear that electoral reform, once top of mind for the Liberal government, is no longer on the agenda in the House of Commons in Ottawa, on Jan. 31, 2017. (Adrian Wyld/CP)

In 2015, Justin Trudeau promised that Canada’s 42nd general election would be the last conducted under the first–past–the–post electoral system. Within two years, Trudeau had broken that promise as the Liberal government dropped its electoral reform efforts, citing a lack of consensus on an alternative system.

The government never sought a consensus. The closest we had to one favoured proportional representation (PR). But that didn’t help the Liberals. So, that was that; it was cynical stuff.

Common wisdom suggests that the Trudeau government preferred a ranked ballot, non-proportional system that would favour them—a system known as alternative vote (AV). There was little support for AV in Canada. When a special parliamentary committee struck by the government to study electoral reform reported back in favour holding a referendum on adopting PR, the Liberals issued a minority report against it and declared the matter closed.

MORE: The results of the next federal election—if electoral reform had happened

On Oct. 21, the country will return members of Parliament under our first-past-the-post system once more. The polls show a close race between the Liberals and the Conservatives. Trudeau risks reliving his father’s experience, going from a majority government to a minority in four years (1968 to 1972)—from Trudeaumania to Trudeau-meh-nia. He could even lose government altogether if Andrew Scheer and his Conservative Party can manage a good showing in Ontario and a good-enough showing in Quebec.

Still, the Liberals have a decent shot at forming government. They might even win a majority. However, in one scenario, they could win a plurality or majority of seats despite receiving fewer votes than another party—likely the Conservatives. There’s another possible scenario, the flip side of the first for them: they win the most votes across the country but take fewer seats than the Tories and fail to form government.

If either of those scenarios happen, expect to hear some crying foul. Parties form majority governments with less than 50 per cent of the vote all the time. It’s less common for them to form any sort government with fewer votes than a competitor. But it happens.

In 1979, Pierre Trudeau won 114 seats with 4.6 million votes. Joe Clark won 136 seats with 4.1 million votes and formed a minority government. It wasn’t the first time a national party had won the popular vote and failed to form government. In 1896, Liberal Wilfrid Laurier received fewer votes than the Conservative Charles Tupper (roughly 66,000 fewer), but Laurier won 117 seats to 86. Provincially, it happened in 1996 in British Columbia, which contributed to an electoral reform movement that has lasted decades and produced three referendums on changing the voting system. Expect a bump in support for electoral reform if that occurs later this month.

As frustrating as the capricious popular vote may be, in Canada’s parliamentary system, it doesn’t matter how many votes you get—it matters where you get them. The prime minister is the leader of the party who commands the confidence of members of Parliament in the House of Commons. The popular vote itself is meaningless. The distribution of seats is decisive.

There’s a debate to be had about whether the popular vote ought to matter. Majoritarians say it should—the majority rules. Those concerned with regional and minority representation push back that the country can only exist if we preserve balanced, local representation, which means that sometimes you’re going to get a popular vote that’s out of sync with seat count. The latter are correct. A strict majoritarian system wouldn’t work in Canada, a country of regional variation and diverse concerns alongside a few heavily populated provinces.

Proportional representation could have addressed this problem by distributing seats in a way that matched regional returns closely. A mixed–member proportional system could have introduced local members and proportional regional top-up seats that both respected diversity and the popular will. It could have, at the regional level, smoothed out some inequities in varied rates of representation by population. More to the point, with more parties in government or influencing government, a greater proportion of the popular vote would have contributed to parties shaping the policy and law.

What of the strategic questions? Do the Liberals regret their decision to abandon electoral reform? Will they be able to live with themselves if they lose the popular vote, but form government? Well, have you met them? They’ll be fine.

What if they end up hoisted on their own petard, ejected from government altogether, out of power and influence despite winning more votes than the party that takes power? Given the chance, knowing what they know now, would they do things differently? History suggests not.

Since Confederation, the Liberal Party has governed more often than not. Parties that expect to form government would typically take a four– or eight–year time out than shut themselves out from total power in perpetuity. Under PR, it would be unlikely for any party to form a majority government on their own. Instead, parties would be incentivized to negotiate and cooperate with other parties: to govern as a minority or form a coalition.

Parties with a history of governing would rather take all the power half the time than half the power all the time—it’s how they’re wired.

For big-tent partisans, the world is red or blue, black or white, government or opposition. You win however you win; those are the rules. For Canadians, who are not typically partisan—and if they are, they’re probably weak partisans—reality is different: they’d prefer cooperation; they’d prefer negotiation. But, alas, for political elites—Liberals and Conservatives—that’s a non-starter, even when they suffer the slings and arrows of their fickle, preferred system.