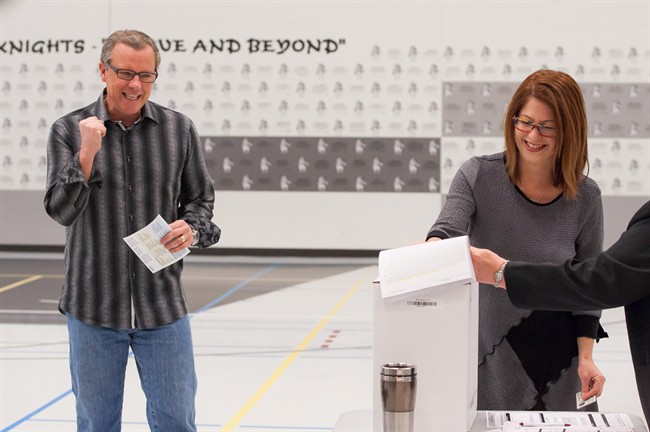 “You can expect a government that will stand up for Saskatchewan’s interests (in) every sector of the economy every time it’s challenged,” Wall, his wife Tami beside him, told cheering supporters at his campaign headquarters in Swift Current.

“You can expect a government that is proud of oil and gas in this province,” he said.

Wall, 50, has carved out a niche on the national stage as a defender of the province and a strong voice for small-c conservatives, especially in the West.

He has been an outspoken champion for those seeking a trans-national pipeline to get oil to tidewater and has openly criticized recent federal employment insurance changes that ignored a wide swath of workers in his resource-based province as it fights a slowdown in oil and gas and potash.

It was an anticlimactic win for Wall. Polls throughout the campaign had suggested his party would defeat the rival NDP for the third time since 2007.

Voting results showed the Saskatchewan Party heading towards 51 seats in the 61-seat legislature. The party also took about two-thirds of the popular vote.

The New Democrats under leader Cam Broten did little to better their showing from last time, adding only one seat to their pre-election total of nine.

Broten, running in his first campaign as leader, lost a tight race in Saskatoon Westview. It was disappointing deja vu for the NDP. Party leader Dwain Lingenfelter lost his Regina seat in the 2011 election.

“This isn’t quite the night that we were hoping for,” said Broten, who addressed supporters while still waiting for a final result in his constituency.

“(But) we will always work hard to build a stronger, a fairer, and a kinder Saskatchewan.”

Cathy Sproule, who did win a seat for the NDP in Saskatoon, said the party is likely to ask for a judicial recount.

Wall handily won his Swift Current seat, which he has held since he was first elected in 1999.

All of his cabinet ministers were returned.

Broten’s NDP knew it was facing a formidable foe in Wall, who consistently polls as one of the most popular premiers in Canada.

Wall spent most of the 27-day campaign talking about his party’s record. The premier said the ballot box question was about the economy and which party would best protect and create jobs in the province.

“We didn’t make a lot of promises in this campaign. We said we wouldn’t,” said Wall.

“We weren’t going to get into an auction bidding with someone else’s money.”

Political scientist Charles Smith said Wall’s victory is welcome relief for Canada’s conservatives, who have seen their power disappear in Ottawa to Justin Trudeau’s Liberals and in Alberta to Rachel Notley’s NDP.

“Had he gone down to defeat, there would have been no conservatives at any level of government, federally or provincially,” said Smith from the University of Saskatchewan.

On the hustings, Broten, 37, hammered on the message that the sheen was off the Wall government. The province is running a $427-million deficit this year. Wall is expected to table another deficit budget for the coming year, but said Monday night that wouldn’t happen until late May or June.

Political scientist Tom McIntosh said Wall’s third term is likely to be rougher than the first two given the worsening economy.

“This is going to be a government now that’s going to have to make some difficult choices in a way that it hasn’t had to in its first two terms,” said McIntosh of the University of Regina.

The Saskatchewan Party had 47 seats at dissolution in a 58-seat legislature compared with nine for the NDP. There were two vacancies. Riding redistribution since the 2011 election added three seats for a total of 61.