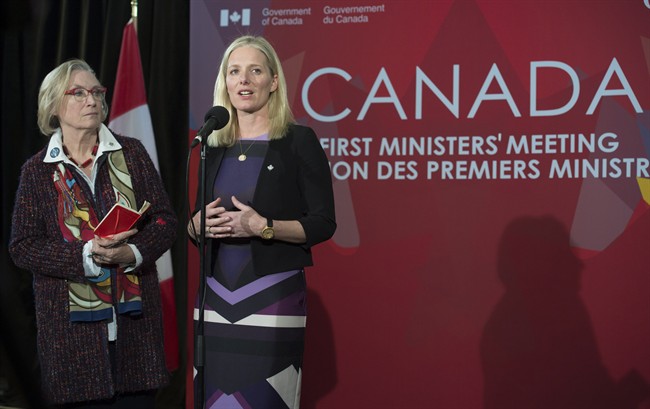 Indigenous and Northern Affairs Minister Carolyn Bennett looks on as Minister of Environment and Climate Change Catherine McKenna, right, responds to a question during a media availability at the First Ministers’ Meeting in Ottawa, Friday, December 9, 2016. THE CANADIAN PRESS/Adrian Wyld

As chair of the premiers, Yukon’s Sandy Silver advised Prime Minister Justin Trudeau at the outset of the meeting that premiers wanted to talk about federal funding for health care, according to sources familiar with the closed-door talks.

But Trudeau quickly directed the discussion back to the environment.

Trudeau and the premiers will get a chance to discuss health later Friday over a working dinner.

Premiers, who had previously requested a separate first ministers meeting with Trudeau to discuss health, are unanimously opposed the federal plan to slash the annual increase in health transfer payments to the provinces from six to three per cent in April.

Push-back was on full display Friday morning as the premiers emerged from their own meeting, which was focused on health spending, before joining Trudeau.

Saskatchewan Premier Brad Wall said he wished there was more time to discuss health with Trudeau.

“We could have been talking about it last night but there was this other thing,” Wall said, referring to a state dinner Thursday for U.S. Vice President Joe Biden.

Wall said he hopes the federal government is urgently looking to get a new health accord with the provinces in place by year’s end.

The federal government’s approach to health spending is not “remotely close” to sustainable, said Manitoba Premier Brian Pallister, noting provinces are quickly approaching budget-making time and it is imperative the issue be resolved soon.

Some provinces have shown a willingness to accept a reduced annual increase in health transfers if, at the same time, the federal government agrees to put more money, over a longer period of time, into a health accord that targets improvements in homecare, mental health services and innovation.

So far, the federal Liberals have promised $3 billion over four years, specifically for homecare, but they’ve signalled a willingness expand that.

Pallister would not prejudge the outcome of the dinner discussion but said it puts “tremendous pressure” on the premiers to come up with a solution to a complex public policy issue “between bites.”

He argued that the health transfer should continue to increase at a rate of six per cent until Trudeau and the premiers have a chance to sit down and negotiate a new arrangement.

Ontario Premier Kathleen Wynne said she wants the federal government to present an “evidence-based” increase in the annual transfer, stressing that the offer presented so far “is not enough.”

Wynne said there is room to talk about tradeoffs between the health transfer payments and additional targeted health investments.