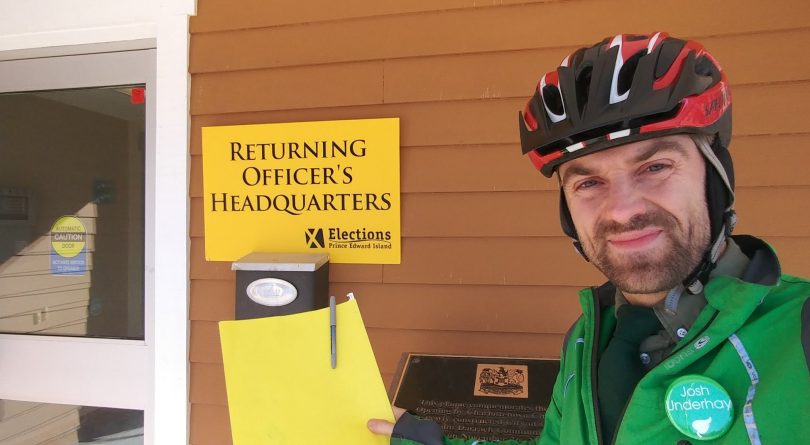 Josh Underhay posted this photo after being named Green Party candidate for Charlottetown-Hillsborough Park. He and his six-year-old son Oliver were killed on Friday in a canoeing accident. (Josh Underhay/Twitter)

Prince Edward Islanders prepared to go to polls in a state of collective grief in what surveys and seat projections suggest could be a historic win on Tuesday for the provincial Green Party.

Few in Canada’s smallest province were unaffected by the news that Green candidate Josh Underhay, 35, and his six-year-old son Oliver died in a canoe accident on Good Friday. Their bodies were found at 7 p.m. near their capsized red canoe on the Hillsborough River, P.E.I.’s largest inland waterway, which flows into Northumberland Strait below Charlottetown Harbour. Both were wearing flotation devices.

“The past two days have been among the most difficult of my political life,” said Green Party leader Peter Bevan-Baker in a statement, adding that he’s been overwhelmed by his private grief at the death of a close friend who was also a key candidate for his party.

The island, which in times of crisis becomes one big, close-knit community, went into mourning on Easter weekend alongside Bevan-Baker and Underhay’s family. Within hours of the news, all parties had cancelled their advertising, canvassing and events for the last two days of the campaign. Volunteers in Underhay’s riding of Charlottetown-Hillsborough Park took down his campaign signs.

On Saturday, provincial election officials announced that the vote in Underhay’s riding has been postponed, though a referendum on proportional representation in the province will go ahead there on election day, as planned. The date of a byelection for the constituency will be set within the next few weeks.

The three other party leaders were quick to extend sympathies. NDP leader Joe Byrne, who has known Underhay for many years, and whose party is last place in the polls, perhaps said it best: “Politics at a time like this seems so trivial and yet here we are at a time when we are mourning the loss of these two wonderful people at the end of a campaign.”

Progressive Conservative leader Dennis King said islanders are heartbroken and that Underhay left a lasting impression on everyone who knew him. Liberal incumbent leader Wade MacLauchlan commended Underhay’s contribution to the province in promoting active transportation and as a teacher. At the Charlotteown junior high school where Underhay taught, students and staff planned to wear green T-shirts on election day in his memory.

Prime Minister Justin Trudeau tweeted his condolences, calling the accident “absolutely heartbreaking.” He praised Underhay’s commitment to serving his community and his students.

RELATED: Ontario’s first Green Party MPP: Why even a single voice is important

On Sunday, several Green Party of P.E.I. candidates met with grief counsellors at the provincial campaign office in downtown Charlottetown. Campaign offices are open, but the rah-rahs and enthusiasm that are par for the course in any election weren’t in evidence. “It’s been quiet,” said party communications director Shannon Carmont. “We’ve not had a large public presence here in the campaign office.”

Some were quietly showing support by donating to the GoFundMe page for Underhay’s family, his wife Karri Shea and younger son Linden, which by Monday had raised nearly $82,000.

Amid the sense of loss, the election carries potentially historic implications, as islanders are poised to vote in Canada’s first Green government. Bevan-Baker, a Scottish-born dentist, had been rising in popularity in the polls for more than a year.

He was one of two Green MLAs in the provincial assembly when the election writ dropped, while the governing Liberals had 16, the Progressive Conservatives had eight and one member was sitting as an independent. But two recent polls put the Green party ahead of the three other parties on the island, raising the possibility of a win or at least a minority government. The last time P.E.I. elected a minority was 1890.

An MQO Research poll found the Green Party had a robust lead with 40 per cent of the vote, while the Progressive Conservatives had 29 per cent, Liberals 26 per cent and the NDP 3 per cent. The margin of error is 5.7 percentage points.

A Narrative Research poll sponsored by P.E.I.’s provincial newspaper, The Guardian, found the Greens with 35 per cent, PC’s with 32, Liberals with 29 and the NDP at 3. The poll has a 4.5-point margin of error.

Islanders have been electing either Liberal or Conservative governments since Confederation, Canadian Press noted in a recent analysis, with governments regularly being replaced after three terms since the mid-60s.