Later Saturday in Tucson, Arizona, dozens of protesters made their way into another Trump rally 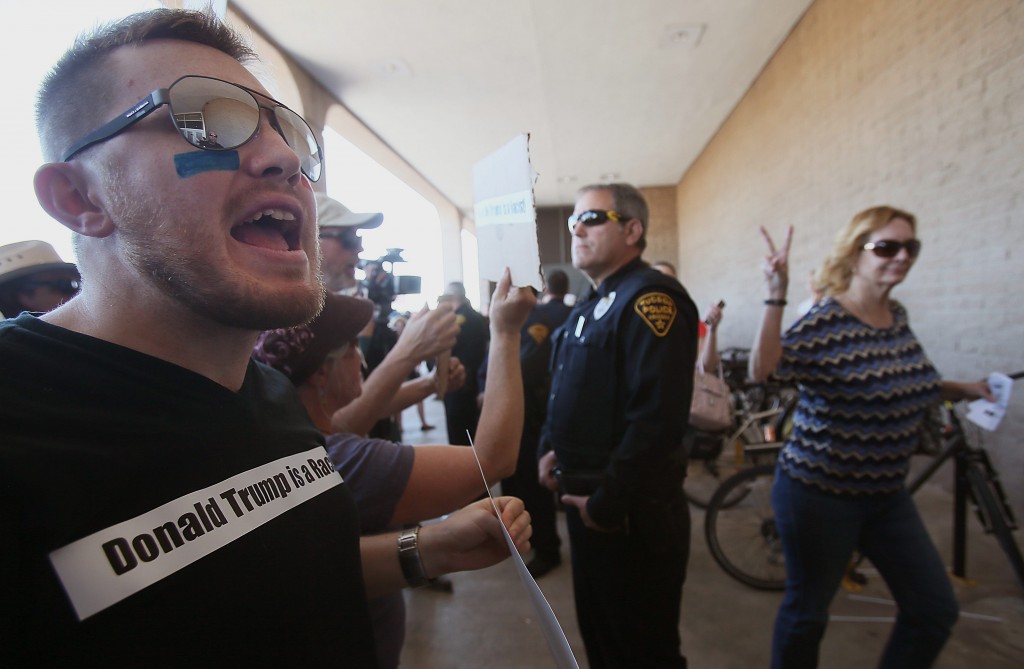 Tempers flared at the rally itself, but without the violence that marred Trump’s event in Chicago a week earlier. He never goaded the protesters as he usually does at campaign events.

For hours, about two dozen protesters parked their cars in the middle of the main road to the event, unfurling banners reading “Dump Trump” and “Must Stop Trump,” and chanting “Trump is hate.” Traffic was backed up for miles, with drivers honking in fury.

The road was eventually cleared and protesters marched down the highway to the rally site, weaving between Trump supporters who booed and jeered them.

Trump was in Arizona to campaign ahead of Tuesday’s primary in which the winner will take all 58 delegates at stake. Polls show Trump leading his rivals in Arizona, a border state where Trump’s hard-line on immigration has drawn support from Republican voters.

Trump was introduced at the rally by Joe Arpaio, the tough-talking sheriff of Maricopa County, which includes Phoenix and nearly two-thirds of Arizona’s population. Arpaio has supported harsh measures to deal with immigrants living illegally in the U.S. He has forced inmates to wear pink underwear and live outside in tents during triple-digit Fahrenheit (temperatures above 38 degrees Celsius) heat.

Trump’s main rivals, Texas Sen. Ted Cruz and Ohio Gov. John Kasich, are desperately trying to prevent the real estate mogul from accumulating the 1,237 delegates needed to secure the nomination at the party’s national convention in July. They are hoping for a contested convention in which delegates would be freed to turn from Trump if he fails to win a majority on the first ballot. Trump has won 678 delegates in contests held thus far, according to a count by The Associated Press. Cruz is in second place with 423 delegates, and Kasich is in third with 143.

His rivals hope to offset a likely Trump win in Arizona on Tuesday with a strong showing in the Utah caucuses, where Mormons account for two-thirds of the state’s 3 million residents. Limited polling shows Trump running second to Cruz, but ahead of Kasich, said Jason Perry, director of the Hinckley Institute of Politics at the University of Utah. The delegates will be distributed according to percentage of votes – unless a candidate gets more than 50 per cent, which would give that person all 40 delegates.

Mitt Romney, the 2012 Republican presidential nominee and the Mormon faith’s most visible member, said he intends to vote for Cruz in the caucuses, but stopped short of endorsing the Texas senator, an uncompromising conservative.

In Arizona, thousands of Trump supporters gathered for the outdoor rally in the Phoenix suburb of Fountain Hills where Arpaio lives. Officers with the sheriff’s department were posted throughout the park, on rooftops and on patrol.

Trump vowed to rebuild the military and build a border wall with Mexico. He drew cheers from the crowd when he vowed to protect the Second Amendment of the U.S. Constitution which guarantees the right to bear arms.

Trump supporter David Nelson, 62, had to walk about 4 miles (6.5 kilometres) to the rally because demonstrators had blocked the road.

“You don’t see me at Bernie’s disrupting their crowd,” he said, referring to Democratic candidate Bernie Sanders, who was campaigning on the Arizona-Mexico border on Saturday. “I give them respect.”

Standing in front of the tall, steel fence that divides the U.S. and Mexico, Sanders vowed to keep immigrant families together during a visit to Arizona.

Sanders was accompanied by Santa Cruz County Sheriff Tony Estrada and U.S. Rep. Raul Grijalva. He started the day walking along a small street next to the Nogales-Morley Gate Port of Entry, where he spoke with two young immigrants about their struggles to obtain legal status in the United States. A small group of people who identified themselves as deported U.S. military veterans stood on the Mexican side of the border fence cheering for Sanders.

“I would hope that all of us are rightly appalled by the divisive, bigoted and xenophobic comments of people like Donald Trump,” Sanders said.

Sanders vowed to expand two programs spearheaded by President Barack Obama which aim to protect immigrants in the U.S. illegally from deportation.

Late Saturday he held his fourth Arizona rally in the past five days, this time just outside of downtown Phoenix. Sanders is hoping for a win in Tuesday’s Arizona primary to propel him through the next month when several states more favourable for him are due to vote. “Please, on Tuesday, make sure that you, your friends, your family come out to vote,” he told the crowd. “Let us see Arizona help lead a political revolution.”

He has also sought the Latino vote in Arizona, aggressively challenging Arizona’s contentious Sheriff Joe Arpaio, who has endorsed Trump, in a speech for his harsh immigration tactics.

“It’s easy for bullies like Sheriff Arpaio to pick on people who have no power,” Sanders said. “If I am elected president – the president of the United States does have power. So watch out, Joe.”

The Vermont senator has focused his campaign almost exclusively on Arizona in the past week as he looks to rebound from his defeat last Tuesday in five state contests to Hillary Clinton, which gave the former secretary of state an almost insurmountable lead of more than 300 pledged delegates. He was also scheduled to hold another rally late Saturday in Phoenix.

Clinton is making her own last-minute push to win Arizona. Former President Bill Clinton is campaigning for his wife in the state on Sunday, and the former first lady and secretary of state has a rally Monday.

Some had feared that the event in Fountain Hills could devolve into violence reminiscent of last week’s Trump rally in Chicago, which was cancelled over safety concerns. Confrontations involving protesters, Trump supporters and police have become standard at Trump rallies across the country.

Later Saturday in Tucson, Arizona, dozens of protesters made their way into another Trump rally and interrupted Trump as he spoke. In typical form, Trump had the protesters kicked out, but urged the crowd of about 1,000 people to be nice to them.