Public lukewarm on Liberal-NDP accord 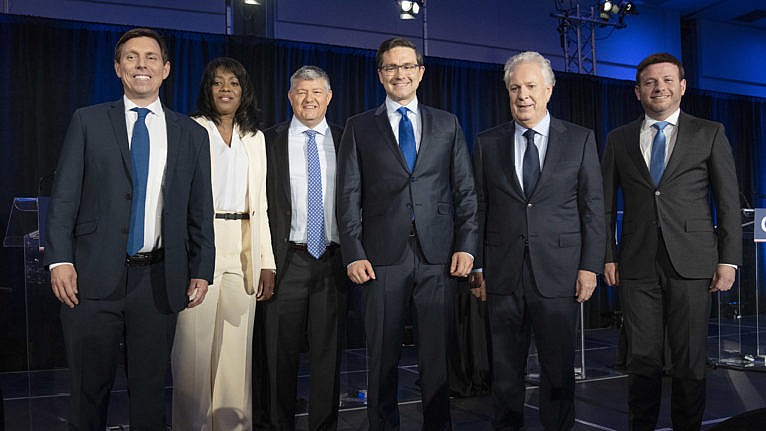 Nearly 60 per cent of Canadians are at least somewhat comfortable with the NDP-Liberal governing deal, according to a new Nanos Research poll for the Globe. Under the deal (which was first reported by your correspondent, by the way) the NDP agreed to prop up the Liberals until 2015 in exchange for progress on dental care, pharmacare and other priorities.

Many members: CPC leadership candidates say they’ve sold hundreds of thousands memberships, CP reports.  Pierre Poilievre’s campaign claims to have signed up more than 311,000 people before Friday’s deadline — more than the total number of members who were eligible to vote in the last two leadership races. Patrick Brown’s team says it sold more than 150,000 memberships.

Rancorous: The race may be lively, but it is not entirely friendly. Abbas Rana of the Hill Times, has been talking to “Conservative political insiders” who are rattled by the intensity of the rhetoric.

A senior Conservative, who spoke to The Hill Times on a not-for-attribution basis to offer their candid opinions, said that the divisive tone of the campaign has been a “huge” cause of concern for elected and unelected party officials. At the same time, this person said, there’s no tool that the party or the Opposition Leader’s Office has to stop this from happening, other than to urge these candidates to exercise restraint. Former Reform Party leader Preston Manning and Alberta Premier Jason Kenney have called on all leadership candidates to focus only on policy differences and not take personal shots at each other.

Susan Delacourt, in the Star, notes that the recent Ontario election seemed to be much less interesting to people than the CPC leadership race.

Brutal: Speaking of the Ontario election, Liberals there are struggling to understand why they did so poorly and what they should to change that in the future, the Star reports.

Hungrier: A poll conducted for Food Banks Canada suggests a growing number of Canadians are struggling with the rising cost of food, CP reports.  The Mainstreet Research poll found almost a quarter of Canadians reported eating less than they should because there wasn’t enough money for food.

Unsafe: At a news conference on Monday, Justin Trudeau called the actions of Chinese pilots towards Canadian planes taking part in a UN mission “irresponsible and provocative,” CP reports. Last week, the Canadian military accused Chinese planes of not following international safety norms on several occasions and putting a Canadian crew at risk.

Charges dropped: The Crown dropped tax evasion charges against former Calgary MP Rob Anders in Calgary on Monday on what was supposed to be the first day of a two-week tax evasion trial, CBC reports. Prosecutor Tyler Lord said “new information” led him to believe he “no longer had a reasonable prospect of conviction.”

Until Monday, Anders faced five charges under the Income Tax Act for alleged activity between 2012 to 2018, including three counts of making false or deceptive statements, obtaining a refund he was not entitled to and evading payment of taxes.  Anders was accused of failing to report more than $750,000 in income over a six-year period including alleged offences which overlapped with his time in government.

Not guilty plea: Federal public servant Matthew Matchett pleaded not guilty Monday to breach of trust for allegedly leaking secrets about a contract between the federal government and Chantier Davie shipyard in Quebec in November 2015, CP reports. Matchett, who was charged in February 2019, has elected to be tried by jury and the trial is expected to run four weeks.

Shake-up at CAPP: Three senior executives are out at the Canadian Association of Petroleum Producers, the Globe reports. Lisa Baiton recently took over from former president and CEO Tim McMillan.

CSIS bill proposed: Liberal MP Salma Zahid announced a plan Monday to introduce a bill that would set out new consequences for CSIS if the spies aren’t forthcoming in their requests for judicial warrants, CP reports. Zahid was joined at the press conference by the National Council of Canadian Muslims.

Broad powers: In the Globe, Campbell Clark is concerned about the implications of broad new search powers in Quebec’s Bill 96.

Anglos unhappy: In Ottawa on Monday, Quebec anglophones told a parliamentary committee that Bill 96 will create a two-tier system in Quebec, La Presse reports (translation), and expressed disappointment over the federal government’s actions on the file to date.

So-con in the lead: In the Calgary Herald, Don Braid has an interesting column about Travis Toews, the Jason Kenney loyalist who has rounded up plentiful caucus support for his leadership bid. Toews, though, is a social conservative.

It’s been known since 2019 that he was on the board of a school that banned same-sex attachments, Ouija boards and even yoga, the latter being, it seems, proof of demonic intervention. The school forbade spell-casting, witchcraft and sorcery. “Our body is not our own,” it declared. I’m told Toews will promise not to bring his beliefs into government regarding religion, LGBTQ rights, abortion, or sex outside marriage.